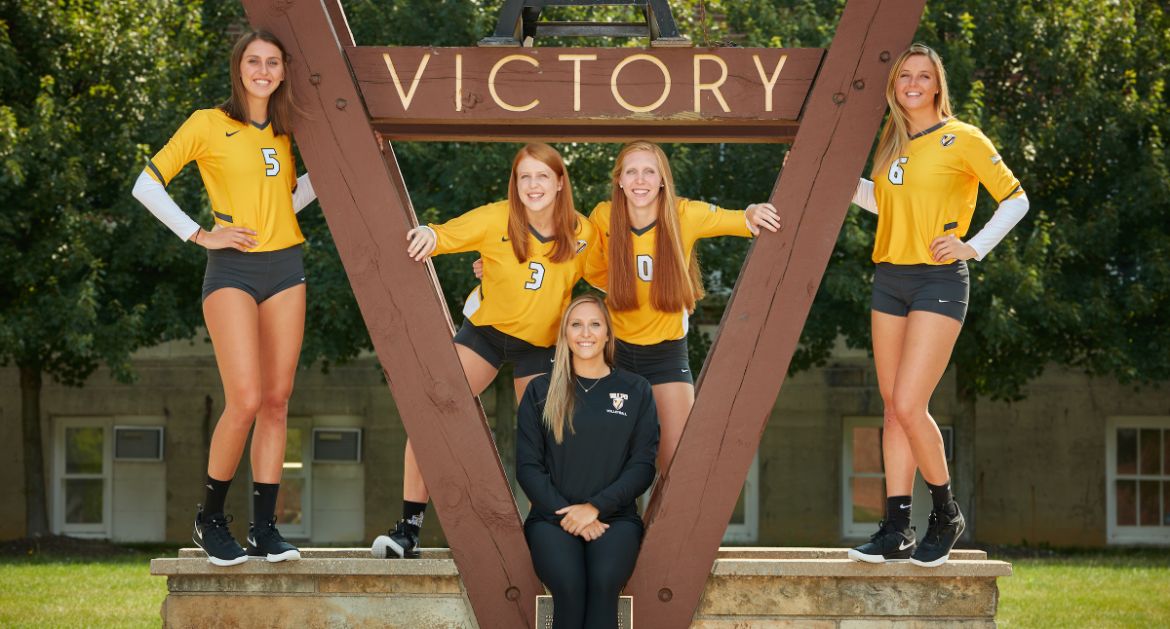 This Week in Valpo Volleyball: After securing a spot in the upcoming MVC Tournament with a come-from-behind win at Loyola last week, the Valparaiso University volleyball team faces a pair of key matches in battles for tournament seeding this weekend. Valpo hosts Bradley, which currently resides just one-half game ahead of Valpo for third place, on Friday evening before welcoming first-place Illinois State on Saturday for Senior Night.

Previously: For it to happen once in one season is rare enough. For it to happen twice, against the same opponent, is almost unheard of. But last Friday night in Chicago proved to be that one-in-a-million moment, as for the second time this season, Valpo rallied from down two sets to earn a 3-2 (15-25, 22-25, 25-16, 25-20, 15-12) victory over Loyola, led by a career-best 24 kills from senior Katherine Carlson.

Looking Ahead: Valpo closes the regular season next weekend with the Missouri State/Southern Illinois road trip.

Following the Action: Both of this weekend’s matches will be broadcast through The Valley on ESPN, with Friday night’s match on ESPN3 and Saturday’s on ESPN+. Live stats will be available as well for both matches.

Head Coach Carin Avery: In her 17th season as head coach at Valparaiso, Carin Avery has won 393 matches (393-174, .693) at the helm of the Crusaders and has led Valpo to three league regular season and tournament titles, as well as three NCAA Tournament appearances. A two-time league Coach of the Year, Avery has coached 55 All-League recipients over her tenure at Valpo. She is Valpo’s all-time leader in both victories and winning percentage, and owns 448 career victories overall as a head coach.

Celebrating the Seniors: Valpo will recognize seniors Sydney Bronner, Katherine Carlson, Kayla Currier, Allison Ketcham and Lizzie Zaleski prior to Saturday’s match, the final home match of their careers at the ARC. Over the last four seasons, Valpo has won 81 matches and counting, including a pair of 20-win campaigns. They have helped the program to a berth in the Horizon League title match in 2015 and have led the way as Valpo has transitioned into the Missouri Valley Conference.

Like Deja VU: It had happened only eight times in Carin Avery’s first 16 seasons as head coach of the Valpo volleyball program - rallying from down two sets to win a match 3-2. But incredibly, on Friday night, Valpo completed the come-from-behind win at Loyola for the second time in less than a month, storming back to take sets three, four and five to down the Ramblers in both meetings this season. Prior to this season, Valpo had rallied from down 2-0 to win 3-2 just once in the last five years.

In the Field: The win over Loyola proved to be vital, not just for momentum entering the final two weekends of conference play, but the victory - combined with a pair of Drake losses last weekend - secured Valpo’s spot in the six-team field for the upcoming MVC Tournament. The worst Valpo can do now is finish in a tie at 9-9 with Drake, but any combination of tiebreakers would leave the Crusaders ahead of the Bulldogs. Valpo currently sits in fourth place, just one-half game behind Bradley in third and one game ahead of Missouri State in fifth.

Huge Night From KC: While the first five-set win over Loyola featured a balanced team effort offensively, last Friday’s win was highlighted by a career night from senior Katherine Carlson at the net. Carlson posted a new career high with 24 kills on .444 hitting, her highest single-match hitting percentage since her freshman season. The 24 kills also matched the most kills by a Valpo hitter since 2015. 11 of Carlson’s kills came in the fourth set alone to help the team force the decisive fifth set - tied for the second-most kills in a single set in Avery’s tenure at Valpo (Nicole Schulz, 13 kills vs. Western Illinois, 2006 Mid-Con semis). Carlson’s fourth set was also the 14th time in Avery’s tenure a hitter picked up at least 10 kills in a single set, and her .733 hitting percentage in that set was the best of any of those 14 performances.

Just Win, Baby, Win: Valpo now has 22 victories on the season, the 15th time in Avery’s 17 seasons that Valpo has won 20 or more matches. This year marks the seventh time out of Avery’s 15 20-win teams that the program reached the 20-win mark within the season’s first 25 matches. Valpo also already owns nine MVC wins to surpass its conference total of eight from last season, with four conference matches left on the docket.

RPI Ranks: Valpo still sits in strong position in the latest NCAA RPI release, coming in at 68th nationally. Valpo is one of three MVC squads in the top-70, joined by UNI (15th) and Illinois State (34th). Valpo has posted a top-100 RPI finish just three times in the tenure of head coach Carin Avery, and not since 2008 (67th). Valpo’s best-ever RPI finish came in 2004, when it clocked in at 55th position.

Among the Nation’s Best: Entering this weekend, no team in Division I has tallied more total digs than Valpo’s 1,959 digs this year. Valpo also ranks 10th nationally in digs/set, looking for its ninth straight season of placing among the top-20 in the nation in the latter category. Individually, Rylee Cookerly ranks 43rd in digs/set and Brittany Anderson ranks 45th in assists/set. Then, among active career leaders, Allison Ketcham (2nd) and Katherine Carlson (12th) both rank among the D-I leaders in career matches played, while Carlson ranks 14th in service aces and Ketcham 25th in digs. Cookerly currently ranks second in career digs/set, and Anderson 16th in career aces/set.

Moving Up the Charts: Senior Katherine Carlson moved in Valpo’s career top-10 in kills and hit ninth place last time out, entering this weekend with 1,146 kills. Meanwhile, Allison Ketcham is right behind her in 11th with 1,125 kills. Once Ketcham surpasses the current 10th-place total of 1,134 kills (Sarah Dooms), they will be the first set of classmates to rank among Valpo’s career top-10 in the category.