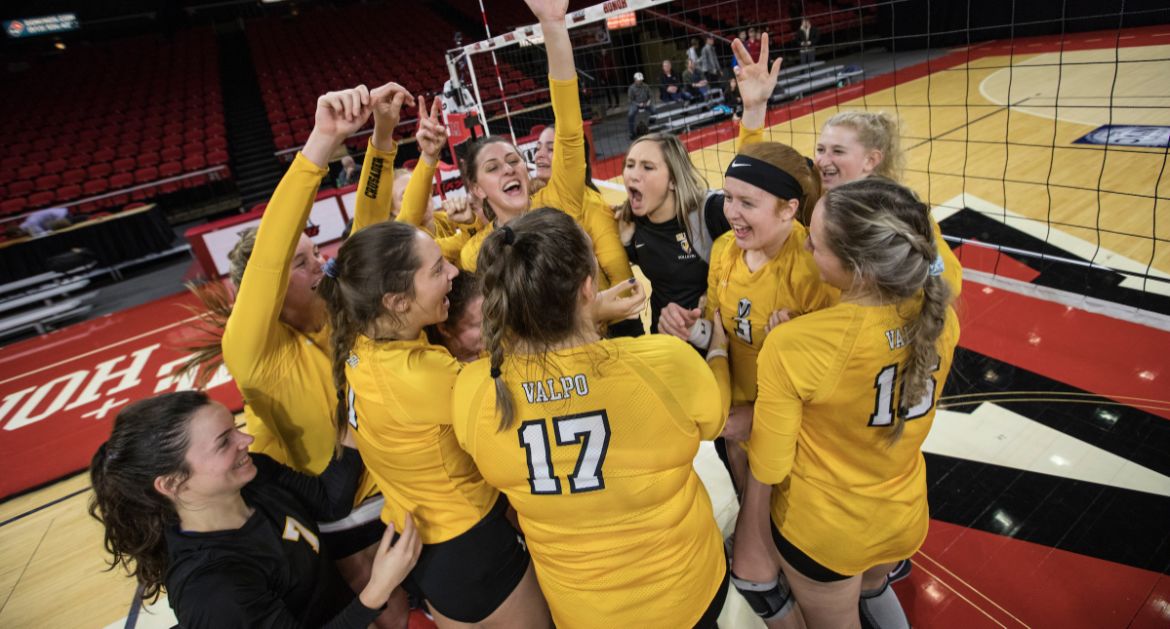 Next Up in Valpo Volleyball: The Valparaiso University volleyball team looks to continue the best postseason run in program history on Thursday evening as it takes to the court in Bayou Country, facing off against Tulane in New Orleans in a quarterfinal match in the 2018 National Invitational Volleyball Championship.

Previously: Making the first NIVC appearance in program history and its first postseason appearance of any sort since 2005, Valpo was up to the task last week in Oxford, Ohio, dispatching Ball State in four sets to earn the program’s first-ever postseason victory and following that up with a three-set sweep of host Miami to advance to the quarterfinals.

Looking Ahead: The winner of Thursday’s Valpo-Tulane quarterfinal match will face the winner of the match between Clemson and College of Charleston on either Saturday or Sunday in the semifinals at a site to be determined. Iowa State, North Texas, UNLV and Portland remain alive on the other side of the bracket.

Following the Action: Thursday night’s match can be seen online through Tulane’s all-access video portal, which includes a 24-hour viewing option. A direct link for the video broadcast, as well as live stats, will be available at ValpoAthletics.com.

Head Coach Carin Avery: In her 17th season as head coach at Valparaiso, Carin Avery has won 398 matches (398-177, .692) at the helm of the Crusaders and has led Valpo to three league regular season and tournament titles, as well as three NCAA Tournament appearances. A two-time league Coach of the Year, Avery has coached 57 All-League recipients over her tenure at Valpo. She is Valpo’s all-time leader in both victories and winning percentage, and owns 453 career victories overall as a head coach.

Series History: Thursday will be the first meeting all-time between Valparaiso and Tulane on the volleyball court. In fact, Valpo has faced just three current AAC programs all-time and owns a 4-2 combined record against those three institutions - 1-0 versus UCF, 3-0 against Cincinnati and 0-2 against Memphis. Valpo’s last matchup against an AAC school came to open the 2013 campaign on Aug. 30 as part of the UCF Invitational, as Valpo defeated the Knights, 3-2.

Looking ahead, Valpo has previously faced five of the other six schools still alive in the NIVC: Clemson (0-1), Iowa State (0-4), North Texas (1-1), Portland (1-0) and UNLV (0-1). A matchup against College of Charleston would be the first in program history as well.

Scouting the Opposition: Tulane enters Thursday’s NIVC quarterfinal match at 27-8 overall and posted a 13-5 record this season in the American Athletic Conference. The Green Wave is 16-2 at home so far this year, including a 3-2 victory over Arkansas State and a 3-1 win over Cal Baptist in the first two rounds of the NIVC. Tulane’s balanced offense features five different players averaging better than two kills/set, led by 2.65 kills/set from junior right side Erika Hansel. Senior middle Dayna Kern hits at a team-best .314 clip and also leads the Green Wave with 1.18 blocks/set, while in the back row, junior libero Kaylie McHugh picks up 4.37 digs/set.

Milestone Win: Valpo earned the first postseason win in program history with Thursday’s four-set win over Ball State in the opening round of the NIVC. Prior to the victory over the Cardinals, the Crusaders had won just two sets combined over their previous six postseason outings.

The key to the win laid within the attack errors on both sides. Valpo hit .233 for the match with just 14 attack errors, and outside the second set, hit .309 with just nine hitting errors. Meanwhile, Ball State actually held a 47-45 advantage in kills, but hit just .150 as it committed 26 attack errors. 11 of BSU’s 26 attack errors came courtesy of Valpo blocks, led by six rejections from Sydney Bronner and five from Brittany Anderson.

So Nice, We’ll Do It Twice: Valpo’s win over Miami in straight sets on Friday was the first match for the Crusaders to end in the minimum three sets in quite some time. The last time a Valpo match had ended in three straight was Valpo’s sweep of Drake in Des Moines on Oct. 27, 10 matches prior to Friday’s win over the RedHawks. Nearly half of Valpo’s first 27 matches of the year were decided in just three sets (13, 11-2) until the stretch of nine consecutive matches that went at least four sets prior to Valpo’s sweep of Miami.

Avoidance of unforced errors proved to be key in the win over the RedHawks, just as it was the previous night. Valpo hit .241 with 37 kills against just 10 attack errors – five of which were Miami blocks – while the RedHawks hit just .100 with 33 kills against 21 errors. Katherine Carlson led the way with 12 kills on .263 hitting, while Sydney Bronner hit .375 with eight kills.

Everything Has Changed: Given how deep this year’s run into the postseason has gone, and how many sets this year’s squad has played, there have been numerous additions to the program’s single-season record books. Notably, as a team, the 2018 Valpo squad has already set single-season program records for digs (2,562) and attacks (5,545). With 2,562 digs this year, the 2018 team is also just 20 digs away from breaking the NCAA record for most digs in a single season in the 25-point rally scoring era by any D-I team. Individually, Rylee Cookerly is just 32 digs away from the program’s single-season record in the category.

Highway Don’t Care: Valpo has enjoyed tremendous success when traveling away from home this season, as the team is 19-6 overall when playing away from the ARC. This year’s squad is 12-4 in true road matches, including six straight victories dating back to Oct. 27, and owns a 7-2 mark in neutral-site affairs. The 12 true road wins are the most by a Valpo team since the 2010 squad went 14-3 in true road matches.

Long Live: When fifth-year senior Allison Ketcham laces up her shoes for Thursday’s match, she’ll be taking the court in a Valpo uniform for the 147th time. That mark is a Valpo Volleyball record, but beyond that, it is the most matches played by an active NCAA player in any division. Ketcham played eight matches in her junior year of 2016 before taking a medical redshirt, and has not missed a match in any of her four full seasons.

Nearing Milestones: This year’s Valpo team is tied for second in program history for single-season wins with 27, just two shy of the 2004 squad’s total of 29 which stands as the program record. If this year’s team could win two more matches to tie the program record and advance to the NIVC championship match, it would also mean that head coach Carin Avery would reach 400 wins as head coach at Valpo.

Just Win, Baby, Win: Valpo enters the quarterfinals of the NIVC with 27 victories on the season, the 15th time in Avery’s 17 seasons that Valpo has won 20 or more matches. This year’s squad is the eighth for Avery with at least 25 victories. This year also marked the seventh time out of Avery’s 15 20-win teams that the program reached the 20-win mark within the season’s first 25 matches.

Begin Again: It’s not often you see a player return this late in the season from injury, but that’s what Valpo found in senior middle Sydney Bronner last week. Bronner had not played since Oct. 5 due to an ankle injury, missing 14 matches in the process - the final 12 regular season contests, as well as Valpo’s two MVC Tournament matches. But Bronner was back in the starting lineup for the Ball State match, and hit .353 with 2.14 kills/set over the wins last week while adding a match-high six blocks in the first-round win over the Cardinals.

The Outside: Seniors Katherine Carlson and Allison Ketcham have been the most productive pair of classmates on the outside in program history. They are the only set of classmates to both rank among Valpo’s all-time top-10 in kills (Carlson 6th, Ketcham 7th), and are two of just nine members of Valpo’s 1,000-kill/1,000-dig club. Carlson also ranks fifth in program history in career service aces, while Ketcham is fourth all-time at Valpo in career digs. Carlson ranks 15th among all active D-I players in aces and Ketcham is 21st among active D-I players in digs. Carlson was named a Second Team All-MVC honoree this year.

Setting Things Up: Sophomore setter Brittany Anderson, a First Team All-MVC selection, has played every set at the position since stepping on campus, and this season has produced one of the top assist totals in program history. Anderson currently is second in a single season in program history in assists with 1,495 total assists, which ranks third nationally. This comes with her playing the last third of the regular season with extra blocking responsibilities playing with just one middle. For her career, she is already eighth in program history in assists, owns the second-most assists through two seasons in program history and the most in the rally-scoring era, and ranks 18th nationally among active D-I players in career assists/set (10.54).

Leading the Back Row: Much like Anderson, sophomore Rylee Cookerly has played every set at libero since coming to Valpo. She currently ranks third among active D-I players in career digs/set with 5.44 digs/set. Cookerly has picked up 722 digs this season, fourth-most in a single season in program history. With 1,408 career digs through two seasons, Cookerly is already 10th in Valpo program history in the category and is 68 digs ahead of Taylor Root’s total through her first two years - Root went on to set Valpo’s career record in the category and currently ranks fifth in NCAA history in career digs.