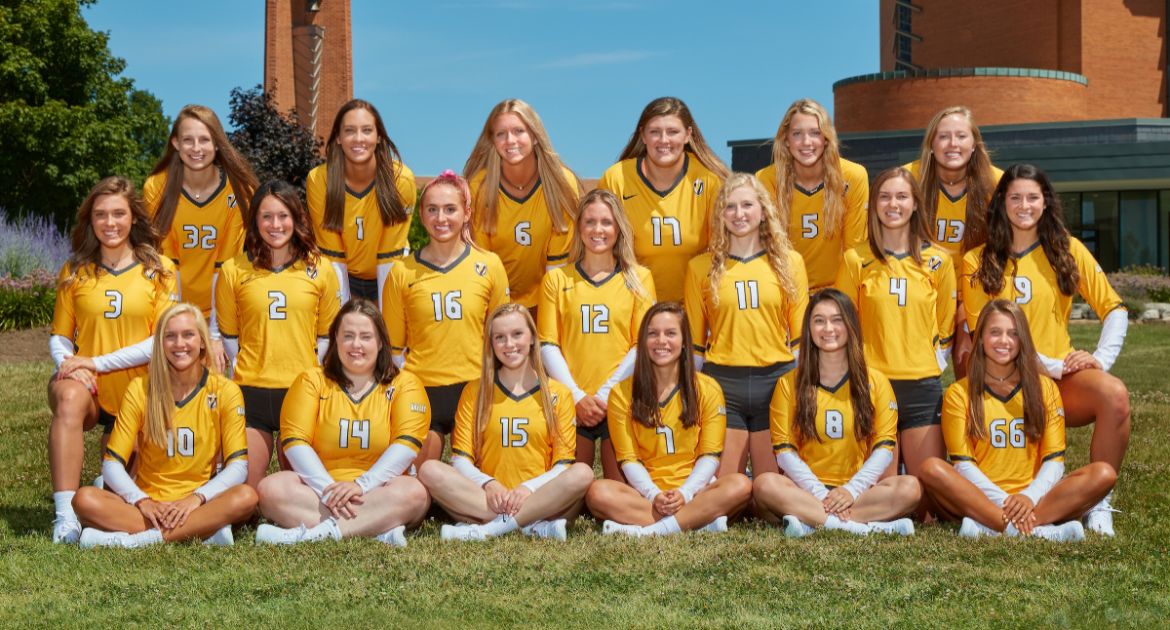 This Week in Valpo Volleyball: The Valparaiso University volleyball team kicks off the 2019 season this weekend with a trio of matches at IUPUI’s Hampton Inn Invitational. Valpo opens the campaign against Murray State Friday night and faces South Dakota Saturday morning before taking on the host Jaguars Saturday evening.

Looking Ahead: Valpo makes a short mid-week trip east next Wednesday to take on Notre Dame on the ACC Network before heading to Kent State for the Golden Flashes Classic next weekend.

Following the Action: Live stats for all three matches this weekend will be available via ValpoAthletics.com

Head Coach Carin Avery: In her 18th season as head coach at Valparaiso, Carin Avery has won 398 matches (398-178, .691) at the helm of the Crusaders and has led Valpo to three league regular season and tournament titles, as well as three NCAA Tournament appearances. A two-time league Coach of the Year, Avery has coached 59 All-League recipients over her tenure at Valpo. She is Valpo’s all-time leader in both victories and winning percentage, and owns 453 career victories overall as a head coach.

Series History: Murray State - Valpo and Murray State will meet for the fourth time in program history Friday. Valpo is a perfect 3-0 against the Racers, including a pair of wins at the ARC in home tournaments - the last of which was a 3-1 victory on Sept. 19, 2014.

South Dakota - The lone prior meeting between the two schools came on Sept. 5, 2009 in Des Moines, Iowa - a 3-2 Valpo win. Valpo rallied from down two sets to none to earn that win.

IUPUI - This is the 36th meeting between the former Mid-Continent Conference rivals, with Valpo holding a 22-13 edge in the series. The Crusaders and Jaguars met in non-conference action in eight straight seasons after Valpo joined the Horizon League, but the two teams have not met since 2014 - a 3-2 Valpo win at the ARC.

Look to Kill: While this season’s 10 returnees accounted for 62% of Valpo’s service aces, 61% of its blocks and 60% of its digs last season, the one area where slack will have to be picked up is in terminating the ball. Valpo returns just 37% of its kills from last year’s team this season, as all four graduates from last year’s team tallied at least 160 kills last season. Among that group are two of the most prolific attackers in program history in Katherine Carlson and Allison Ketcham, who combined for 2,505 career kills and rank sixth and seventh all-time at Valpo, respectively, in the category. Of the returnees, junior middle Peyton McCarthy led the way last year with 230 kills, but no other returnee had more than 160 kills last season.

Setting Things Up: Junior setter Brittany Anderson has enjoyed a stellar first half of her career at Valpo, and was vital in the run to the NIVC quarterfinals last season. Anderson finished the 2018 campaign with 1,539 total assists to lead the nation in the category, a mark which ranks her second on Valpo’s single-season chart and eighth in the NCAA record book in the 25-point rally scoring era. A First Team All-MVC selection last year, Anderson has played every point of every match in her first two years at Valpo and enters her junior campaign with 2,774 total assists - already eighth-most in program history and on pace to break Valpo’s career record of 4,993 assists held by Stephanie Schuricht. A two-sport standout for the Brown and Gold, Anderson was also a stalwart on the softball diamond last year, starting all 47 games - 38 at first base, six at third base and three in right field.

Leading the Back Row: Junior libero Rylee Cookerly has not missed a set of action in her first two seasons, as she anchors the Valpo back row. Last season, Cookerly tallied 739 digs, third-most in a single season in program history and third-most in the NCAA last year. She ranked fourth in the MVC, averaging 5.06 digs/set. The AVCA Midwest Region Freshman of the Year as a rookie in 2017, through two seasons Cookerly already ranks 10th in program history in career digs (1,425) and is currently on pace to challenge Taylor Root’s program record of 2,752 digs.