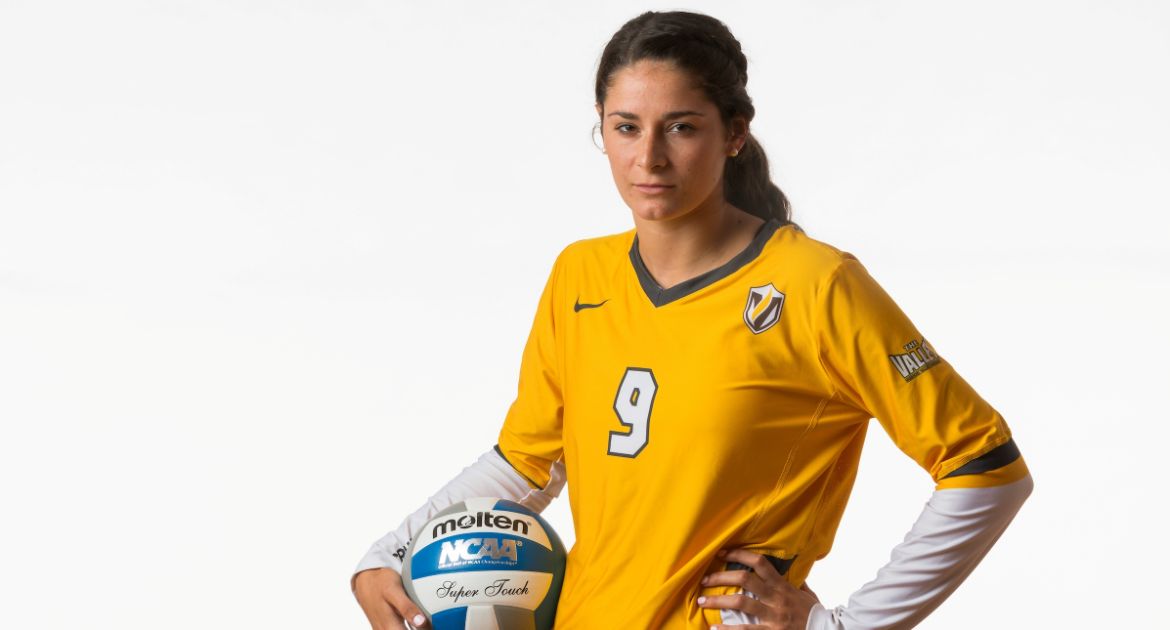 This Week in Valpo Volleyball: The Valpo volleyball team opens up Missouri Valley Conference action this weekend with its first two matches of the conference slate. Play begins Friday evening in Chicago with a matchup against travel partner Loyola before Valpo lifts the curtain on its home schedule Monday evening versus defending conference champion UNI. Monday's match will serve as the program's pediatric cancer awareness match.

Previously: Valpo posted a 1-2 record at its final early-season tournament of the year, defeating South Dakota State and falling to Kansas City and Milwaukee, and then fell in a rematch against Milwaukee to close non-conference play Tuesday evening.

Looking Ahead: Valpo faces its Indiana conference cohorts next weekend on the road, traveling to take on Evansville Friday night and Indiana State Saturday evening.

Following the Action: Every one of Valpo’s MVC matches will be broadcast live on The Valley on ESPN this season. Both of this week’s events will be carried on ESPN+. Live stats for both matches will also be available via ValpoAthletics.com.

Head Coach Carin Avery: In her 18th season as head coach at Valparaiso, Carin Avery has won 403 matches (403-187, .683) at the helm of the Crusaders and has led Valpo to three league regular season and tournament titles, as well as three NCAA Tournament appearances. A two-time league Coach of the Year, Avery has coached 59 All-League recipients over her tenure at Valpo. She is Valpo’s all-time leader in both victories and winning percentage, and owns a 458-211 (.685) record overall as a head coach.

Series History: Loyola - The Ramblers own a 27-19 advantage in the all-time series, but Valpo has dominated the recent matchups in the series. In the six years the two programs shared conference affiliation in the Horizon League, Valpo was 10-2 against the Ramblers, and since joining the MVC, Valpo has won all four matchups. Last season, Valpo earned a pair of epic wins, rallying from down two sets to win 3-2 both at home and at Rogers Park. With Friday’s meeting, Loyola will become Valpo’s second-most common opponent all-time, trailing only UIC.

UNI - The Panthers have won all 11 meetings in the all-time series, including all five since Valpo joined the MVC. Last year, UNI and Valpo met on three occasions, with the Panthers winning 3-1 in Valpo, 3-2 in Cedar Falls and 3-1 in Springfield, Mo. at the MVC Tournament.

Scouting the Opposition: Loyola - The Ramblers enter Friday’s match at 7-6 on the season, including wins over Northwestern and DePaul last weekend. Three Ramblers are averaging between 2.92 and 3.02 kills per set, with Taylor Venuto hitting at a team-best .354 clip and also recording a team-high 1.11 blocks per set.

UNI - The Panthers enter MVC play with a 6-8 record, but six of their eight defeats have come against ranked opposition. UNI will host Evansville and Indiana State to open conference action before appearing at the ARC. Karlie Taylor leads the Panther offense, averaging a conference-best 4.73 kills/set.

Anderson Picks Up All-Tournament Honor: Junior setter Brittany Anderson received another award and moved up another spot on Valpo’s all-time assists chart last week. Anderson represented Valpo on the All-Tournament Team at South Dakota State, averaging 10.1 assists/set as Valpo recorded two of its three best hitting percentages of the season last weekend. The honor was the fourth All-Tournament Team of Anderson’s career. Midway through Valpo’s second match of the weekend, Anderson surpassed Katie Bova for fifth place in program history in career assists. She now owns 3,130 assists, but has a long way to go to get to fourth position - Kim Bukowski, with 3,543 career assists.

Bulmahn Continues Strong Stretch: Junior Jaclyn Bulmahn has stepped up on the attack recently for Valpo. After entering the season with a career high of nine kills, Bulmahn reached double figures in the category just once over the season’s first two weeks. But over the last two weeks, Bulmahn has tallied 10 or more kills in five of seven matches, highlighted by a career-high 12 kills on .480 hitting against DePaul. An All-Tournament Team selection at DePaul, Bulmahn enters this week coming off of back-to-back 10-kill efforts versus Milwaukee.

McCarthy Leads the Offense: Junior Peyton McCarthy continues to lead Valpo offensively this season, entering MVC play with team bests in kills/set (2.98) and hitting percentage (.289). McCarthy ranks sixth in the conference in hitting percentage and ninth in kills. Last weekend at South Dakota State, McCarthy posted double figures in kills in all three matches, highlighted by a 17-kill effort versus Kansas City. The junior recorded kills on at least half her swings in all three contests and now has six such matches this year.