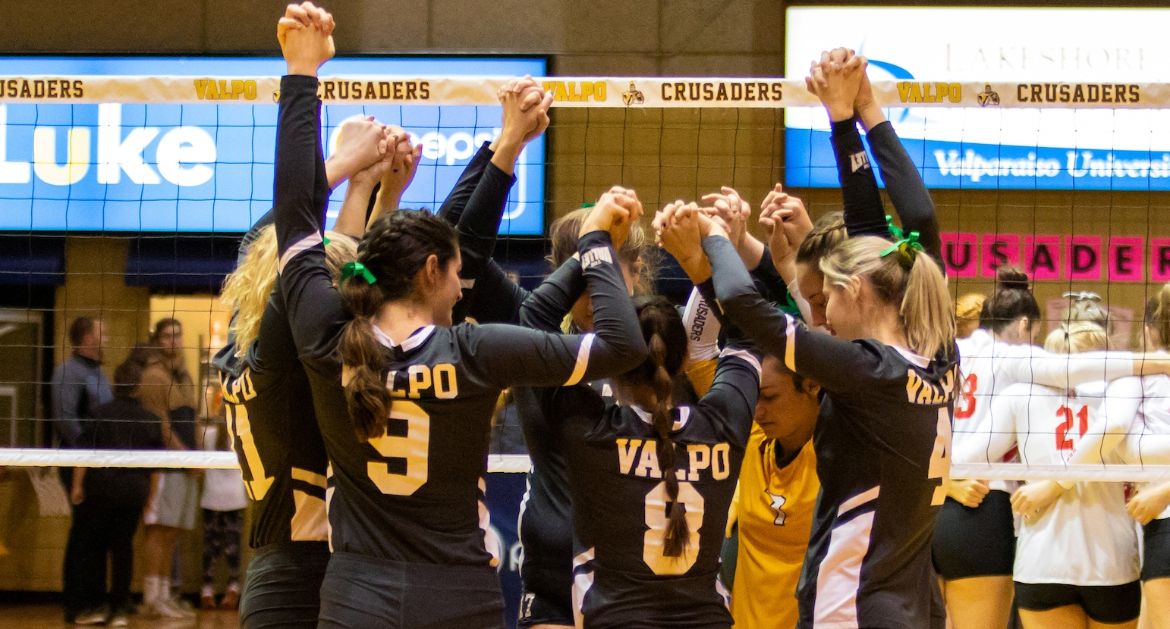 This Week in Valpo Volleyball: Valpo heads to the 2019 MVC Tournament this week in Cedar Falls, Iowa. The fifth seed in the six-team field, the Brown and Gold open the tournament Thanksgiving evening against fourth-seeded Bradley and will have to earn three victories to claim the tournament title.

Previously: Down two sets to none last Friday night at Drake and with a tournament berth already secured, it would have been easy for Valpo to pack it in, but instead the Brown and Gold battled back, eventually earning a 3-2 win over the Bulldogs for their eighth Valley win of the season. Valpo concluded the regular season Saturday at MVC champion UNI, falling in straight sets.

Looking Ahead: The winner of the MVC Tournament earns the MVC’s automatic bid to the NCAA Tournament.

Following the Action: Every match of the 2019 MVC Tournament will be broadcast live on ESPN+. Live stats for all of Valpo’s matches will also be available via ValpoAthletics.com.

Head Coach Carin Avery: In her 18th season as head coach at Valparaiso, Carin Avery has won 411 matches (411-197, .676) at the helm of the Crusaders and has led Valpo to three league regular season and tournament titles, as well as three NCAA Tournament appearances. A two-time league Coach of the Year, Avery has coached 59 All-League recipients over her tenure at Valpo. She is Valpo’s all-time leader in both victories and winning percentage, and owns a 466-221 (.678) record overall as a head coach.

Valpo In The Postseason: In 14 of head coach Carin Avery’s 17 seasons, Valpo has advanced to at least its conference tournament semifinal match. Valpo is 1-2 in its first two years as an MVC member in the conference tournament and advanced to the semifinals last year with a win over Missouri State before falling to UNI. . In 10 years in the Horizon League, the Crusaders were 11-10 in the HL Tournament and advanced to the semifinals nine times - including four berths in the title match. Prior to that, the Crusaders went 7-2 in their final five years in the Mid-Continent Conference in the Mid-Con Tournament, winning three tournament titles.

Outperforming the Preseason Poll: For the third time in as many seasons as an MVC member, Valpo outperformed its preseason pick in the coaches poll. This year, after being projected to place seventh in the preseason, the Brown and Gold finished in fifth place. Last year, Valpo closed the regular season in fourth position after being picked fifth in the preseason. Valpo was picked seventh in its first season as a conference member in 2017 before finishing in a tie for fifth place.

What’s Back and What’s New: Valpo returned 10 letterwinners from last year’s 27-win squad, but replaced four starters from that team this season. Coach Avery welcomed a large contingent of newcomers as well, as nine new faces dotted the Valpo roster this year - eight true freshmen and one senior transfer. In fact, the 19-player roster is not only the largest in Avery’s tenure, it is the largest in program history. It is also the largest roster among MVC teams this season.

Digging Deep: Each of the last two years has seen Valpo lead the nation in a digs category. Valpo led Division I in 2017 in digs/set nearly all season long, ending the year averaging 20.03 digs/set to lead the nation. Valpo’s 2017 campaign was only the second since the move to 25-point rally scoring in 2008 where a team averaged at least 20 digs/set. Then last year, Valpo posted 2,613 digs to lead the country in total digs, setting not only a Valpo single-season record, but a Division I record in the 25-point rally scoring era. The Crusaders have a long tradition of strong defensive play, as they have ranked among the top-20 nationally in digs/set in each of the last nine seasons - including a sixth-place placement in 2015 and a fourth-place finish in 2010 in addition to 2017’s statistical championship. This year’s team currently ranks 27h nationally with 17.20 digs/set, with junior libero Rylee Cookerly ranking 20th individually.

Turnabout is Fair Play: The last week of the regular season featured a revenge result of sorts for Valpo, as the Crusaders rallied from down two sets at Drake to come from behind for a 3-2 victory. That result mirrored the result from 25 days earlier, when Valpo led 2-0 at home over the Bulldogs before Drake rallied for a 3-2 win. The win for Valpo in Des Moines is the third time in the last two MVC seasons that Valpo had trailed 2-0 and won, as the Crusaders delivered Loyola a pair of five-set losses during the 2018 season in that fashion.

Avery Reaches 400: Valpo head coach Carin Avery hit another milestone in her distinguished career in the first week of regular season play, picking up her 400th win at the helm of the Valpo program as Valpo closed its opening weekend with a win against host IUPUI. In her 18th season as head coach at Valpo, Avery is far and away Valpo’s all-time leader in victories, as second place has just 92 wins. In fact, Avery has more wins in her time at Valpo than all of the program’s other head coaches combined (301).

Cookerly Keeps on Digging: Junior libero Rylee Cookerly has played every match at the position since arriving on campus in 2017, and has been as strong as ever this season. Cookerly has tallied 616 digs this year, already 10th-most in a single season in program history, and ranks 20th nationally with 5.22 digs/set. She bumped her average to 5.58 digs/set within MVC play and helped limit Valpo’s conference opponents to .181 hitting. Cookerly has been in double figures in digs in all 32 matches, tallied 20 or more digs 14 times and surpassed 30 digs twice.

Lofty Career Numbers: Cookerly has racked up a ton of digs through her first three years and is among the national active leaders in the category. Entering the MVC Tournament, Cookerly has totaled 2,041 career digs, 12th-most among active D-I players. She is the only junior among the top-25 in the category and owns 265 more digs than any other junior in the nation. Cookerly is just the fourth player in Valpo history to reach the 2,000-dig mark, and will end her junior year with more digs through three seasons than any player in program history. She is also just the 3rd player in MVC history with 600+ digs in each of her first three seasons (Ellie Blankenship, UNI; Courtney Pence, Illinois State).

McCarthy Steps Up: Valpo entered this season having graduated nearly 3,500 career kills from last year’s team and looking for somebody to fill the void as the team’s top attacker. Junior Peyton McCarthy has taken on that onus and been strong this year, entering the MVC Tournament averaging a team-high 2.92 kills/set on .275 hitting, the latter mark good for fourth in the conference. She has been in double figures in kills 20 times this year, while defensively, she has registered at least five blocks on nine occasions - eight of which have come in MVC play. McCarthy leads Valpo in both total kills (345) and blocks (103), and is on pace to be the first player to lead the Crusaders in both categories since 2012.

A Historic Effort: The highlight of McCarthy’s season was one of the most prolific matches in program history in Valpo’s come-from-behind win at Southern Illinois Nov. 8. McCarthy posted a career-high and Valpo season-best 25 kills on .512 hitting, smashing her previous career best of 18 kills. It was the best hitting percentage in program history by a player with 25 or more kills in a match, while her 25 kills are second-most by a Valpo player in a five-set match in the 25-point era and the .512 hitting percentage ranks third in a five-set match in the 25-point era.

Setting Things Up: Junior Brittany Anderson has been Valpo’s primary setter for a third straight year this season and ranks fourth in the MVC with 8.43 assists/set on the year. Anderson enters the MVC Tournament with 995 total assists this year, giving her 3,769 career assists – 19th-most among active Division I players and third-most among juniors. She ranks fourth in program history in career assists as well, and also became just the 22nd player all-time at Valpo to surpass the 1,000 career dig milestone earlier this season.

Two-Sport Star: Even more impressively, Anderson is a two-sport athlete at Valpo. Once volleyball season is over, Anderson transitions to softball, where she started all 47 games a season ago - 38 at first base, six at third base and three in right field. She ranked seond on the team last year with 23 runs scored and delivered 14 RBIs as well. In the field, she committed just two errors in 208 chances, and through two seasons, ranks second in program history in career fielding percentage (.993).

Academic Honors: Cookerly and Anderson are not just impressive on the volleyball court, but both boast impressive resumes in the classroom as well. Cookerly owns a 3.948 cumulative grade point average as a nursing major and earned MVC Scholar-Athlete First Team and First Team Academic All-District honors this season. Anderson was an MVC Scholar-Athlete Honorable Mention selection and carries a 3.691 cumulative GPA as a sports management major.