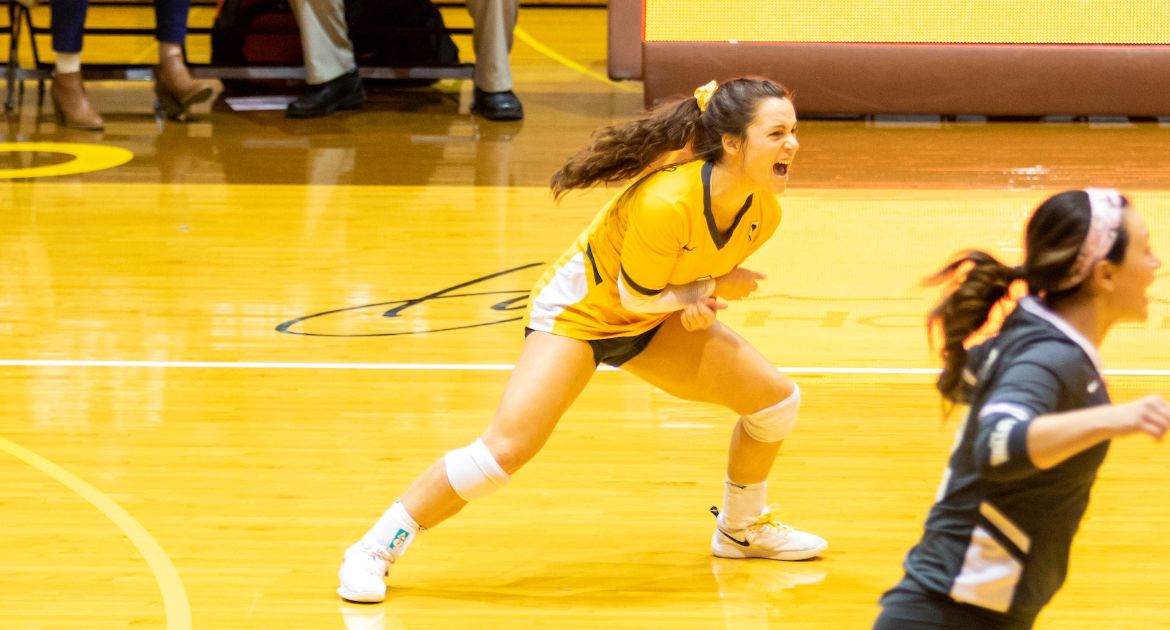 Over the last three years, there’s been one constant around the ARC during the fall — Rylee Cookerly diving around, patrolling the back row for the Valpo volleyball program and racking up massive dig totals as she attempts to cement herself as one of the best liberos in Valpo and Missouri Valley Conference history.

But this year has been anything but normal, and with volleyball competition having been postponed until the spring semester, Cookerly’s passion for competing has been limited to open gyms with her teammates. But the lack of competition hasn’t prevented Cookerly from continuing to build bonds with her teammates while also focusing on her nursing coursework as she nears graduation.

While the volleyball program was responsible for her initial attraction to Valparaiso University, it didn’t take long for Cookerly to recognize that Valpo would be a great fit to attend for nursing — an area she decided to pursue as a senior in high school.

“My dad and I came up to Valpo to watch a match — I remember Taylor Graboski was a junior that year, and she was just so energetic,” Cookerly said. “It was the most fun I’d ever had watching a volleyball match, and I remember thinking ‘I want to be a part of that program.’ Then when I came on my visit, I felt at home right away and everything fell into place. When I visited, I had a meeting with the Dean of the [College of Nursing and Health Professions], Karen Allen. It was awesome hearing her tell me about all of the different programs they offer, and I could tell right away it was a great school to come to for nursing.”

Cookerly immediately had big shoes to fill within the volleyball program when she stepped on campus in the fall of 2017, as the freshman libero was following the path blazed by a trio of four-year liberos who preceded her. But it took Cookerly exactly one match to cement herself as worthy of being part of that lineage, as in her debut, she racked up 43 digs against Notre Dame, breaking Valpo’s single-match record in the category by three digs.

“Going into that match, honestly, I felt like I wasn’t having a great week of practice,” Cookerly said. “I was very nervous, and my dad’s family is from South Bend, so I felt like there was a lot riding on it. Before the match, going through all our pregame rituals for the first time helped me settle in and realize this is just going to be very fun. During the match, I was having the time of my life and completely forgot about everything that was making me nervous leading in.”

That match kicked off a three-year journey during which Cookerly started every single one of Valpo’s 105 matches at libero. She was named the AVCA Midwest Region Freshman of the Year in 2017 — the first-such honoree in program history and the only libero to earn the regional recognition that year — and was tabbed the MVC Libero of the Year last year. The biggest accomplishment in Cookerly’s eyes, however? Helping to lead Valpo to its first postseason victories in 2018.

“That was an incredible feeling,” Cookerly said. “Going into the first weekend where we were going to play Miami (Ohio) and Ball State, I felt like we walked into that huge gym as underdogs and felt like no one believed we were going to come out on top. That’s probably my favorite moment that I’ve been a part of here, that we were able to come in and beat those two schools in the postseason.”

While the team accomplishment was the most important, Cookerly ended her junior year with a number of individual goals well within reach. With 2,092 digs through three seasons, she entered this year with 273 more digs than any other active Division I player. Cookerly was not only on pace to surpass Morganne Longoria and Brittany Malicoat on Valpo’s career digs chart, she was in position to take aim at Taylor Root’s school record, potentially move atop the MVC career chart and finish out her career among the best in NCAA history in the category.

“In the recruiting process, [Coach Avery] made it very apparent she really values the libero position in a way that not many programs do,” Cookerly said. “It meant a lot to me that I was valued and seen. The legacy of liberos here is really cool — I know Brittany Malicoat, Taylor Root and Morganne Longoria set a bunch of records, and everyone keeps improving on the records, and I hope that continues. To come to a mid-major school and be given the opportunity to show what I can do, it’s awesome to be part of that legacy and to put the libero position on the map.”

Then, the COVID-19 pandemic struck, and in August, the MVC made the announcement that the fall sports conference schedules, including volleyball, would be postponed.

The announcement, while expected, still stung, but it presented a chance for the program to grow closer away from competition.

“We decided over the summer that we were going to try to stay together — we had Zoom calls, we did a book club, we held each other accountable by sharing our workouts,” Cookerly said. “Now that we’re back on campus, we’re trying to continue to do a lot together off the court. Last spring, we realized how much we had to work on our off-the-court relationships, because those relationships translate and help us on the court.”

An academic possibility also opened up for Cookerly that otherwise wouldn’t have been an option.

“This summer, I was able to do an internship that I wouldn’t have been able to do if we had our normal volleyball summer schedule,” Cookerly said. “I did an internship at the Cleveland Clinic; it was a five-week internship, and I learned so much. I was really grateful that, although we didn’t have volleyball, it allowed me the opportunity to take part in that internship.”

With that internship behind her, Cookerly is still trying to decide what nursing field she would like to go into. But she does have a preference for the type of work she wants to do in the future.

The good news for Cookerly is that the postponement of this fall’s competition also opened up another avenue for her as graduation approaches. Currently carrying a 3.97 GPA, she is on pace to graduate in May with her bachelor’s in nursing. Cookerly then plans to utilize the blanket waiver year afforded to all fall student-athletes by the NCAA to come back and play volleyball again next fall, while applying to enter the Doctor of Nursing Practice program in Valpo’s College of Nursing and Health Professions in hopes of starting that program in the fall as well.

For now, Cookerly is fully pouring her passion into completing her bachelor’s degree and helping bring Valpo volleyball closer as a program, both on and off the court. But opponents better be prepared. Once the all-clear for the return to competition is issued, Cookerly once again will be diving all over the place, patrolling the back line and racking up digs.