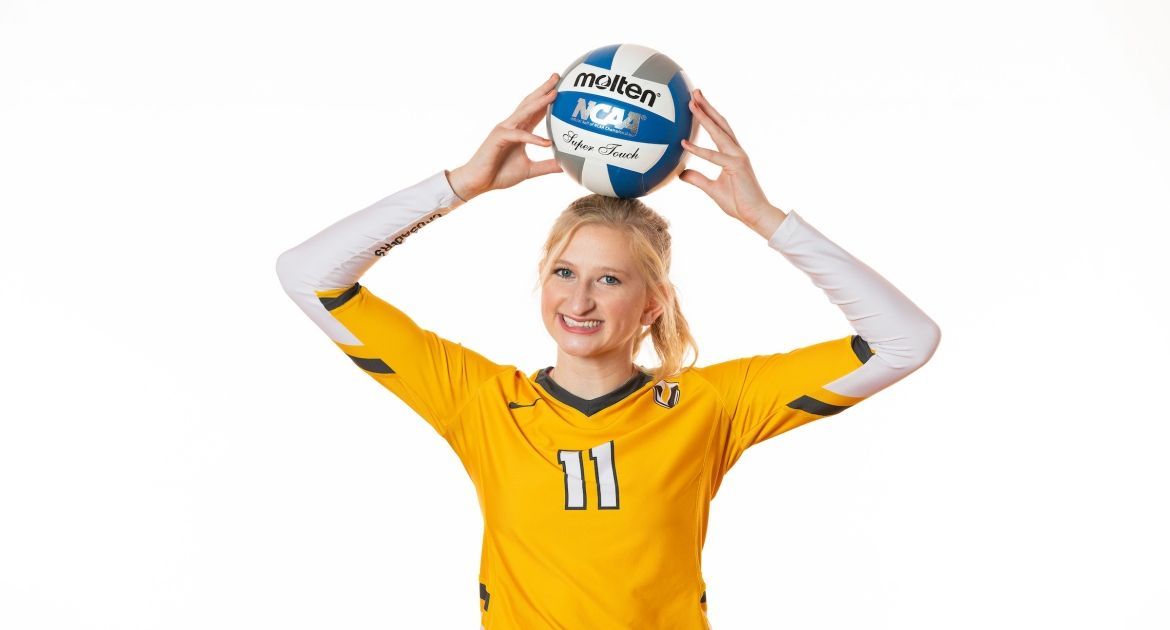 This Week in Valpo Volleyball: With the opening week of play under its belt, Valpo makes the longest conference road trip of the season this weekend, traveling down to Missouri State for its first back-to-back two-game series of the season. The Brown and Gold will take on the Bears on Sunday and Monday afternoon.

Previously: Valpo opened the regular season with a 2-1 record, splitting the two-game MVC series with Loyola as each team won on its home court, with a sweep of Butler in nonconference action in between. Rylee Cookerly and Victoria Bulmahn were named the MVC’s Defensive Player of the Week and Freshman of the Week, respectively, for their play in the two victories.

Looking Ahead: Valpo returns home to host Southern Illinois Feb. 14-15, its last home matches before a five-match stretch on the road.

Following the Action: Both of these weekend’s matches will be broadcast live on ESPN3. Links for the live video, as well as live stats, will be available via ValpoAthletics.com.

Head Coach Carin Avery: In her 19th season as head coach at Valparaiso, Carin Avery has won 414 matches (414-199, .675) at the helm of the Brown and Gold and has led Valpo to three league regular season and tournament titles, as well as three NCAA Tournament appearances. A two-time league Coach of the Year, Avery has coached 61 All-League recipients over her tenure at Valpo. She is Valpo’s all-time leader in both victories and winning percentage, and owns a 469-223 (.678) record overall as a head coach.

Series History: Valpo owns a 3-6 record all-time against Missouri State, but all three of Valpo’s wins have come in the last four meetings between the two squads. Last season saw the two programs split the matchups, as Valpo won in a three-set sweep at the ARC while the Bears took a five-set match in Springfield. Peyton McCarthy paced the Brown and Gold with 11 kills on .273 hititng in the home win, while Rylee Cookerly racked up 6.50 digs/set over the pair of matches.

Digging Deep: Valpo continued its long tradition of strong back row play in 2019, finishing the year ranked ninth nationally in total digs and 26th in digs/set. The Brown and Gold have ranked among the top-30 nationally in digs/set in each of the last 10 seasons, including leading the nation with 20.03 digs/set in 2017 to go along with a fourth-place rank in 2010 and a sixth-place finish in 2015. 2018 saw Valpo lead the nation in a digs category as well, as it posted 2,613 total digs - a mark which not only ranked first nationally for total digs, but also set a program single-season record and a Division I record in the 25-point era.

Doubling Up on Awards: It was only fitting that, after winning a pair of matches last week, Valpo ended up winning a pair of MVC weekly awards. Senior libero Rylee Cookerly was named MVC Defensive Player of the Week - her third career weekly honor from the conference - as she led all players in digs in both wins (17 versus Butler, 23 versus Loyola). Cookerly - the reigning MVC Libero of the Year and by far the nation’s active career digs leader - averaged 5.71 digs/set and also received 33 serves without an error over the two matches, has now scored double figures in digs in 58 consecutive contests and has posted 20+ digs 50 times in her Valpo career.

Meanwhile, freshman setter Victoria Bulmahn was named the MVC Freshman of the Week. After missing the season opener, Bulmahn stepped right in on Friday and dished out 30 assists in the sweep of Butler. Then, in her first career MVC match on Monday versus Loyola, Bulmahn tallied 50 assists over the four-set win and added 13 digs as well for her first career double-double. Bulmahn’s setting helped the offense to a .242 attack clip in the win over the Ramblers, as three different Valpo players reached double figures in kills, all hitting better than .300. For the week, Bulmahn averaged 11.43 assists/set and 2.86 digs/set.

Playing Out of System: The win over Loyola this past Monday was impressive, given that Valpo was swept twice by the Ramblers last season, but the five-set loss to open the season in Chicago to the Ramblers was just as impressive. Valpo played its season-opening match completely out of system, as it was without the services of a setter - Bulmahn missed the match, while Brittany Anderson is playing softball this spring. Despite that, Valpo was still able to push a Loyola squad picked four spots ahead of it in the preseason poll to the brink.

A Sister Act: While the vast majority of the team is back from last season’s squad which closed the year in the MVC Tournament semifinals, this year’s team does have a pair of freshmen, one of whom has a familiar last name. Victoria Bulmahn starts her collegiate career this year alongside her sister, senior outside hitter Jaclyn Bulmahn. They are the first pair of sisters to suit up simultaneously for the volleyball program since Rae Ann and Renee Kwiatkowski in 1986 and 1987.