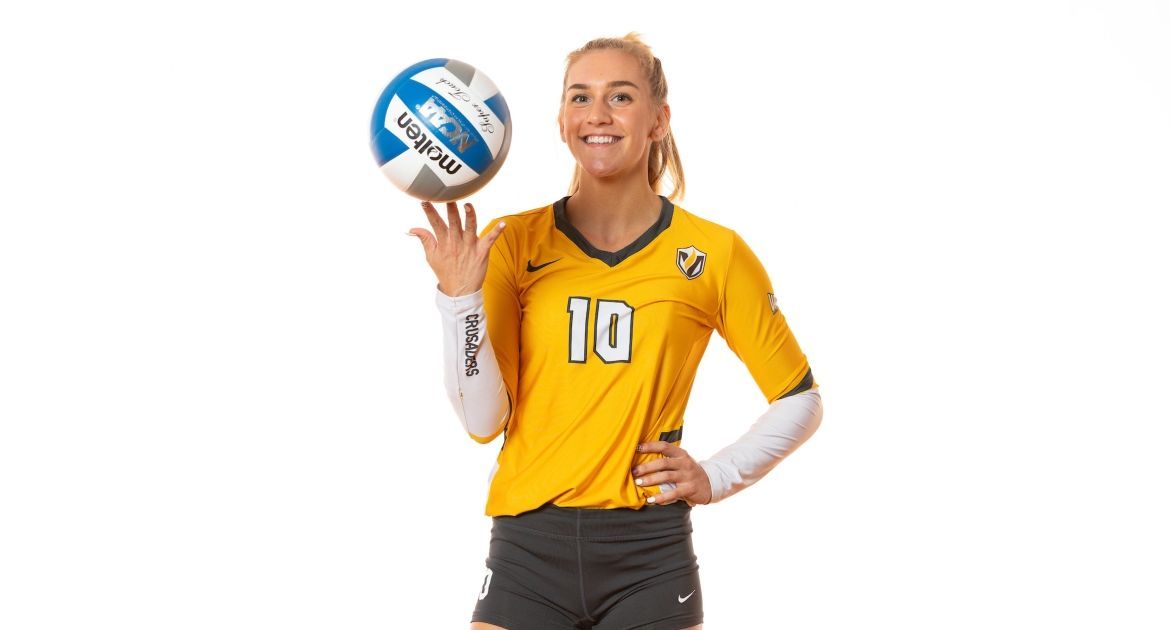 This Week in Valpo Volleyball: Valpo returns to the road this week, where it will play each of its next five matches. The Brown and Gold step out of MVC play for the second and final time this year on Thursday with the short trip over to nationally-ranked Notre Dame, and then Valpo heads to Normal, Ill. for its two-match series at Illinois State.

Previously: Valpo bounced back from a tight five-set loss on Sunday to Southern Illinois at the ARC to earn a four-set victory on Monday to emerge with a series split with the Salukis. Jaclyn Bulmahn hit .419 with 4.11 kills/set over the two matches, including a career-best 23 kills on .500 hitting Sunday, while Rylee Cookerly averaged 6.89 digs/set over the two matches and tallied 30 or more digs in both contests.

Looking Ahead: Valpo concludes its five-match road stretch Feb. 28-March 1 with a pair of matches at Drake.

Head Coach Carin Avery: In her 19th season as head coach at Valparaiso, Carin Avery has won 415 matches (415-202, .673) at the helm of the Brown and Gold and has led Valpo to three league regular season and tournament titles, as well as three NCAA Tournament appearances. A two-time league Coach of the Year, Avery has coached 61 All-League recipients over her tenure at Valpo. She is Valpo’s all-time leader in both victories and winning percentage, and owns a 470-226 (.675) record overall as a head coach.

Series History: Notre Dame - The Fighting Irish own a 23-5 advantage in the all-time series over Valpo. In head coach Carin Avery’s tenure, Valpo and Notre Dame have met 10 times previously, with ND owning an 8-2 record in those matchups. Valpo claimed wins at the Joyce Center in 2004 and 2008. This marks the second straight season the programs have faced each other in non-conference action, as the Fighting Irish earned a three-set sweep at Notre Dame in September 2019.

Illinois State - Valpo is just 2-9 all-time against the Redbirds, and Illinois State has won all seven meetings in the series over the last three seasons since Valpo joined the MVC. Last season, ISU defeated Valpo in Normal in four sets and then held off a match point at the ARC to rally for a five-set win. Peyton McCarthy hit .314 with better than three kills per set over the two matches, while Haley Hart hit .550 with 12 kills and eight blocks in the match in Valpo.

Scouting the Opposition: Notre Dame - The Fighting Irish are playing their first match of the spring after posting a 6-1 record in the fall. Notre Dame is led offensively by Charley Niego, who is averaging 4.12 kills/set so far this year. Lindsey Miller is averaging a team-best 1.00 blocks/set and hitting .444 on the offensive side of the ball.

Illinois State - The Redbirds are 6-4 overall and 4-2 in MVC play after picking up a pair of victories over Drake last weekend. Kaylee Martin leads the ISU attack with 4.12 kills/set, while Nicole Lund paces a potent Redbird block with 1.32 blocks/set.

Digging Deep: Valpo continued its long tradition of strong back row play in 2019, finishing the year ranked ninth nationally in total digs and 26th in digs/set. The Brown and Gold have ranked among the top-30 nationally in digs/set in each of the last 10 seasons, including leading the nation with 20.03 digs/set in 2017 to go along with a fourth-place rank in 2010 and a sixth-place finish in 2015. 2018 saw Valpo lead the nation in a digs category as well, as it posted 2,613 total digs - a mark which not only ranked first nationally for total digs, but also set a program single-season record and a Division I record in the 25-point era. Through its first seven matches, Valpo is 12th nationally with 19.33 digs/set.

Facing Ranked Opposition: When it takes to the court against #13 Notre Dame on Thursday afternoon, Valpo will be searching for its first-ever win over a ranked opponent in program history. Valpo’s last outing against a top-25 foe came on Sept. 4, 2018, a 3-0 loss at #20 Michigan. Since joining the MVC, Valpo has had three conference matches against top-25 opposition, all of which came in the 2017 campaign - two against UNI and one versus Missouri State.

A Stellar Stretch: Senior outside Jaclyn Bulmahn continued her torrid stretch of play in Valpo’s pair of matches against Southern Illinois last week. On Sunday, the senior smashed her career highs with 23 kills on .500 hitting - the hitting percentage tied for fifth-best in Valpo history in a 5-set match during the 25-point era. Then, in Monday’s win, Bulmahn tied for match-high honors with 14 kills on .312 hitting. For the weekend, Bulmahn hit .419 with 4.11 kills/set. She has led Valpo in kills in four straight matches, hitting above .300 in all four contests - prior to this stretch, Bulmahn had a career high of 15 kills, but has averaged 17.75 kills/match over the last four. She currently ranks second in the Valley in hitting percentage (.317) with the most attacks of any of the top-10 in the category.

Setting Things Up: Freshman setter Victoria Bulmahn continued the strong start to her collegiate career last weekend, tallying a pair of double-doubles as Valpo split its series with Southern Illinois. She kicked off the series with 62 assists and 16 digs in a tight 5-set loss to the Salukis - the 62 assists were the most in a single match by a Valpo setter since October 2014, and were fourth-most by a Valpo player in a five-set match in the 25-point era. On Monday, Bulmahn notched 41 assists and 17 digs as Valpo earned a 4-set win. For the week, Bulmahn averaged 11.44 assists and 3.67 digs per set. The MVC’s Freshman of the Week Feb. 2, Bulmahn currently ranks 11th nationally with 11.64 assists/set - the highest-ranking freshman and one of just two rookies in the top-25 - and leads the MVC by nearly two full assists per set.

Marching Up the Charts: Senior libero Rylee Cookerly hit the 30-dig mark in back-to-back matches for the first time in her career in the Brown and Gold as she averaged 6.89 digs per set in the two-match series against Southern Illinois last weekend. On Sunday, Cookerly posted 30 digs, five assists and an ace in Valpo’s tight 5-set loss to the Salukis and followed on Monday with 32 digs, seven assists and two aces in Valpo’s 4-set win. The 32 digs - 14 of which were converted immediately into kills - are the third-most digs by a Valpo player in a four-set match in the 25-point era. Cookerly - who ranks 13th nationally this year with 5.80 digs/set and leads all active players in career digs by 410 digs - jumped two spots on the MVC career digs chart over the course of the two matches, moving into sixth position in conference history in the category, and her 2,266 career digs moved her into third in Valpo history in the category as well. She is within striking distance of second position on Valpo’s career chart and fifth in MVC history with three matches this week.

Hart Continues Production on Both Sides: Junior middle Haley Hart has been a blocking machine throughout her career - she ranked third in the MVC last year in blocks/set (1.03) and tallied 0.80 blocks/set in half-time action as a freshman. That has continued this year, as she currently owns a team-best 1.15 blocks/set to rank fourth in the MVC, but she has added expanded offensive production to her game as well. In the five matches her and Victoria Bulmahn have played together, Hart has averaged 2.86 kills/set on .333 hitting out of the middle, reaching double figures in kills in all five contests after hitting double figures just seven times in her first two seasons. Hart had her best offensive performance of the season last time out in the Monday win over SIU, posting 14 kills - just one off her career best - on .519 hitting. She also led the way with six blocks in the win over the Salukis and even stepped back to the service line for the first time since serving three times as a freshman, delivering a service ace on her first attempt.

More Career Highs: Sunday’s tight 5-set loss to Southern Illinois featured two other career bests for Valpo players. Junior Jillie Grant smashed her previous career high of 17 kills as she registered 22 terminations against the Salukis on Sunday while hitting .271. She added 14 digs as well for a double-double. Meanwhile, sophomore Bella Ravotto notched her second consecutive career-best effort in the digs category in that match as she tallied 23 digs. Heading into the Monday finale at Missouri State, Ravotto owned a career high of 17 digs, but broke that in back-to-back matches with first 20 and then 23 digs. Ravotto has emerged as a strong back-row outside this year, reaching double figures in digs in all seven matches so far and averaging 3.37 digs/set.