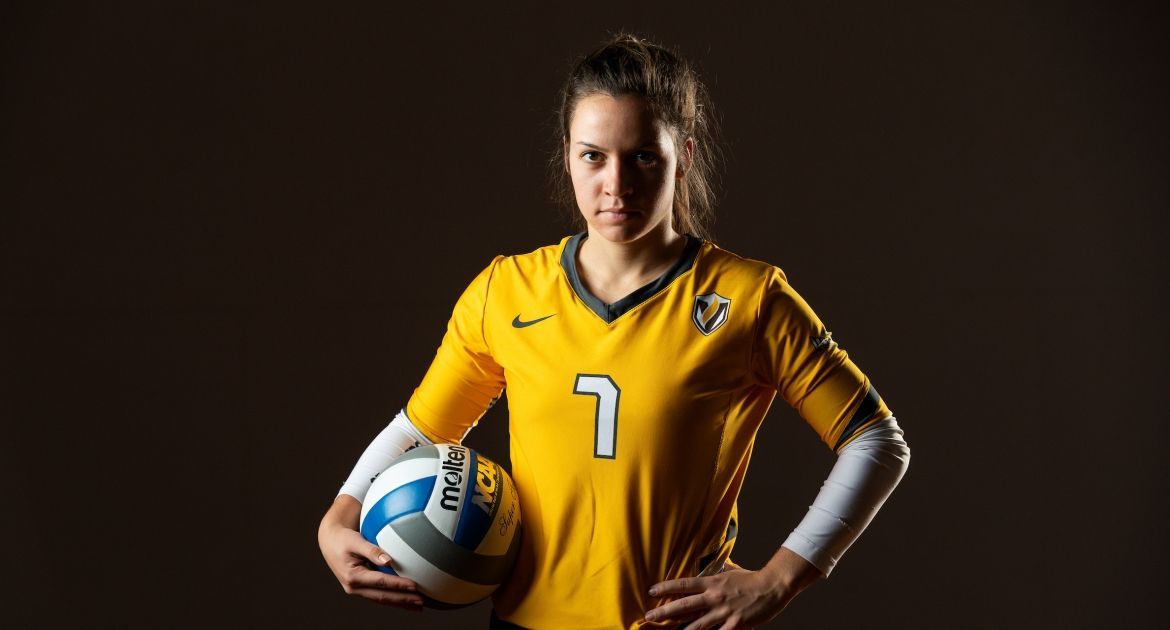 This Week in Valpo Volleyball: Valpo opens up the second half of its spring 2021 schedule this weekend as it concludes a five-match road trip with contests Sunday and Monday at Drake.

Previously: Valpo gave #13 Notre Dame a run for its money in the Brown and Gold’s second and final non-conference matchup of the regular season before falling in five sets to the Irish last Thursday. Valpo then headed down to Illinois State and split a pair of matches with the Redbirds, falling 3-1 last Sunday before rallying for a 3-2 win on Monday. Rylee Cookerly earned her second Defensive Player of the Week honor from the MVC following strong performances in all three matches.

Looking Ahead: Valpo returns home to the ARC for the first of three consecutive weekends at home next Sunday and Monday, March 7 and 8, as the Brown and Gold host Bradley.

Following the Action: Both matches this weekend will be broadcast live on ESPN+. Links for the live video, as well as live stats, will be available via ValpoAthletics.com.

Head Coach Carin Avery: In her 19th season as head coach at Valparaiso, Carin Avery has won 416 matches (416-204, .671) at the helm of the Brown and Gold and has led Valpo to three league regular season and tournament titles, as well as three NCAA Tournament appearances. A two-time league Coach of the Year, Avery has coached 61 All-League recipients over her tenure at Valpo. She is Valpo’s all-time leader in both victories and winning percentage, and owns a 471-228 (.674) record overall as a head coach.

Series History: Valpo holds a 8-4 advantage in the all-time series over the Bulldogs, and under Coach Avery, the Brown and Gold are 7-3 against Drake. Since joining the MVC, Valpo enjoys a 6-2 edge in the series. Last season saw a pair of epic matches, as each team earned a 3-2 road victory by rallying from down two sets. Peyton McCarthy led Valpo in the two bouts with the Bulldogs, combining for 36 kills and hitting .365, while Rylee Cookerly registered 62 digs over the two matches.

Scouting the Opposition: Drake enters this weekend’s matches at 6-3 overall and 4-2 within MVC play and sits in second place in the Valley standings. The Bulldogs dropped two matches at Illinois State Feb. 14-15 in their last competition - their scheduled matches last weekend at Missouri State were postponed. Haley Bush and Emily Plock both average better than 3.5 kills/set, while Gillian Gergen leads the defense at the net with 1.09 blocks/set.
Valpo Picked Seventh in Preseason Poll: Entering its fourth season of Missouri Valley Conference play, Valpo has been selected to finish in seventh place in the conference in the spring of 2021, acording to preseason polling of the conference’s head coaches. Valpo tallied 39 points in the polling, while UNI and Illinois State earned the top two spots, with the Panthers edging the Redbirds both in first-place votes (6-4) and total points (96-93). Valpo has outperformed its preseason poll rank in each of its first three seasons in the MVC.

Digging Deep: Valpo continued its long tradition of strong back row play in 2019, finishing the year ranked ninth nationally in total digs and 26th in digs/set. The Brown and Gold have ranked among the top-30 nationally in digs/set in each of the last 10 seasons, including leading the nation with 20.03 digs/set in 2017 to go along with a fourth-place rank in 2010 and a sixth-place finish in 2015. 2018 saw Valpo lead the nation in a digs category as well, as it posted 2,613 total digs - a mark which not only ranked first nationally for total digs, but also set a program single-season record and a Division I record in the 25-point era. Through its first 10 matches, Valpo is ninth nationally with 19.48 digs/set.

A Near Miss: Valpo took aim at its first win over a nationally-ranked opponent in program history last week at #13 Notre Dame. The Brown and Gold led the Fighting Irish two sets to one and had a match point chance for a couple minutes in set four prior to a replay reversal before their eventual five-set loss. It marked the third time in program history Valpo has taken a nationally-ranked foe to five sets.

Dominant Close to the Match: Never before in the rally scoring era had Valpo delivered as crushing a fifth-set victory as it did in last Monday’s win over Illinois State. Valpo finished the match with a 15-2 win in set five to earn its first win over the Redbirds since joining the MVC. The defense got the job done in the final frame, as ISU hit -.438 and committed eight attack errors - four of which were Valpo blocks. Valpo previously owned two fifth-set wins in the rally scoring era by 15-3 finals.

Turning Things Around: Not only was Monday’s victory over Illinois State the first for Valpo against the Redbirds since joining the MVC, it also was a turnaround from a couple of the team’s recent trends. It was the team’s first victory in a five-set match of the season, as it had lost four straight five-set affairs to open the campaign. In addition, Valpo won the first set in the finale with the Redbirds, breaking a string of six consecutive matches which saw the Brown and Gold drop the first set before rebounding to win the second frame.

Another Honor for Cookerly: The reigning MVC Libero of the Year, Rylee Cookerly was named the MVC Defensive Player of the Week earlier this week for the second time this season. Cookerly opened the week with a 40-dig effort in Valpo’s upset bid at #13 Notre Dame, tied for the most in a five-set match, second-most in any length match in program history, and her second career effort of 40+ digs. While it didn’t go down as one of her 40 digs, Cookerly’s one-handed dive backwards to keep a rally alive that Valpo eventually won was featured on ESPN’s SportsCenter at number eight on its nightly Top Ten countdown. Cookerly followed with 23 digs, five assists and two aces Sunday at Illinois State before closing the week with 32 digs and six assists in Valpo’s Monday win over the Redbirds — the first for the program since joining the Valley. She averaged 6.79 digs and 1.36 assists per set for the week and has led all players in digs in each of Valpo’s last nine matches.

An Especially Stellar Stretch: Every time it seems like there’s not much room for Cookerly to improve her game, she manages to raise it another level, and that is what she’s done recently. After coming into the season having reached 30+ digs in a match just five times over her first three years, Cookerly has now hit the 30-dig mark four times in Valpo’s last five matches alone. Her recent play has pushed her digs/set average to 6.15 - a mark which easily outpaces her career best, leads the MVC and currently ranks seventh nationally.

Moving Up the Charts: Cookerly has soared up multiple career digs charts with her play in the first half of the season. She currently sits second in Valpo history and fifth in MVC history with 2,361 career digs, having jumped two spots on the Valpo chart and three spots on the MVC chart in just the last two weeks alone. She enters the Drake series just 62 digs shy of fourth on the MVC chart, and is also just 69 digs away from cracking the NCAA’s top-25 chart for Division I.

Pounding the Redbirds: Senior middle Peyton McCarthy showcased the form that made her a First Team All-MVC honoree last year in Valpo’s pair of matches last week at Illinois State. In the Sunday opener with the Redbirds, McCarthy notched a team-best 11 kills on .400 hitting. Then, in Monday’s five-set win, she led all players with 17 kills while hitting at a .333 clip and also paced Valpo with five blocks.

Setting Things Up: Freshman setter Victoria Bulmahn continued the strong start to her collegiate career last week with three more double-doubles, giving her eight straight double-doubles dating back to Feb. 1. She posted 50 assists and a season-high 19 digs at #13 Notre Dame, and then averaged 7.67 assists and 3.33 digs per set in the split at Illinois State. Bulmahn’s serving was critical to Valpo’s Monday win over the Redbirds, as she went on big service runs at the start of the fourth and fifth sets. The MVC’s Freshman of the Week Feb. 2, Bulmahn currently leads the MVC and ranks 38th nationally with 10.51 assists/set.

Hart Continues Production on Both Sides: Junior middle Haley Hart has been a blocking machine throughout her career - she ranked third in the MVC last year in blocks/set (1.03) and tallied 0.80 blocks/set in half-time action as a freshman. That has continued this year, as she currently owns a team-best 0.98 blocks/set to rank fifth in the MVC, but she has added expanded offensive production to her game as well. In the eight matches her and Victoria Bulmahn have played together, Hart has averaged 2.53 kills/set on .311 hitting out of the middle, reaching double figures in kills in seven of those contests after hitting double figures just seven times in her first two seasons.