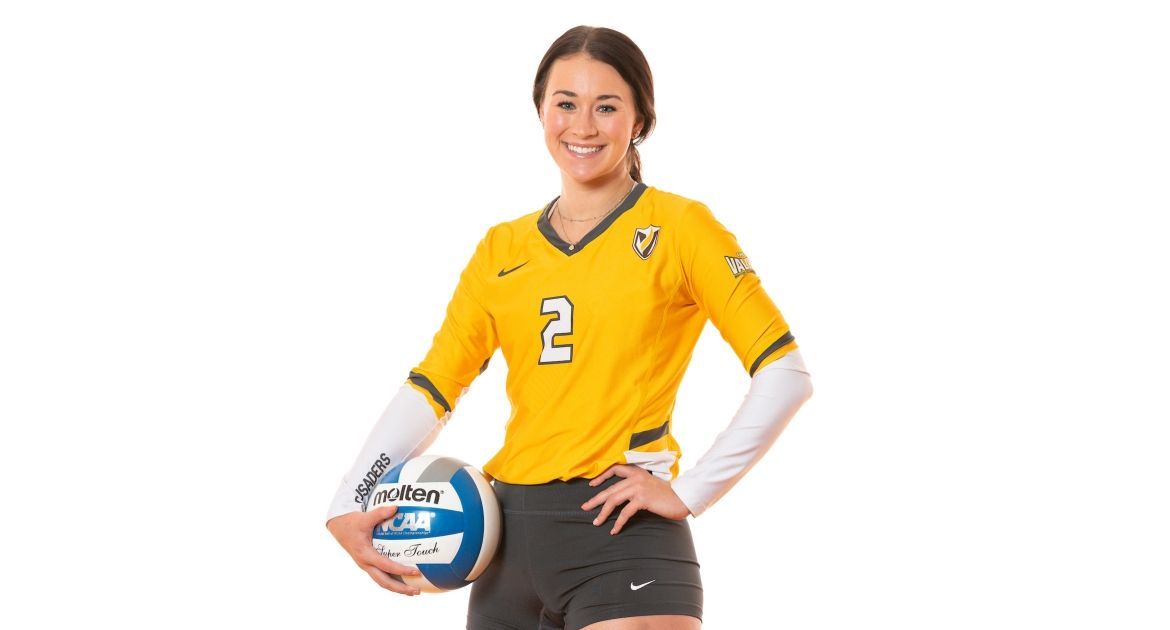 This Week in Valpo Volleyball: In the middle of a tight pack in the MVC standings with two weekends of regular season play remaining, the Valpo volleyball team looks to carry the momentum from last weekend’s sweep into its final home series of the season as it hosts Indiana State on Sunday and Monday. Valpo will honor its three seniors who will be playing their final matches at the ARC over the course of the two days.

Previously: Valpo entered last weekend in search of its first-ever win over UNI and came away from the weekend with two victories over the Panthers, earning a five-set win on Sunday and sweeping UNI on Monday. Jillie Grant led the way offensively with 28 kills over the two contests.

Looking Ahead: The regular season comes to a close next weekend at Evansville, with the two-match series taking place on Saturday and Sunday, March 27 and 28.

Following the Action: Both matches this weekend are scheduled to be broadcasted live on ESPN+. WVUR is scheduled to have radio broadcasts of both matches as well. Links for the live video and audio, as well as live stats, will be available via ValpoAthletics.com.

Head Coach Carin Avery: In her 19th season as head coach at Valparaiso, Carin Avery has won 421 matches (421-205, .673) at the helm of the Brown and Gold and has led Valpo to three league regular season and tournament titles, as well as three NCAA Tournament appearances. A two-time league Coach of the Year, Avery has coached 61 All-League recipients over her tenure at Valpo. She is Valpo’s all-time leader in both victories and winning percentage, and owns a 476-229 (.675) record overall as a head coach.

Series History: The all-time series between Valpo and ISU is tied 14-14, but Valpo owns a 9-3 advantage under Coach Avery and is 4-2 since joining the MVC. Valpo has won each of the last four meetings over the last two seasons, all in straight sets.

Scouting the Opposition: Indiana State enters the weekend with a 6-9 overall record and is 6-8 in MVC play, currently eighth place in the conference standings. The Sycamores lost a pair of matchups last week against Drake after sweeping Southern Illinois the previous weekend. Madeline Williams leads ISU with a .267 hitting percentage and averages 2.25 kills/set, while in the back row, Melina Tedrow tallies 5.19 digs/set.

Digging Deep: Valpo continued its long tradition of strong back row play in 2019, finishing the year ranked ninth nationally in total digs and 26th in digs/set. The Brown and Gold have ranked among the top-30 nationally in digs/set in each of the last 10 seasons, including leading the nation with 20.03 digs/set in 2017 to go along with a fourth-place rank in 2010 and a sixth-place finish in 2015. 2018 saw Valpo lead the nation in a digs category as well, as it posted 2,613 total digs - a mark which not only ranked first nationally for total digs, but also set a program single-season record and a Division I record in the 25-point era. Valpo currently sits fifth nationally with 20.49 digs/set.

Celebrating the Seniors: Valpo will recognize three members of its senior class who will be playing their final matches at the ARC this weekend. Melissa Flynders, who has appeared in 90 matches and owns 585 career digs, will be honored on Sunday. Then on Monday, the program will recognize Jaclyn Bulmahn (107 career matches, 599 kills, 110 blocks) and Ally Cummings (97 matches, 523 kills, 240 digs, 137 blocks). The trio have been a part of 67 victories over their four years at Valpo, including the program’s first-ever postseason wins in the 2018 NIVC.

A Look at the Standings: With four games remaining in the MVC regular season, just four games separate first place from eighth place, and Valpo finds itself right in the middle of that group. Valpo’s 8-6 record is currently good for fifth place, but is just two games back of conference-leading Bradley and just one game out of second place. On the flip side, Valpo is just one game up on seventh place and two games up on this weekend’s opponent, Indiana State, in eighth place. One win over the final four matches of the season would secure Valpo’s spot in the MVC Tournament, as the top eight teams earn spots in this year’s bracket.

A Program First: Valpo earned its first-ever wins over UNI in the weekend sweep, as the Panthers had owned a 14-0 record in the all-time series, which included a 1995 NCAA Tournament play-in match and eight meetings in Valpo’s first three years in the MVC. Monday’s win was especially notable, as it was the first three-set win by an MVC program over UNI in regular season conference play since November 2017. Valpo also beat Illinois State earlier this year for its first MVC win over the Redbirds, meaning that the Brown and Gold have now beaten every Valley team at least once since joining the conference.

Going the Distance: Valpo’s opener with UNI went the full five sets, as Valpo took the first two sets before the Panthers claimed sets three and four. Valpo eventually pulled out the win in five sets. Valpo has now gone five sets in seven of its 16 matches this year - after losing the first four five-set contests of the year, the Brown and Gold have won each of the last three that have gone the distance.

Finishing in Three: It had been over a month since Valpo had a match end in the minimum three sets before the Brown and Gold swept Bradley in the opener of the two-match series March 7. Valpo’s only other three-set matches so far this season were a non-conference win over Butler on January 29, and most recently the sweep of UNI March 15. Having had only two three-set matches so far through 14 MVC matches this year is a complete 180 from the norm, as in its first three years in the conference, 28 of Valpo’s 54 MVC contests were decided in three sets (18-10).

Cookerly Moves On Up: Senior libero Rylee Cookerly continued her moves up multiple career digs charts last weekend. On Sunday, Cookerly moved into fourth in MVC history in career digs, and Monday saw her earn a spot among the top-25 in NCAA Division I history in the category. She enters the Indiana State series with 2,439 career digs, currently good for 23rd in D-I history and just 17 away from 19th place. She is also just 43 digs away from third place in MVC history in the category. While she averaged “only” 4.75 digs/set in the two wins over UNI last weekend, Cookerly is still posting a career-best 5.88 digs/set on the season - good for ninth nationally.

Bulmahn Sets Things Up: A two-time MVC Freshman of the Week selection this year, rookie Victoria Bulmahn continued her strong play at the setter position last weekend as Valpo swept UNI, averaging 9.50 assists and 2.00 digs per set. She tallied 47 assists in the five-set win on Sunday, and dished out 29 assists in Monday’s sweep as Valpo hit .221 for the match. Bulmahn also recorded 10 digs in the Monday victory to pick up her 12th double-double of the year. On the year, Bulmahn leads the MVC with 10.83 assists/set, a mark which ranks 26th nationally and is good for second among D-I freshmen.

Jaclyn Turns On the Jets: Senior Jaclyn Bulmahn hit .295 with 2.88 kills/set to help Valpo to a series sweep of UNI last weekend - the program’s first-ever wins over the Panthers. Bulmahn opened the weekend with 14 kills in Valpo’s five-set win on Sunday while also tying her career high with five blocks. She then posted nine kills without an attack error on Monday, hitting .409 in Valpo’s three-set sweep. On the year, Bulmahn ranks second on the team with 2.77 kills/set and is hitting at a .237 clip - nearly 100 points better than her hitting percentage a season ago.

Big Blockers: Valpo averaged 2.50 blocks/set last weekend in the pair of wins over UNI, with the two middles leading the way. Junior Haley Hart tied her career high and the season best by any Valpo player as she was in on eight blocks in the Sunday five-set win over the Panthers. Hart currently ranks fifth in the Valley, averaging 1.02 blocks/set. Meanwhile, senior Peyton McCarthy averaged 1.12 blocks/set over the two wins. She posted five blocks in the Sunday victory, including rejections to give Valpo points 12 and 13 in their 15-13 fifth-set win. McCarthy then led Valpo with four blocks in Monday’s three-set sweep, including a solo block to close out a third set which had gone to extra points.