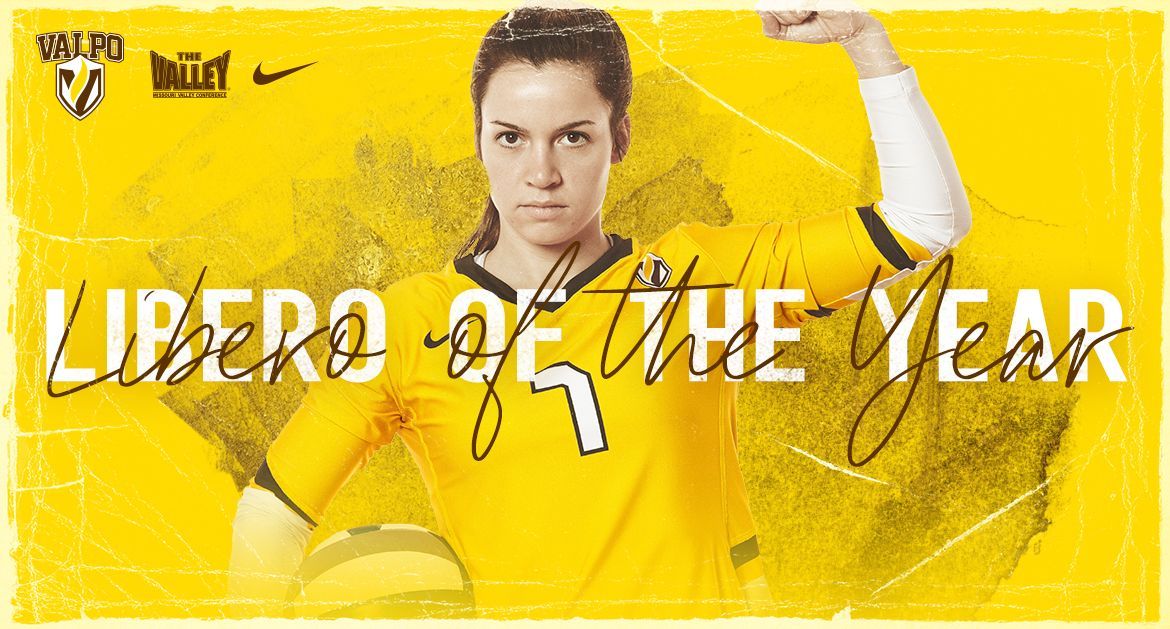 Cookerly earned the Libero of the Year award after another stellar regular season patrolling the back row for Valpo. She leads the MVC and ranks 10th nationally with 5.78 digs/set entering the MVC Championship. Cookerly has been in double figures in digs in each of her 18 matches this year, including 20+ digs 12 times and 30 or more on four occasions — highlighted by a season-high 40 digs at #13 Notre Dame.

Cookerly has moved into second place in Valpo history third place in MVC history with 2,514 career digs and will enter the top-15 in NCAA history in the category this week. She becomes the first player to be named MVC Libero of the Year in back-to-back seasons since Illinois State’s Emily Orrick in 2013 and 2014.

Victoria Bulmahn received the Freshman of the Year award and a spot on the MVC All-Freshman Team for her work running the Valpo offense at setter this spring. A three-time Freshman of the Week honoree this season, Bulmahn currently leads the Valley and ranks 24th nationally with 10.84 assists/set, second-most among all D-I freshmen. Valpo’s offense has averaged 13.22 kills/set in MVC play this spring, its highest total since joining the conference.

Also strong in the back row, Bulmahn ranks second on the team and 12th in the MVC with 3.57 digs/set and has been in double figures in digs 14 times. Bulmahn is Valpo’s first Freshman of the Year since joining the Valley, as a Valpo rookie last earned a Newcomer of the Year honor in 2009 when Taylor Root was the Horizon League Newcomer of the Year.

Jaclyn Bulmahn joined Cookerly as a First Team All-MVC honoree as she has enjoyed her best season this year as a senior. Bulmahn leads Valpo with 3.05 kills/set — nearly a full kill per set higher than her 2019 average — and enters the MVC Championship ranked seventh in the Valley with a .264 hitting percentage. She has reached double figures in kills 12 times and has led Valpo in the kills category nine times this spring, highlighted by a 23-kill effort against Southern Illinois and a 20-kill performance in a sweep of Indiana State — tying Valpo’s record for most kills in a three-set match in the 25-point era.

Hart earned her first career postseason award with her Second Team All-MVC selection. The junior leads the team in blocks (0.94/set), is second on the team and eighth in the MVC in hitting percentage (.263) and ranks third on the team in kills (2.55/set). Hart has reached double figures in kills 13 times, including a career-best 16 kills in Valpo’s come-from-behind win earlier this year at Drake — six of which came in the decisive fifth set. She has posted five or more blocks six times this year as well and has paced Valpo in rejections in nine matches.