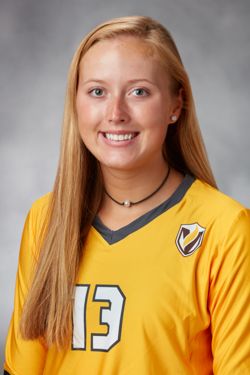 2019: Appeared in six sets over four matches as a freshman for Valpo ... debuted Sept. 6 in win over Idaho State, notching a kill on two swings ... picked up a kill and a dig Sept. 20 in win at South Dakota State ... recorded kill on lone swing of match Nov. 23 at UNI ... also appeared Sept. 20 against Kansas City.

Prep: A four-year letterwinner for the Norsemen ... Second Team All-State selection and a Senior All-Star as a senior ... Honorable Mention All-State as a junior ... three-time All-Area, All-District and First Team All-Conference selection ... conference Player of the Year as a senior ... holds school's career and single-season records for kills ... played club most recently at IPFA ... ranked among the top 15 volleyball players in the state of Iowa ... also earned three letters in basketball, three in track and field and one in softball ... an All-Conference honoree on the hardwood as a senior, helping her team to the state quarterfinals.

Personal: Daughter of Brandon and Molly Geise ... undecided upon major.