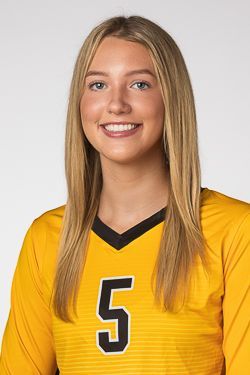 Spring 2021: Appeared in four sets over four matches ... saw action in the season opener at Loyola Jan. 25, serving twice and recording an attack ... registered an attack March 8 against Bradley ... picked up a kill on her lone swing and also was in on a block in March 21 sweep of Indiana State ... started March 28 at Evansville, registering three attacks.

Prep: A four-year letterwinner for the Trojans ... Third Team All-State honoree each of her final two seasons ... First Team All-Region and First Team All-Conference as a junior and senior as well ... helped lead Trojans to a district title as a junior, earning Team MVP honors ... also was team MVP as a senior ... closed her high school career as the school’s career leader in hitting percentage and blocks ... played last five years of club volleyball for Michigan Elite ... helped Michigan Elite 18 1's qualify for USA Open 18's nationals in 2019 ... was listed on Prep Dig’s Top 50 list as a junior and as a senior ... a member of the 2018 Ultra Ankle JVA watch list ... also earned three letters in track and field ... a First Team All-Conference honoree in track as a junior ... competed at states as a sophomore and as a junior ... member of National Honor Society.

Personal: Daughter of Connie and Keith Speck ... major is marketing.