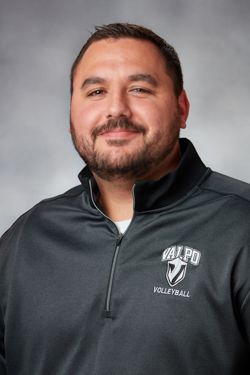 Nick Polite returned to Valpo and rejoined the volleyball program as an assistant coach in February of 2019 and enters his fourth season of his second stint in the fall of 2022. Polite previously spent three seasons on the Valpo coaching staff from 2013 through 2015.

Polite helped Valpo to one of the most successful seasons in program history in the fall of 2021, as the Beacons won 26 matches and finished the regular season tied for third place in the Missouri Valley Conference standings - the program's best finish since joining the Valley. The team then put together an exciting postseason run, sweeping four consecutive matches to advance to the title match of the NIVC.

In the last three seasons, Polite has helped lead Valpo to a trio of upper-half finishes in the Missouri Valley Conference standings and coached a pair of the conference's leaders in blocks in 2019. Over his three seasons in his current stint on staff, Valpo has boasted eight All-Conference honorees - including five First Team selections - and has claimed three major conference awards.

A 2012 graduate of Indiana State University, Polite was a two-year member of the Sycamores' track and field team.  A three-sport athlete at Washington Township H.S. in Valparaiso, he was two-time conference MVP and a three-time All-Conference honoree on the volleyball court. Polite and his wife, Laura, have one son - Liam.