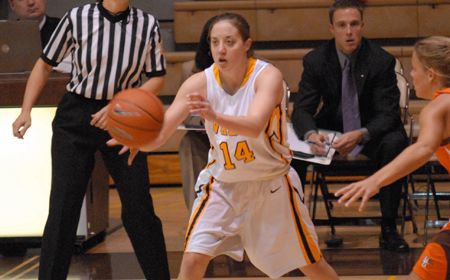 North Texas used an 11-0 run to start the second half to erase an 11-point halftime deficit and Mansa El’s three-point play with 20.9 seconds remaining put the Mean Green in front for good on the way to a 71-67 victory over Valparaiso on Saturday evening in Denton, Texas.

The Crusaders committed 27 turnovers and gave up 25 offensive rebounds to North Texas, leading to 18 second chance points for the Mean Green.

“Hats off to North Texas,” head coach Keith Freeman said.  “They came at us in the second half and pressed us.   We weren’t ready to handle the ball.

Valpo’s defense was strong early, as the Crusaders allowed the Mean Green to make just one of its first 10 shots from the floor and forced six turnovers while running out to a 15-5 lead six minutes into the contest.

The Crusaders remained in control throughout the first half, and Launa Hochstetler’s (Berlin, Ohio/Hiland H.S.) three-pointer at the 2:48 mark pushed the lead to 14, 35-21.

The Mean Green cut into the lead just before intermission, but Valpo took a 38-27 lead into the break.

Both teams committed 14 turnovers in the first half, but the Crusaders held the Mean Green to just 29.4% shooting from the floor during the opening 20 minutes.

North Texas came out the second half and scored the first 11 points in under two-and-a-half minutes to tie the game at 38.  Five offensive rebounds during the span led to the rally while the Crusaders committed four turnovers as well.

Agnieszka Kulaga (Tarnow, Poland/I Liceum Ogolnoksztalcace H.S.) scored 11 of 13 points during a stretch for Valpo to push the lead back to eight, 53-45, with 13:11 to play in the game.

Jo Hall’s triple from up top tied the game at 58 for the Mean Green with 5:22 to play.  Whitney Farris (Kokomo, Ind./Kokomo H.S.) put Valpo back on top for the moment before Amber Jackson’s old-fashioned three-point play at the 4:23 mark gave North Texas its first lead of the game.

The lead changed hands seven times in the final five minutes, with Valpo taking a 64-63 lead with 1:15 to play on a Kulaga lay-in.  The Mean Green retook with a three from Tricia Lee at the 46.9 second mark, only to have Hochstetler answer with a triple of her own just 10 seconds later.

El picked up an offensive rebound and scored in the lane, while drawing a foul with 20.9 seconds remaining.  Her make from the charity stripe put the hosts on top by two.  A bad pass following the inbound gave the ball back to North Texas and the Crusaders were forced to foul.  Two free throws put the game out of reach as Valpo committed one final turnover in the final 10 seconds.

“Their scores to go ahead were not off first shots tonight,” added Freeman.  “They were off second and third shots.”

Hochstetler led all scorers with 19 points and also had eight assists, but also committed nine turnovers for the Brown and Gold.  Kulaga added 18 points but also had nine miscues.  Lauren Kenney (Mooresville, Ind./Mooresville H.S.) added 13 points and grabbed eight rebounds for the Crusaders.

Amber Jackson led North Texas (4-3) with 15 points and 10 boards, including eight on the offensive end.  Tricia Lee added 14 points while Hall had 11 for the Mean Green, which shot just 33.8% from the floor, but used the offensive glass to make up for the shooting difference.

Valpo had 14 turnovers in the first half and 13 more in the second.

“We just turned the ball over senselessly too many times,” concluded Freeman.

Valparaiso (3-2) will return to the Athletics-Recreation Center on Wednesday evening to battle #20/17 Purdue.  Tip-off is set for 6 p.m. with all the action carried live on WVUR (95.1-FM, Valparaiso) and online at www.valpoathletics.com.

Game Notes: The all-time series is now tied 1-1 … Hochstetler’s 19 points were a season high and two off of her career high … she has made all 17 free throw attempts she has attempted this season … this was the first time this season Kulaga did not reach 20 points … Sylwia Zabielewicz (Warsaw, Poland/Generala Wladyslawa Andersa H.S.) scored four points in the first four minutes of the game and grabbed a season-high four rebounds … Hochstetler moved into 10th place all-time at Valpo with 253 career assists , passing Megan Newcomer (1996-2000).