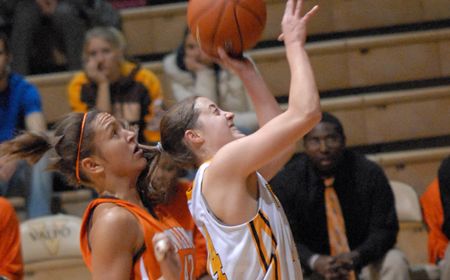 Launa Hochstetler (Berlin, Ohio/Hiland H.S.) scored a career high 24 points, including 20 in the second half, but Valparaiso could not overcome foul trouble and 26 turnovers, falling to 22nd-ranked South Dakota State 74-58 on Sunday afternoon in Brookings, S.D.

Valpo started the game strong, making six of its first nine shots from the floor, including a pair of three-pointers by Aimee Litka (South Bend, Ind./Saint Joseph’s H.S.).  The defense limited the Jackrabbits to just one make in their first nine attempts and the Crusaders took an early 16-5 lead at the 13:21 mark.

“We got off to a good start but then we went a tad fast,” head coach Keith Freeman said.

Valpo got into foul trouble late in the first half, with six players collecting two fouls each.  The hosts went to the free throw line 16 times total in the first 20 minutes, and closed the half scoring the final 12 points over the final four minutes to take a 35-27 lead into the locker room.

“It was difficult to run the offense the way we want to when we got into foul trouble,” Freeman said.  “Launa picking up her second midway through the half hurt.”

A Hochstetler triple and three-point play in the paint spearheaded an 8-0 run for Valpo to start the second half and tie the game at 35.  The Jackrabbits answered with seven of their own, five by Kristin Rotert, including a three, to go back on top.

“We did a great job at the start of the second half to battle back and tie the game,” added Freeman.

That was part of a 17-2 run that included two more three-pointers by Rotert as South Dakota State took a 54-39 lead with 13:05 to play in the game.

Valpo went cold from the floor after starting the second half four-for-five.  The Crusaders went 11 minutes without a field goal, allowing the Jackrabbits to extend the lead to 20, 65-45 at the 6:35 mark.

Lauren Kenney (Mooresville, Ind./Mooresville H.S.) was the only other Crusader to score in double figures on the afternoon, tallying 10 points while grabbing a game-high seven rebounds.  Sylwia Zabielewicz (Warsaw, Poland/Generala Wladyslawa Andersa H.S.) also grabbed seven boards in the game.

Stacie Oistad led South Dakota State (12-1) with 14 points while Jennifer Warkenthien and Rotert each had 13 points for the Jackrabbits.

Valpo held a 43-28 advantage in rebounding, but the 26 turnovers proved to be a difference as the Jackrabbits committed just eight miscues.

“We rebounded well against a team that is a good rebounding team,” said Freeman.  “We needed to take care of the ball better.  Hopefully playing against this type of competition will get us ready for the rigors of Horizon League play where there will be this kind of play night in and night out.”

Valparaiso (4-4) will take eight days off for the Christmas holiday before returning to action on Monday, December 29 in Bethlehem, Pa. as the Crusaders take part in the Christmas City Classic hosted by Lehigh.  Valpo will face La Salle in the opening round game beginning at 4 p.m. CST with all the action carried live on WVUR (95.1-FM, Valparaiso) and online at www.valpoathletics.com.