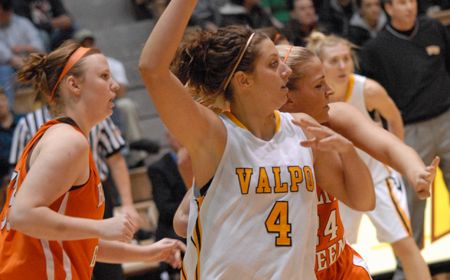 Lauren Kenney had her second double-double of the season against La Salle.
Valparaiso at LaSalle | December 29, 2008
Related Links
Related Links

Despite 22 points and 14 rebounds from Lauren Kenney (Mooresville, Ind./Mooresville H.S.), Valparaiso was unable to hold on to a nine-point halftime lead and fell to La Salle 67-62 in the opening round of the Christmas City Classic held in Bethlehem, Pa.

Kenney tied her season high set earlier at Central Michigan and was one rebound shy of her high water mark in recording her second double-double of the season.

This started slowly for the Brown and Gold as the Crusaders made just one of their first nine shots from the floor and committed four turnovers in the first 7:45 of the contest.  La Salle built a 10-2 lead before Agnieszka Kulaga (Tarnow, Poland/I Liceum Ogolnoksztalcace H.S.) lay-in stopped the dry spell.

The lay-up and steal started a 14-0 Crusader run over the next 8:36, sparked by five points from Ashley Varner (South Bend, Ind./Washington H.S.) off of the bench.  The run was part of a larger 23-2 spurt by the Crusaders in which Valpo limited the Explorers to just one field goal over a 14:24 second span.

Valpo built a 27-14 lead with 3:01 left in the first half before La Salle cut into the lead just before intermission.  The Crusaders went into the break with a 29-20 lead.

Kenney had 13 points and six boards at the break while Kulaga had dished out five assists.  The Crusaders held a 26-15 advantage on the glass and converted 11 offensive rebounds into 12 second chance points to help build the lead.

The Explorers came out of the locker room with a 9-3 run over the first three minutes to cut the Crusader advantage to three, 32-29.  A Varner triple and a lay-in by Kulaga pushed the lead back to eight for the Crusaders, but that would be Valpo’s largest advantage the rest of the way.

La Salle made four three-pointers in the first six minutes of the stanza to pull within two, 37-35, with just over 14 minutes to play, and tied the game at 39 on a pair of free throws by Ashley Gale at the 12:37 mark.

Twenty seconds later, to charity tosses by Margaret Elderton gave La Salle its first lead since the 10-minute mark of the first half.  A triple by Aimee Litka (South Bend, Ind./Saint Joseph’s H.S.) with 7:59 to play put Valpo on top for the final time, 47-46, but on the next possession Danielle Mickiewicz made a jumper to put the Explorers on top for good.

After La Salle’s lead grew to four, Kulaga converted a three-point play inside to pull within one with just over six minutes to play, but that would be as close as the Crusaders would get.

Two more three-pointers down the stretch, coupled with nine second half turnovers by the Crusaders, allowed the Explorers to pick up the victory.

Elderton led four Explorers in double figures with 18 points while Morgan Robertson added 16 and five rebounds.  Gale had 14 and Jamie Walsh had 13 for La Salle.

Kenney finished the night making 9-of-15 shots from the floor for Valpo while Litka added 15 points, including three triples.  Kulaga had 11 points, nine assists, and six rebounds while recording nine steals, and Varner finished the night with a career high eight points.

Valparaiso (4-5) will wrap up play at the Christmas City Classic on Tuesday evening against the loser of the Lehigh-North Florida game.  Tip-off is set for 4 p.m. CST with all the action carried live on WVUR (95.1-FM, Valparaiso) and online at www.valpoathletics.com.  The game can also be seen live through www.valpoathletics.com.

Game Notes: Launa Hochstetler (Berlin, Ohio/Hiland H.S.) had three assists to tie Lisa Winter (1998-2000) for eighth all-time at Valpo with 264 for her career … Kulaga’s nine assists give her 215 for her career, moving past Lynda Kukla (1988-1992) for 16th all-time in a Crusader uniform … Litka’s three triples tie her with Kathryn  Knoester (2000-2004) for eighth on Valpo’s career chart … Varner’s previous career-high was seven earlier this season against Notre Dame … the all-time series is  now tied at one … Valpo entered the game with an RPI of 44 according to collegerpi.com.