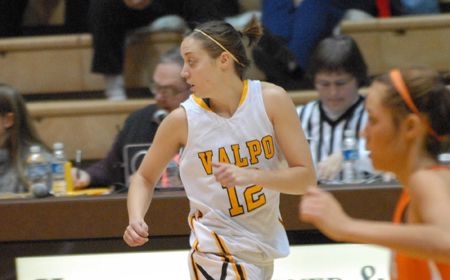 Despite shooting just 29.1% from the floor, Valparaiso’s defense held North Florida to just 23% shooting in the second half and snapped its three game losing streak, defeating the Lady Ospreys 58-49 in the consolation game of the Christmas City Classic on Tuesday evening in Bethlehem, Pa.

Both teams struggled shooting the basketball throughout the game, but the Crusaders utilized a late 12-0 run to rally from a six-point second half deficit.

The Crusaders started slowly from the floor, making just one of its first 11 shots and three of its first 21.  Defense kept Valpo in the game, holding North Florida without a field goal for nearly six minutes.  Aimee Litka (South Bend, Ind./Saint Joseph’s H.S.) scored back-to-back baskets, beginning with a three-pointer followed by a lay-in on a fast break from Launa Hochstetler (Berlin, Ohio/Hiland H.S.) to take a 21-17 lead at the 3:15 mark of the first half.

The Lady Ospreys tied the game in the final minute of the first half and the two teams went into the locker room even at 23.

Brittany Kirkland put North Florida on top early in the second half, draining a 35-foot three-pointer as the shot clock expired to begin a 7-0 Lady Ospreys’ run.

With North Florida leading 35-29 at the 15:10 mark, the Crusader defense again stepped up, holding the Lady Ospreys 6:13 without a field goal.  Six Valpo free throws tied the game at 35 and Litka’s triple from the top of the arc at the 11:05 mark put the Brown and Gold on top for good.  Hochstetler blocked a shot on the defensive end, and Whitney Farris (Kokomo, Ind./Kokomo H.S.) finished with a lay-in to cap a 12-0 spurt and put the Crusaders on top by six, 41-35.

The lead eventually grew to nine, 47-38, following a pair of Ashley Varner (South Bend, Ind./Washington H.S.) free throws at the 6:08 mark, but North Florida made one more run scoring six straight points to close within six with just over three minute to play.

Varner’s putback of a missed free throw, followed by a three-pointer at the 1:27 mark, gave the Crusaders an eight-point advantage late and the Brown and Gold made six straight free throws to capture the win.

“Ashley came up with two big plays down the stretch for us,” added Freeman.  “One on an offensive putback and another with a three in the corner.”

Litka led the Crusaders with 12 points while Leah Hochstetler (Berlin, Ohio/Hiland H.S.) scored her first nine points of the season, all on triples for the Crusaders.  Launa Hochstetler had nine assists while Varner grabbed nine boards to go along with seven points.

“We need to continue to improve heading into Horizon League play,” concluded Freeman.

Valparaiso (5-5) will return home to the Athletics-Recreation Center on Saturday afternoon to host YoungstownState.  Tip-off of the Horizon League opener for both schools is set for 1:35 p.m. with all the action carried live on the Horizon League Network.  The game can also be heard live on WVUR (95.1-FM, Valparaiso) and online at www.valpoathletics.com.

Game Notes: Senior Leah Hochstetler made her first career start in her 62nd collegiate game … this was Valpo’s first starting lineup change of the season … Lauren Kenney (Mooresville, Ind./Mooresville H.S.) was named to the All-Tournament Team … Launa Hochstetler’s nine assists tied a career high and put her alone in eighth place on Valpo’s career list with 273 … Varner’s nine rebounds were a career high, one more than the eight she grabbed last season against Central Connecticut State … Valpo outrebounded North Florida 48-41 … this was the first meeting ever between the two schools.