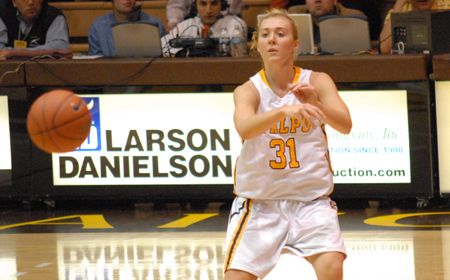 For the third time in the last four games, Valparaiso shot below 30% from the field, and on Thursday night 24.5% shooting for the game resulted in the Crusaders dropping a 54-44 decision to Wright State at the Ervin J. Nutter Center in Dayton, Ohio.

Valpo made just 12 field goals on the night, and went a span of more than 20 minutes while scoring just one basket.  The cold shooting allowed the host Raiders to overcome 31 turnovers.

“Their quickness bothered us tonight,” head coach Keith Freeman said.  “We’re in a slump shooting the ball as well.”

The first half was a turnover plagued one for both schools, with Valpo committing 12 miscues while Wright State made 15 during the first 20 minutes of action.  The Crusaders struggled shooting the basketball, making just 6-of-22 (27.3%) shots from the floor, including 1-of-8 (12.5%) from three-point range.

Wright State took a 10-6 lead eight minutes into the game, capitalizing on Crusader turnovers.  Seven turnovers during the span led to six Raider points in the early going.

The Crusaders went cold from the floor the second part of the opening stanza, not making a field goal for the final 9:13, missing their final nine field goal attempts of the half.

Free throws kept the Crusaders in close, making 7-of-8, and took their first lead, 16-15, at the 6:35 mark when Ashley Varner (South Bend, Ind./Washington H.S.) made a pair from the line.  The Crusaders extended the lead to 20-17 with 3:56 to play before intermission, but would not score the rest of the way.  Wright State closed the half with a 6-0 run, capped with a lay-in by Shay Peddy in the closing seconds, to take a 23-20 lead into the locker room.

Four more misses and three turnovers marked the start of the second half before Agnieszka Kulaga (Tarnow, Poland/I Liceum Ogolnoksztalcace H.S.) tied the game with a three-pointer at the 17:09 mark to snap a string of more than 12 minutes without a field goal.  The defense did not allow a point during the first three minutes of the second half, though, forcing five turnovers by the Raiders.

After Wright State had taken a one-point lead, 26-25, LaShawna Thomas putback an offensive rebound of an air ball as the shot clock expired to start a 13-2 run and build the lead to 12, 39-27, with just over nine minutes to play.  Thomas scored the first seven points of the run for the Raiders.

Betsy Adams (Monticello, Ind./Twin Lakes H.S.) snapped an 8:24 drought without a field goal for Valpo, as the Crusaders went more than 20 minutes with just the Kulaga triple.  Adams tried to bring the Crusaders back, making a pair of threes of her own to cut the deficit to 42-35 with 6:25 to play, but the Brown and Gold would not get any closer the rest of the way.

Peddy led all scorers with 19 for the Raiders, while Thomas had 17 points and a game-high nine rebounds.

“Peddy and Thomas are both very, very good perimeter players,” added Freeman.  “They are the two that hurt us today.”

Litka led Valpo in scoring with 13 points while Adams came off of the bench to add 10 more.

Valparaiso (6-7, 1-2) will continue its road trip on Saturday afternoon, heading to the Motor City to battle Detroit.  Tip-off against the Titans is set for 1 p.m. CST, with all the action carried live on the Horizon League Network and on WVUR (95.1-FM, Valparaiso).

Game Notes: This was head coach Keith Freeman’s 600th career game coaching women’s basketball … Adams has scored in double figures in all three Horizon League games … Valpo’s bench scored 22 points on the night, marking the third straight game the reserves have tallied at least half of the Crusaders’ points … this was the first time this year Valpo has lost when holding the opposition to 60 or fewer points … Launa Hochstetler (Berlin, Ohio/Hiland H.S.) had three assists to move into sole possession of sixth place all-time at Valpo with 290 career assists … Valpo leads the all-time series 8-3, but Wright State has won the last three meetings.