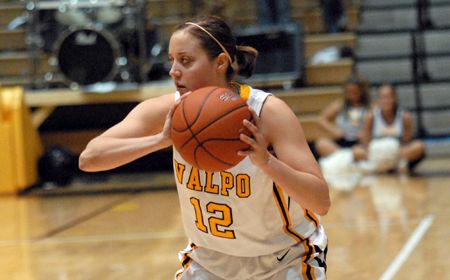 Coming Up in Crusader Hoops: After an overtime victory on the road at Detroit on Saturday afternoon, Valparaiso returns home to the Athletics-Recreation Center on Thursday evening to battle UIC, one of the three remaining unbeatens in Horizon League action.  The Crusaders are in a log jam in the middle of the conference standings entering play.

On the Air: Thursday’s game against UIC will be carried live on the Horizon League Network at horizonleaguenetwork.tv or through the link at valpoathletics.com.  WVUR’s Adam Amin and Adam Tein will carry all the action live from the ARC.  In addition, live stats are available via Gametracker through valpoathletics.com.

Series Notes: Valparaiso holds a 17-11 all-time advantage against UIC in a series that dates back to December 4, 1980.  UIC won the first five meetings ever between the two programs.  The Crusaders hold a 10-2 edge playing the Flames at home, and have won six straight contests overall between the two schools.  Last year, Valpo was a 72-63 winner on January 10 in Chicago before dousing the Flames 76-46 at the ARC on February 9.

Wrapping Up Detroit: Sylwia Zabielewicz came off of the bench to score a career-high 20 points and grab nine rebounds while Leah Hochstetler also tallied a career-best 14 points as the Crusaders earned a 70-65 overtime victory over the Titans on Saturday afternoon in Detroit.  The Titans took a two-point lead with just under two minutes to play in the extra session, only to have the Valpo defense shut the hosts out the rest of the way.  Hochstetler hit a three to put the Brown and Gold in front for good and added two free throws to seal the game.

Scouting UIC: The Flames have won four straight games, including three Horizon League contests, to sit at the top of the conference standings here in the early going.  UIC opened the season with five wins before suffering a four-game losing skid in December.  The current streak began with a win over New Mexico State.  Jessie Miller leads the Flames in scoring, averaging 12.8 points per game, ranking fifth in the conference.  Jasmine Bailey also is in the top-10 in scoring, averaging 12.2 points per game while ranking fifth in rebounding at 7.4 boards per night.  As a team, UIC leads the conference allowing opponents to shoot just 37.5% from the floor on the year.

Freeman Captures #250 at Valpo: Head coach Keith Freeman earned his 250th victory on the bench of the Crusaders on Saturday afternoon in Valpo’s win against Detroit.  Valpo’s head man for 15 seasons, Freeman is 250-175 all-time at Valpo.  He has recorded more than half of the program’s victories all-time, and has led the Brown and Gold to winning seasons in 12 of his first 14 years with the Crusaders.

Nearing 300 Assists: Launa Hochstetler needs just five more assists to reach 300 for her career wearing the Brown and Gold.  Hochstetler had five assists against Detroit and has already moved past Lauren Bechtold (2002-2006) into sole possession of sixth place all-time with 295 helpers for the Crusaders.  She is looking to become just the sixth player in Valpo history to reach the 300 assist mark for a career.  Hochstetler needs 45 more helpers to move into the top-five all-time wearing the Brown and Gold.

An All-Around Career Game: Leah Hochstetler posted numerous career highs while helping Valpo to victory at Detroit.  The senior guard tallied a career-best 14 points, three more than her previous best.  She also had four rebounds, one more than her previous high, as well as a career-high four assists, three more than she had ever had in a game.  Hochstetler also racked up a steal and a blocked shot to cap the all-around game.

Zabielewicz Just Misses Double-Double: Coming off the bench last Saturday, Sylwia Zabielewicz was just one rebound shy of her first double-double with the Crusaders.  The junior college transfer scored 20 points, 14 more than she had in any other game this season, while pulling down nine boards, two more than her previous season high.  It was also the first game this season she had not started.

Lineup Shuffling: After maintaining the same starting five for the first nine games of the season, the Crusaders have now used four different lineups in the last six games.  Aimee Litka and Launa Hochstetler are the only to Valpo players to start all 14 games.

Among the Nation’s Best at the Free Throw Line: Launa Hochstetler and Agnieszka Kulaga rank 18th and 19th respectively in all of NCAA Division I at the free throw line this season.  Hochstetler leads the Horizon League shooting 88.1% (52-of-59) from the free throw line this season.  For her career, the senior is an 85.0% shooter from the charity stripe and needs 19 more attempts to qualify for Valpo’s career leaderboard.  Kulaga is also shooting 88.1% from the line on the year and as a team the Brown and Gold are tops in the conference and 30th in the nation shooting 74.4% from the charity stripe.

Giving It Up: Launa Hochstetler leads the Horizon League averaging 5.0 assists per game this season.  The senior point guard registered a career-high nine helpers against North Florida.  She has recorded seven or more assists in four games and has at least four in all but four contests this year.

Stealing from the Titans: Launa Hochstetler has become a pickpocket for the Crusaders when playing Detroit.  The senior guard tied her career high with six steals on Saturday against the Titans, a number she had previously set against the same school last season.

Making the Passes Count: Valpo tied a season high on Saturday afternoon with 20 assists in the game against Detroit.  The Crusaders had only 25 field goals on the afternoon, with 80% of them coming off of assists.

First Win While Being Outshot: The win against Detroit also marked the first time in five years in which the Brown and Gold have recorded a victory when its opponents had a higher field goal percentage.

Kulaga Nearing Top-20 All-Time at Valpo in Scoring: Agnieszka Kulaga has the opportunity to move into the top-20 all-time at Valpo in scoring within the next couple of games.  The senior guard has scored  798 career points (8.8 per game), and needs just 32 more to match Jill Otto’s (1985-1989) 20th place mark of 830 points.

Freeman Reaches Several Milestones: Head coach Keith Freeman has reached three milestones already this season.  Valpo’s victory against Florida State on November 29 was the 375th of his career overall coaching women’s basketball.  He coached his 600th collegiate game at Wright State on January 8 and recorded his 250th victory on the Crusader sidelines on January 10 against Detroit.

Kulaga Nearing Top-15 in Assists: Agnieszka Kulaga had one assist against Wright State and now has 218 career assists to rank 16th all-time wearing the Brown and Gold.  Next up on the assist charts for Kulaga is Stephanie Greer (1987-1991), who is 15th with 224 career helpers, six more than the senior.

Litka Among Top-10 All-Time in Triples: Aimee Litka made one more three-pointer against Detroit to move within one triple of Heidi Diefenthaler’s (1992-1996) seventh place total of 140 treys while wearing the Brown and Gold.  Litka currently ranks eighth with 139 career three-pointers.

Smart Students as Well: Valpo has had three players named U.S. Army Scholar-Athletes of the Week by the Horizon League thus far this year.  Agnieszka Kulaga earned the honor on December 19 while Launa Hochstetler captured the accolade one week later on December 26.  Ashley Varner earned the latest award for Valpo on January 8.