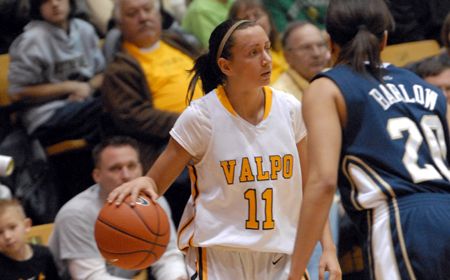 Coming Up in Crusader Hoops: Valparaiso reaches the midway part of the Horizon League schedule on Saturday afternoon as the Crusaders wrap up their three-game road trip with a visit to Green Bay.  Valpo enters the game having won four of its last five games overall following an 18-point victory at Milwaukee on Thursday night.

On the Air: Saturday’s game against Green Bay will be carried live on the Horizon League Network at horizonleaguenetwork.tv or through the link at valpoathletics.com.  In addition, the game can be heard live on WVUR (95.1-FM, Valparaiso) and through the Valpo athletics website.  Adam Amin and Danny Robertson will call all of the action live from the Kress Center.  Live stats are also available via Gametracker through valpoathletics.com.

Series Notes: Green Bay leads the all-time series against the Crusaders 16-4, including holding an 8-2 advantage in Wisconsin.  Last year, Valpo and the Phoenix split the season series, with the Crusaders winning 90-88 in overtime on January 19 at the ARC.  Green Bay also won at home, posting a 65-44 victory over Valpo on February 14.  The Crusaders last won at Green Bay on March 8, 1991, a 72-69 win over the Phoenix.

Wrapping Up Milwaukee: Aimee Litka scored 21 of her 26 points in the first half to help the Crusaders build a 20-point halftime advantage.  Valpo maintained a double digit advantage throughout the second half, and defeated the Panthers 83-65 on Thursday night in Milwaukee.  Launa Hochstetler added 18 points and Agnieszka Kulaga scored 15 more for the Brown and Gold as the Crusaders moved into a tie for third place in the Horizon League standings.  Traci Edwards led Milwaukee with 30 points and 16 rebounds.

Litka Puts on An All-Around Exhibition: Aimee Litka made six of her first seven three-point attempts on Thursday evening and finished the game shooting 10-of-17 overall from the floor on her way to a season high 26 points at Milwaukee.  The 10 field goals marked a career high for the senior, who also grabbed five rebounds, recorded five steals, and dished out three assists while playing 39 minutes.

Making the Extra Pass: Agnieszka Kulaga and Launa Hochstetler each distributed the ball to others on Thursday evening, combining of 12 of Valpo’s 19 assists on the night.  Kulaga had seven helpers, two off of her season high, while Hochstetler added five more assists against the Panthers.  The 19 assists as a team were one shy of the Crusaders’ season high set against Bowling Green and at Detroit.

Stealing a Win Against Milwaukee: Valparaiso acted as a bunch of thieves on Thursday evening in the win against the Panthers, registering 18 steals on the night, bettering the team’s previous season best by six set earlier this year at Detroit.  Aimee Litka and Launa Hochstetler each had five steals a piece, which for Litka marked a new career high.  As a team the Crusaders were just three steals shy of a top-10 performance all-time in school history.

Forcing Turnovers in League Play: Valpo is forcing opponents into 21.6 turnovers per contest in conference play this season.  The Crusaders forced three league schools to commit more that 25 turnovers, including registering 27 and 31 takeaways against Cleveland State and Wright State respectively.  Valpo is +4.6 in turnover margin against Horizon League foes this season.

Kulaga Breaks Out Offensively: Agnieszka Kulaga’s 15-point performance against Milwaukee was just the senior’s second double figure scoring game in her last eight contests.  It was also her highest scoring game since Purdue on December 10, when she scored 17 or more points in each of the first six games this season.

Hochstetler Continues to Produce Offensively: Launa Hochstetler scored 18 points against the Panthers on Thursday to tally double figures for the fourth time in the last five games.  The senior guard is scoring 14.6 points per game during the span, and has scored 18 or more points in three of the games.

Among the Nation’s Best at the Free Throw Line as Well as All-Time at Valpo: Agnieszka Kulaga and Launa Hochstetler rank 8th and 18th respectively in all of NCAA Division I at the free throw line this season.  Kulaga also leads the Horizon League shooting 89.7% (52-of-58) from the line.  Hochstetler, an 87.2% shooter this year, is Valpo’s career free throw percentage leader, making 84.9% of her attempts while Kulaga is second all-time at 83.5%.

Valpo Makes More Free Throws Than League Opponents Attempt: Valpo has made 116 free throws this season in Horizon League action.  The Crusaders have made 17 more free throws than conference foes have even attempted during these games.  On the season as a whole, the Crusaders lead the conference shooting 75.1% from the charity stripe.

Kulaga Moves Into Top-20 All-Time at Valpo in Scoring While Litka Nears the Mark: Agnieszka Kulaga moved into 20th place all-time at Valpo in scoring after tallying 15 points at Milwaukee.  The senior guard has scored  833 career points, to plass Jill Otto (1985-1989) and is seven points shy of Mo Drabicki (1994-1998) for 19th place.  Aimee Litka, meanwhile, is just five points behind Kulaga and looking to crack the top-20 herself in the next couple of games.

Litka and Kulaga Among League’s Top Scorers: After scoring 26 points against Milwaukee, Aimee Litka has moved into fifth place in the Horizon League in scoring this season, averaging 12.6 points per game.  Agnieszka Kulaga ranks 10th in the conference tallying 11.5 points per night.

Surpassing 300 Assists: Launa Hochstetler’s feed to Whitney Farris with 13:53 to play in the second half against Loyola made the senior just the sixth Crusader in school history to reach the 300 assist mark for a career.  Hochstetler currently has 308 career assists and needs just 32 more helpers to move into the top-five all-time wearing the Brown and Gold.

Kulaga Moves Into Top-15 in Assists: Agnieszka Kulaga had seven assists against Milwaukee and now has 230 career assists to rank 13th all-time wearing the Brown and Gold.  She moved up three spots following the effort, and now trails Jeanette Gray (1999-2003) by eight thefts for 12th on the all-time list.

Litka Nearing Top-5 All-Time in Triples: Aimee Litka made six more three-pointers against Milwaukee and has passed Megan Newcomer (1996-2000 to move into sixth place all-time at Valpo for triples made in a career.  Litka now has 148 treys in four seasons, and trails Jamie Gutowski (2002-2006) by just three triples for fifth place all-time.