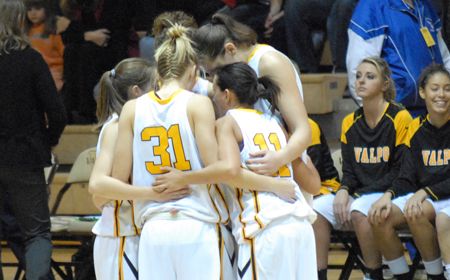 Coming Up in Crusader Hoops: Valparaiso takes to the court for a Sunday afternoon matinee looking to rebound from three losses in its last four games following a 62-47 setback against Detroit at home on Friday night.  The Crusaders entertain Wright State, a team that is just one game ahead of the Brown and Gold in the middle of the pack in a tight Horizon League race.

On the Air: Sunday’s game against Wright State will be carried live on the Horizon League Network at horizonleaguenetwork.tv or through the link at valpoathletics.com.  In addition, the game can be heard live on WVUR (95.1-FM, Valparaiso) and through the Valpo athletics website.  Dave Schroeder and Deon Robinson will call all of the action live from the ARC.  Live stats are also available via Gametracker through valpoathletics.com.

Series Notes: Valparaiso leads the all-time series against Wright State 8-4, but the Raiders have won the last three meetings between the two schools since the Crusaders have joined the Horizon League.  Valpo is 5-1 in the series at the Athletics-Recreation Center.  In the first meeting this season, the Raiders posted a 54-44 victory in Dayton back on January 8.  Aimee Litka led the Crusaders scoring 13 points as Wright State held the Brown and Gold to just 24.5% shooting for the game.  Shey Peddy led Wright State with 19 points while LaShawna Thomas added 17 points and nine rebounds as the Raiders overcame 31 turnovers.

Wrapping Up Detroit: The Titans held Valpo to just 26.7% shooting for the game and the Crusaders went more than 11 minutes without a field goal in the first half as Detroit posted a 62-47 win on Friday night at the ARC.  Lauren Kenney led Valpo with 13 points and 10 rebounds while Brigid Mulroy and Heather Hatter each had 13 for the Titans.

Scouting Wright State: The Raiders saw their three-game winning streak snapped on Friday evening as Wright State suffered a 58-45 defeat at Butler.  LaShawna Thomas leads the Raiders in scoring and ranks third in the Horizon League averaging 13.5 points per game this season.  Shey Peddy adds 12.3 points per night for Wright State, seventh best in the conference.  She also leads the league in steals averaging 3.1 per night.  Wright State is the league’s top three-point shooting team, making 39.2% from beyond the arc this year.

Kulaga and Hochstetler Earn Academic All-District Honors: Agnieska Kulaga has been named to ESPN The Magazine’s Academic All-District V First Team while Launa Hochstetler was voted to the Second Team as selected by CoSIDA.  Kulaga leads the Horizon League in free throw shooting this season and in the classroom already has earned her bachelor’s degree.  The senior is now pursing her master’s degree in business administration.  Hochstetler is the conference’s top assist-maker, and ranks second in free throw shooting.  In the classroom, the senior is a double major in accounting and finance.

Kenney Records More Double Trouble: Lauren Kenney registered her third double-double of the season on Friday night against Detroit, scoring 13 points and grabbing 10 rebounds.  It was her biggest output in both categories since returning from an ankle injury that kept her sidelined for six games.  Kenney also had double doubles against Notre Dame (11 points, 15 rebounds) and La Salle (22 points, 14 rebounds).

Hochstetler Scoring in Double Figures Rather Regularly Again: After going through a scoring slump midway through the season, Launa Hochstetler is back tallying double figures regularly again.  The senior guard has posted double figures in five of her last seven games, including a 24-point effort against UIC and a pair of 18 point outbursts.  Hochstetler had scored in double figures in four of five games in late November and early December before struggling early in league play.

Outrebounded of Late: After starting the season crashing the glass, Valpo has been outrebounded in six straight games and eight of its last nine after being outboarded 49-34 on Friday against Detroit.

From Downtown: Valpo leads the Horizon League averaging 6.1 three-pointers per game this season.  The Crusaders have already made 122 triples this year, led by Aimee Litka who has made 46 (2.3 per game).  The senior is second in the Horizon League in triples per game individually.

Among the Nation’s Best at the Free Throw Line This Year...: Agnieszka Kulaga and Launa Hochstetler rank 5th and 20th respectively in all of NCAA Division I at the free throw line this season through games of February 5.  Kulaga also leads the Horizon League shooting 89.7% (52-of-58) from the line this year while  Hochstetler is an 85.7% (68-of-78) shooter this year.

... and Also All-time at Valpo: Launa Hochstetler and Agnieszka Kulaga both have surpassed the 225 attempt minimum from the free throw line to qualify on the all-time free throw percentage charts at Valpo.  Hochstetler enters the game tops all-time as an 84.4% career free throw shooter while Kulaga ranks second making 83.6% of her attempts.  Entering this season, Mo Drabicki (1994-1998) was at the top of the list shooting 83.0% for her career.

Litka Moves Into Top-20 All-Time at Valpo in Scoring, Kulaga Nearing Mark: Aimee Litka has moved into 19th place all-time at Valpo, passing Mo Drabicki (1994-1998) with 841 career points.  She is 27 points shy of Kathryn Knoester (2000-2004) for 18th on the Crusaders’ all-time scoring charts.  Agnieszka Kulaga has moved within two points of Drabicki to move into the top-20 as well.  Kulaga enters play with 838 career points.

Surpassing 300 Assists: Launa Hochstetler’s feed to Whitney Farris with 13:53 to play in the second half against Loyola made the senior just the sixth Crusader in school history to reach the 300 assist mark for a career.  Hochstetler currently has 311 career assists and needs just 29 more helpers to move into the top-five all-time wearing the Brown and Gold.

Kulaga Moves Into Top-15 in Assists: Agnieszka Kulaga had two assists against Detroit and now has 233 career assists to rank 13th all-time wearing the Brown and Gold.  She now trails Jeanette Gray (1999-2003) by just five helpers for 12th on the all-time list.

Litka Moves Into Top-5 All-Time in Triples: Aimee Litka made one more three-pointer against Detroit on Friday night and has matched Jamie Gutowski (2002-2006) to move into fifth place tie all-time at Valpo for triples made in a career.  Litka now has 151 treys in four seasons, and is 20 triples shy of Sarah Lenschow’s fourth place total of 171 threes.