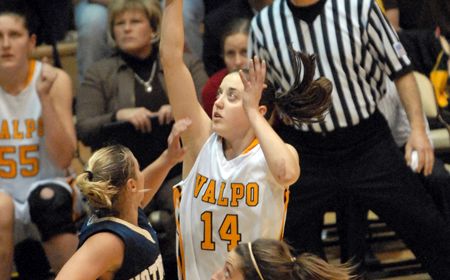 Launa Hochstetler led Valpo with 22 points and six assists.
Wright State at Valparaiso | February 08, 2009
Related Links
Related Links
Valparaiso held off a second half rally by Wright State on Sunday afternoon, as the Crusaders saw the Raiders erase their 10-point lead, but held on to post a 64-58 victory at the Athletics-Recreation Center.

Launa Hochstetler (Berlin, Ohio/Hiland H.S.) led the Crusaders with 22 points and six assists, while making 6-of-7 from the free throw line including two in the final 14 seconds to put the game out of reach.

“Launa had an exceptional game in all areas for us today,” head coach Keith Freeman said.  “She controlled the ball on defense, handled the ball well, made good decisions, and was able to finish some plays at the rim.”

Valpo had a 10-point advantage late in the first half, and a seven-point lead at the break before Wright State made several runs.  The Raiders scored the first five points of the second half to cap an 8-0 run spanning intermission and close within two, 35-33 on a three-point play by Maria Bennett.

Agnieszka Kulaga (Tarnow, Poland/I Liceum Ogolnoksztalcace H.S.) jump-started an 8-0 run of the Crusaders with a jumper and Hochstetler followed with a triple as the Crusaders pushed the lead back to 10, 43-33, with 14:43 to play in the game.

Hochstetler’s three was Valpo’s last field goal for the next 10:17 until she hit another triple.  In the meantime, Wright State went on a 13-3 run to tie the game on a Bennett three with 7:46 to play before Hochstetler stepped up on the next possession and regained the lead for the Crusaders for good.

The Brown and Gold was able to push the lead back to six with just over five minutes to play, only to see Wright State fight back against.  Tatianna Hall’s jumper with four minutes left brought the Raiders within one, 53-52, but that would be as close as the visitors would get the rest of the way.

Valpo scored the next seven points, starting with a driving three-point play by Hochstetler, and made seven-of-seven free throws over the final three minutes to secure the victory.

The first half was close until a late 12-2 run by the Crusaders over five minutes put Valpo on top 35-25.  Shey Peddy hit a three as time expired for the Raiders to make it 35-28 at the break, setting up the final 20 minutes.

“I liked how we played the first half,” said Freeman.  “We made an improvement on closing out possessions.  They got zero offensive boards in the first half.”

Peddy led Wright State (10-12, 6-5 Horizon League) with 15 points while Bennett added 14 off of the bench.  Molly Fox had 12 points and six rebounds while LaShawna Thomas scored 10 points while fouling out in just 20 minutes of play.

Valpo finished the game making 20-of-24 (83.3%) shots from the free throw line to make up for just six second half field goals.  The Crusaders shot 39.6% for the game compared with Wright State’s 42.3%.  Valpo forced 23 turnovers to help offset 40% shooting from three-point range by the Raiders as well.

“We sustained a greater level throughout the game today,” concluded Freeman.  “There were moments when we really moved the ball well.”

Valparaiso (11-10, 6-5) will head to Chicago for a pair of games next week, beginning on Thursday night at Loyola.  Tip-off at the Gentile Center is set for 7 p.m., with all the action shown live on the Horizon League Network and also carried live on WVUR (95.1-FM, Valparaiso).

Game Notes: This was Valpo’s first victory against Wright State since 1994, snapping a three-game skid against the Raiders … the Crusaders lead the overall series 9-4 though, including 6-1 in Valparaiso … Hochstetler scored in double figures for the sixth time in the last eight games … Kulaga is now shooting 90.2% (55-of-61) from the free throw line this season … Kulaga passed Mo Drabicki (1994-1998) for 20th place all-time at Valpo in scoring with 848 career points … Litka made two more three-pointers to move past Jamie Gutowski (2002-2006) into sole possession of fifth place all-time at Valpo with 153 career treys … Valpo and Wright State are now tied for fifth place in the Horizon League standings, just a half-game behind UIC for fourth place and one full game behind Cleveland State for third.