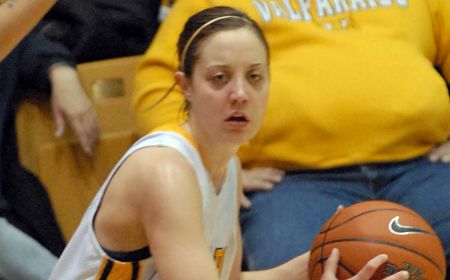 Leah Hochstetler is one of four seniors to be honored prior to the game. (Ray Acevedo)
Milwaukee at Valparaiso | February 28, 2009
Related Links
Related Links

Coming Up in Crusader Hoops: Valparaiso will wrap up the home portion of the 2008-2009 regular season on Saturday afternoon for a Senior Day contest against Milwaukee at the ARC.  The Crusaders will honor the four members of their senior class prior to tip-off of the key game in the battle for seeding for the upcoming Horizon League Tournament.

On the Air: Saturday’s game against Milwaukee will be carried live on the Horizon League Network at horizonleaguenetwork.tv or through the link at valpoathletics.com.  In addition, the game can be heard live on WVUR (95.1-FM, Valparaiso) and through the Valpo athletics website.  Adam Tein and Adam Amin will call all of the action live from the ARC.  Live stats are also available via Gametracker through valpoathletics.com.

Series Notes: Milwaukee leads the all-time series between the two schools 8-3, including a 3-1 advantage at the ARC.  The Crusaders won the first meeting between the teams this season though, posting an 83-65 victory in Milwaukee on January 29.  Aimee Litka made six three-pointers on her way to 26 points in the first meeting for Valpo while Launa Hochstetler added 18 points and Agnieszka Kulaga scored 15.  Traci Edwards led Milwaukee with 30 points and 16 rebounds.

Wrapping Up Green Bay: Valpo pulled even with the Horizon League regular season champion with 3:30 to play, but the Phoenix hit two key three-pointers down the stretch to defeat the Crusaders 68-60 on Thursday night at the ARC.  Valpo shot 50% from the floor from the game, but committed 21 turnovers, leading to 22 Green Bay points.  Launa Hochstetler led the Crusaders with 17 points while Celeste Hoewisch led the Phoenix with 21 points, 15 coming after intermission.

Scouting Milwaukee: The Panthers enter the game in seventh place in the Horizon League race following a 74-71 loss at Butler in overtime on Thursday night.  Milwaukee has alternated wins and losses for 13 straight games dating back to January 15 against Wright State.  Traci Edwards leads the Horizon League in both scoring and rebounding, averaging 18.3 points and 9.0 rebounds per game.  The Panthers lead the conference as a team, outrebounding foes by 4.4 boards per contest.  Milwaukee wraps up the regular season at Green Bay next Saturday.

Thanks Seniors: Valparaiso will honor the four members of the senior class in a ceremony prior to tip-off on Saturday.  Seniors Launa Hochstetler, Leah Hochstetler, Agnieszka Kulaga, and Aimee Litka then will all address the crowd following the day’s action.  The four have combined for 2,841 career points, 938 career rebounds and 760 assists.

Super Women: Launa Hochstetler played all 40 minutes against Green Bay on Thursday evening, marking the second straight contest the senior guard has not come out of.  It marked the fourth time this season she has each played all 40 minutes in a game, also doing so against Purdue and Wright State, in addition to Butler last Saturday.

Looking to Assure a .500 Season: With its next victory, Valparaiso will be assured of finishing .500 or better for the 17th time in the last 19 years.  A win would also guarantee the Crusaders its second straight .500 Horizon League mark since joining the conference prior to last season.

Scoring Machines: Agnieszka Kulaga and Launa Hochstetler are both paving the way offensively for the Crusaders as of late.  Kulaga has scored 10 or more points in six straight contests after tallying 11 against Green Bay on Thursday evening.  Hochstetler’s streak of double figure games has reached seven following her 17-point effort on Thursday as well.

A Tight Race: With three games remaining in the regular season, Valpo currently sits in fourth place, one game ahead of fifth place UIC and Wright State in the race to host the final quarterfinal in the Horizon League Tournament.  The middle of the standings are bunched though, as the Crusaders are just a game-and-a-half up on seventh place Milwaukee, with the seventh place finisher having to host an opening round game two nights prior to the quarterfinals.

Home Court Advantage: Valpo has posted an 8-4 mark at home this season to continue its stellar play at the Athletics-Recreation Center.  The Crusaders have not lost more than four home games in a season since 2000-2001 and have posted a 79-24 (.767) record at the ARC since then.  This year, Valpo defeated #23/21 Purdue at home and opened the year with a win against Bowling Green.  Since that game, the Falcons have not lost, winning 23 consecutive games.

Among the Nation’s Best at the Free Throw Line This Year...: Agnieszka Kulaga and Launa Hochstetler rank 6th and 39th respectively in all of NCAA Division I at the free throw line this season through games of February 26.  Kulaga also leads the Horizon League shooting 89% (65-of-73) from the line this year while  Hochstetler is an 84.3% (91-of-108) shooter this year.

... and Also All-time at Valpo: Launa Hochstetler and Agnieszka Kulaga both have surpassed the 225 attempt minimum from the free throw line to qualify on the all-time free throw percentage charts at Valpo.  Hochstetler enters the game tops all-time as an 83.9% career free throw shooter while Kulaga ranks second making 83.7% of her attempts.  Entering this season, Mo Drabicki (1994-1998) was at the top of the list shooting 83.0% for her career.

Kulaga and Litka Move Into Top-20 All-Time at Valpo in Scoring: Agnieszka Kulaga and Aimee Litka continue to chase one another on the all-time scoring charts.  Kulaga has moved into 16th place passing Heidi Diefenthaler (1992-1996) with 910 career points after scoring 11 against Green Bay on Thursday.  Litka has moved into 18th place all-time at Valpo with 894 career points, passing Michelle Russell (1991-1994).  Kulaga needs 10 more points to match Sarah Schmoyer’s (1992-1996) 15th place mark of 920 points while Litka needs two more to match Diefenthaler and 16 to match Kulaga.

Kulaga Nearing Top-10 and 250 Total Assists: Agnieszka Kulaga had three assists against Green Bay and now has 248 career assists to move past Megan Newcomer (1996-2000) into 11th place all-time wearing the Brown and Gold.  She now trails Kathryn Knoester by just nine helpers for 10th on the all-time list, and needs two to become the 11th player to record 250 for a career.

Litka Moves Into Top-5 All-Time in Triples: Aimee Litka made one more three-pointer against Green Bay on Thursday evening and has moved into fifth place all-time at Valpo for triples made in a career.  Litka now has 162 treys in four seasons, and is nine triples shy of Sarah Lenschow’s fourth place total of 171 threes.