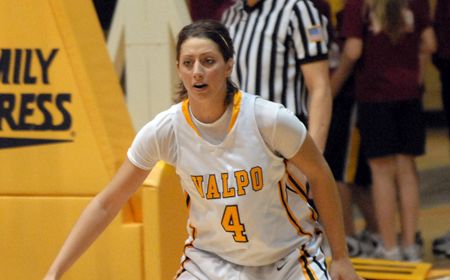 Junior Lauren Kenney (Mooresville, Ind./Mooresville H.S.) made Senior Day a special one for the four graduating members of the Valparaiso basketball team on Saturday afternoon, scoring 21 of her career-high 26 points in the second half as the Crusaders defeated Milwaukee 67-64 at the Athletics-Recreation Center to remain in fourth place in the Horizon League standings heading into the final weekend of play.

“I’m so proud of our kids today,” head coach Keith Freeman said.  “It is so hard to come out and play on Senior Day.  Those four kids have poured their heart and sole into our program.”

Kenney had three straight “and-one” opportunities in the second half as Valpo rallied from a three-point halftime deficit.  It marks the just the second time in 11 tries this season the Crusaders have rallied after trailing at the break.

Milwaukee, up 29-26 at intermission, scored on its first possession of the second half, before Valpo went on a run.  A 10-2 spurt over a little more than five minutes, put the Crusaders on top for good.  Kenney scored six during the run while Kulaga added the other four, including capping the run with a jumper in the lane to make it 36-33 Valpo.

Kenney then went to work down low, drawing three straight fouls on Panther posts while converting lay-ins as the lead increased to 46-40 with 11:41 to play in the game.  An Litka split a pair of free throws to give Valpo a seven-point advantage before both teams went more than three-and-a-half minutes without scoring.  Kenney again scored inside to break the drought and put the Crusaders on top by nine.

After Milwaukee closed within five at the 6:31 mark, Kulaga answered with five straight, including a triple that increased the Brown and Gold’s advantage to double figures, 54-44, for the first time in the game.

The Panthers tried to claw back, but the Crusaders made 11 straight free throws down the stretch to secure the win, and assure the 17th .500 season in the last 19 years for the Valpo program.

Valpo seniors started the game strong, as Kulaga and Litka accounted for the game’s first seven points.  After the Panthers answered with an 8-2 run of its own, Valpo against scored seven straight to take a 16-8 lead eight minutes into the game.

Milwaukee went on a run late in the first half, closing the stanza with a 13-4 spurt over the final six minutes to take the halftime lead.

Kulaga finished the day with 17 points for her seventh straight game in double figures while Litka also had 12 for Valpo as three Crusaders finished in double digits.  Litka and Launa Hochstetler (Berlin, Ohio/Hiland H.S.) each finished with five assists, and for Hochstetler, she became the fifth player in school history to reach the 350 assist milestone, hitting the number on the button.

Kenney, in addition to her 26 points, had a team-high eight rebounds, including five on the offensive end.  She made 8-of-10 from the floor and converted on 10-of-12 from the free throw line.

“The big thing with Lauren is the five offensive rebounds,” said Freeman. “Those show that she’s active.  When she’s active, she spreads the defense.  She was the difference today.”

Valpo committed just eight turnovers on the afternoon, making just two miscues in the final 20 minutes, to overcome an uncharacteristic 22.7% shooting night from three-point range.  The Crusaders were also outrebounded by the Panthers 43-30.

“This was a big game,” concluded Freeman.  “Milwaukee has been playing soundly the last few games.  Now we have to go on the road.  We control our own destiny (as to hosting a quarterfinal game).  At the end of the season, our best is needed.”

With the win, Valparaiso (15-12, 9-7), has assured itself of a first round bye in the Horizon League Tournament and will not play until the quarterfinals on Wednesday, March 9.  The Crusaders will take to the road for the final two games of the regular season, beginning on Thursday evening in Cleveland, Ohio with a 6 p.m. contest against the Vikings of Cleveland State.  The game can be seen live on the Horizon League Network and can also be heard on WVUR (95.1-FM, Valparaiso).

Game Notes: Valpo swept the season series with Milwaukee after losing three times to the Panthers a year ago, including in the quarterfinals of the Horizon League Tournament … the Panthers lead the all-time series 8-4 … Launa Hochstetler moved into a tie for 10th place all-time with 115 career games played at Valpo … Kulaga has moved into 15th place all-time in school history with 927 career points, passing Sarah Schmoyer (1992-1996) … Litka moved past Heidi Diefenthaler (1992-1996) into 17th place on the career scoring list with 906 points … Kulaga had two assists and becomes the 11th Crusader to reach 250 helpers for a career.