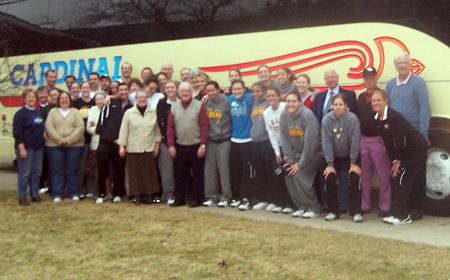 Valpo made a stop in Berlin, Ohio, the hometown of the twins on Friday.
Valparaiso at Youngstown State | March 07, 2009
Related Links
Related Links

Coming Up in Crusader Hoops: Valparaiso wraps up the 2008-2009 regular season on Saturday afternoon with a matinee against Youngstown State.  The Crusaders, winners of six of their last eight, will be looking for their third straight victory heading into next week’s Speedway Horizon League Championship.

On the Air: Saturday’s game against Youngstown State will be carried live on the Horizon League Network at horizonleaguenetwork.tv or through the link at valpoathletics.com.  In addition, the game can be heard live on WVUR (95.1-FM, Valparaiso) and through the Valpo athletics website.  Adam Amin and Adam Tein will call all of the action live from the Beeghly Center.  Live stats are also available via Gametracker through valpoathletics.com.  In addition, the game will be televised on a tape delay basis beginning at 10 p.m. EST in the Youngstown, Ohio area on MyYTV.

Series Notes: The Penguins hold a slim 13-11 all-time series advantage against the Crusaders including a 7-3 edge in Youngstown, Ohio.  Valpo has won three of the last four meetings, though, including an 86-43 victory at the ARC back on January 3 to open this year’s Horizon League schedule.  Ashley Varner led the Crusaders with 14 points while Betsy Adams and Whitney Farris added 12 each.  Tiara Scott led Youngstown State with 13 points as Valpo held the Penguins to just 24% shooting for the game.

Wrapping Up Cleveland State: Agnieszka Kulaga made her first six three-point attempts on her way to a career-high seven triples and 23 points as the Crusaders defeated the Vikings 70-52 on Thursday evening in Cleveland, Ohio.  Aimee Litka added 17 points  and Launa Hochstetler had 10 assists for the Crusaders, which broke open a four-point halftime lead early in the second half.

Scouting Youngstown State: The Penguins are still looking for their first Horizon League win of the year and have dropped 18 straight overall following a 61-42 setback against Butler on Thursday night.  Youngstown State is averaging just 50.1 points per game and have been outscored by 21.2 points per game on the year.  Tiara Scott and Nikita LaFleur lead the team in scoring averaging 8.5 points  per game.  All 12 players that have played this year have started at least two games.

Kulaga Deadly From Long Range: Agnieszka Kulaga made her first six three-pointers against Cleveland State and finished the night 7-of-9 from long range.  Her 77.8% percentage is tied for third best in school history (minimum seven attempts), while her seven made threes are tied for fourth most in a game all-time at Valpo.

Lots of Outside Shooters: With Agnieszka Kulaga making a career-high seven triples against Cleveland State, she became the sixth different Crusader on the roster to have made at least four triples in a game during her career.  Leah Hochstetler also has made seven while Aimee Litka has made six in a game.  Betsy Adams, Launa Hochstetler, and Rashida Ray have all drained four triples in a contest for the Brown and Gold during their careers.

Yet Another Winning Season: With its victory over Cleveland State on Thursday, Valparaiso has assured itself of finishing with a winning record for the 17th time in the last 19 years.  The Crusaders have also guaranteed their second straight .500 Horizon League mark since joining the conference prior to last season.

Crusaders Among the League’s Top Scorers: Valpo sports four of the Horizon League’s top-13 scorers this season.  Aimee Litka and Launa Hochstetler lead the way ranking ninth and 10th respectively, averaging 11.9 and 11.8 points per game.  Agnieszka Kulaga ranks 11th in the conference adding 11.6 points per night while Lauren Kenney is 13th in scoring at 10.8 points per game.

Hosting a Quarterfinal: Valpo has assured itself of hosting a quarterfinal game of the 2009 Speedway Horizon League Championship on Wednesday evening against either Wright State or UIC.  This will be Valpo’s first postseason home game since the 2002 WNIT quarterfinals, and the first Crusaders conference tournament game at the ARC since the 1995 Mid-Continent Conference Tournament.

Big Time Scorers: Valpo has had six different players score at least 20 points in a game this season.  Lauren Kenney and Aimee Litka lead the way having each scored 26 in a game this year while Agnieszka Kulaga and Launa Hochstetler have both poured in 24 in a game.  Leah Hochstetler has scored a season-high 23 points while Sylwia Zabielewicz tallied 20 earlier this year against Detroit.

Heading Home: On Friday’s off day between Cleveland and Youngstown, the Crusaders stopped by Berlin, Ohio for a home-cooked meal with the Hochstetler family.  This was the second stop in Berlin for the Crusaders, as Valpo also stopped by two years ago when facing Akron.

That’s A Lot of Games Played: Launa Hochstetler has moved into the top-10 all-time at Valpo for games played.  With the appearance against  Cleveland State, she moved into a tie for eighth all-time with 116 career games played.  She is one game shy of Carie Wickham (1996-2001) and Marlous Nieuwveen (1998-2002) for sixth place all-time, as those two played in 117 games in a Valpo uniform, something she should reach against Youngstown State on Saturday.

Home Court Advantage: Valpo has posted a 9-4 mark at home this season to continue its stellar play at the Athletics-Recreation Center.  The Crusaders have not lost more than four home games in a season since 2000-2001 and have posted an 80-24 (.769) record at the ARC since then.  This year, Valpo defeated #23/21 Purdue at home and opened the year with a win against Bowling Green.  Since that game, the Falcons won 25 consecutive games before falling at Miami (Ohio) this past week.

Among the Nation’s Best at the Free Throw Line This Year...: Agnieszka Kulaga and Launa Hochstetler rank 11th and 36th respectively in all of NCAA Division I at the free throw line this season through games of March 5.  Kulaga also leads the Horizon League shooting 88.3% (68-of-77) from the line this year while  Hochstetler is an 84.3% (91-of-108) shooter this year.

... and Also All-time at Valpo: Launa Hochstetler and Agnieszka Kulaga both have surpassed the 225 attempt minimum from the free throw line to qualify on the all-time free throw percentage charts at Valpo.  Hochstetler enters the game tops all-time as an 83.9% career free throw shooter while Kulaga ranks second making 83.6% of her attempts.  Entering this season, Mo Drabicki (1994-1998) was at the top of the list shooting 83.0% for her career.

Kulaga and Litka Move Into Top-20 All-Time at Valpo in Scoring, Hochstetler on the Verge of Scoring List: Agnieszka Kulaga and Aimee Litka continue to chase one another on the all-time scoring charts.  Kulaga has moved into 15th place with 950 career points after scoring 23 against Cleveland State on Thursday.  Litka has moved into 16th place all-time at Valpo with 923 career points, passing Sarah Schmoyer (1992-1996).  Kulaga’s now needs 28 more points to match Cheryl Wilbrandt’s (1989-1993) 14th place mark of 978 points while Litka needs 27 more to match Kulaga.  Launa Hochstetler is about to move onto the top-20 list as well, needed just four more points to match Kathryn Knoester (2000-2004) with 868 career points.

Kulaga Nearing Top-10 with 250 Total Assists: Agnieszka Kulaga had three assists against Milwaukee and now has 253 career assists to move past Megan Newcomer (1996-2000) into 11th place all-time wearing the Brown and Gold.  She now trails Kathryn Knoester by just four helpers for 10th on the all-time list.

Litka Moves Into Top-5 All-Time in Triples: Aimee Litka made three more three-pointers against Cleveland State on Thursday evening and has moved into fifth place all-time at Valpo for triples made in a career.  Litka now has 168 treys in four seasons, and is just three triples shy of Sarah Lenschow’s fourth place total of 171 threes.