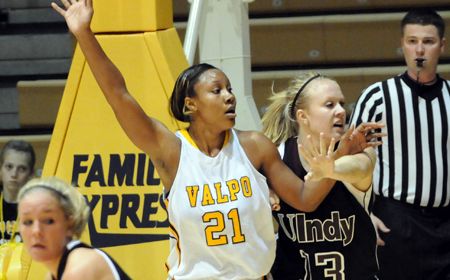 Valparaiso shot 60% from the floor and 78.6% from three-point range while forcing 22 Indiana Wesleyan turnovers defensively as the Crusaders wrapped up exhibition play on Monday evening rolling to an 87-46 victory over the Wildcats.

Kelly Watts (Gary, Ind./East Chicago Central H.S.) led the Crusaders with 17 points, shooting 6-of-9 from the floor while making all three of her attempts beyond the arc.  She also grabbed a game-high nine rebounds.  Ashley Varner (South Bend, Ind./Washington H.S.) pulled down eight boards to go along with her 11 points.

“Kelly plays very hard,” Freeman said.  “She and Varner did a good job of controlling the inside.”

“Skyler sees the floor very well and is a good passer,” added Freeman.

A 12-0 run late in the first half helped the Crusaders build the lead, as the Brown and Gold took a 39-24 advantage into the locker room.  Valpo continued to pull away during the second half.

Valpo finished the game 33-of-55 from the floor, including 11-of-14 from long range.  Indiana Wesleyan shot just 38.1% for the game, with the Crusaders holding the Wildcats to just 31.8% shooting in the final 20 minutes.

Valparaiso will open the 2009-2010 regular season on Saturday evening at the Athletics-Recreation Center.  Tip-off is set for 7:05 p.m. against Indiana Tech with the game being available on the Horizon League Network.