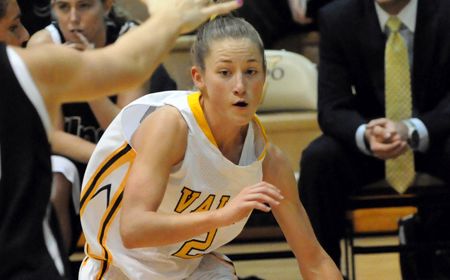 Skyler Gick scored 16 points in her collegiate debut, the most by a freshman since 2004. (Ray Acevedo)
SIU Edwardsville at Valparaiso | November 18, 2009
Related Links
Related Links

Coming Up in Crusader Hoops: After starting the year with a convincing 29-point victory, Valparaiso returns to the hardwood on Wednesday evening to face SIU Edwardsville in game two of the season-opening three-game homestand at the Athletics-Recreation Center.

Series Notes: Valparaiso and SIU Edwardsville are meeting on the hardwood for the first time ever.

Upcoming Promotion: Fans can receive $2 off their ticket to both the SIU Edwardsville and Colorado State games for bringing in a canned good to benefit the Hilltop House food pantry.

Wrapping Up Indiana Tech: Betsy Adams scored a career-high 20 points, making 6-of-10 from three point range, while adding six steals as the Crusaders opened their 39th season of collegiate basketball with a convincing 86-57 victory over the Warriors at the ARC on Saturday night.  Ashley Varner added 13 points and nine boards while freshman Skyler Gick scored 16 points in her collegiate debut.  Valpo jumped out to a double digit halftime lead and extended the advantage throughout the second half.

Scouting SIU Edwardsville: The Cougars opened the season splitting a pair of home games last weekend as a 67-64 victory over Morehead State on Friday was followed by an 85-60 loss to Milwaukee on Sunday afternoon.  Raven Berry leads SIU Edwardsville averaging 14.5 points and 8.0 rebounds per game thus far this season.  Ashley Bey has chipped in 13.5 points per contest.  As a team the Cougars are forcing 23 turnovers per game but shooting just 17.5% from three-point range.

Adams Has Career Night: Sophomore Betsy Adams poured in six three-pointers, the most by a Horizon League player this season, on her way to a career-high 20 points in the season opener against Indiana Tech.  Adams made 6-of-10 from long range and 7-of-11 overall.  She also had a career high six steals against the Warriors after registering eight total swipes during her entire freshman season.

Richards Gets Starting Nod in Opener: Freshman Laura Richards got the call to start for the Crusaders at point guard in the season opener against Indiana Tech.  She became the first freshman since Ashley Varner to start her collegiate debut since Ashley Varner started at Bowling Green on November 9, 2007.

Block Party: Valparaiso blocked five Warrior shots on Saturday, more than in any game during the entire 2008-2009 season.  The last time the Crusaders blocked five shots was on February 28, 2008 at Cleveland State.

Gick Lights It Up: Skyler Gick scored 16 points in her collegiate debut against Indiana Tech last Saturday evening, finishing second on the team in scoring.  Her 16 points were the most by a Crusader freshman in any game since Tamra Braun tallied 18 points against Chicago State on March 1, 2004. Gick finished 5-of-8 from the floor and a perfect 5-of-5 from the free throw line. She also had three rebounds, three assists, and two steals.

Getting to the Glass Quickly: Sylwia Zabielewicz made the most of her 14 minutes of action in the opener against the Warriors.  She grabbed a career-high 10 rebounds to lead all players on the glass, including four on the offensive end of the floor.  She also tallied seven points and rejected a pair of shots while on the floor.

Dominating Down Low: Valpo held a 40-8 advantage scoring in the paint against Indiana Tech in the opener.  The Crusaders also outrebounded the Warriors 44-30, including a 19-9 advantage on the offensive end of the floor.

Crusaders in Openers: With the victory against Indiana Tech, Valpo is 12-26 all-time in season openers, with results from the 1973-1974 season unknown.  Valpo has now won five straight home openers dating back to the 2005-2006 season.

Longest Homestand to Open a Season Ever: With three consecutive home games at the ARC to start the year, this is the longest season-opening homestand in program history.  The Crusaders have not even had two straight home games to open a season since 1986-1987 when Carthage and Lewis visited Valpo and has never started with three straight home games.

Lending a Helping Hand: Kelly Peller, playing in her first game since the 2007-2008 season after missing last year with a leg injury, tied her career high in the opener with four assists for the Crusaders.  Valpo finished the game with 18 assists and just 14 turnovers.

Home Sweet Home: Valpo has had consistent success at the ARC over the past nine years, starting with a win against Indiana Tech this year.  Last season the Crusaders were 9-5 at home and since the beginning of the 2001-2002 campaign, Valpo has posted a 81-25 (.764) record at the ARC.