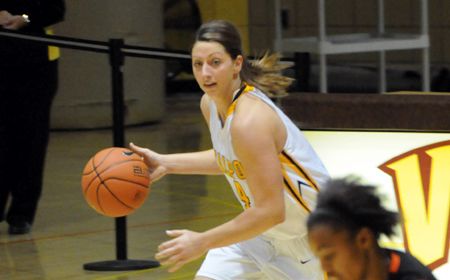 Lauren Kenney (Mooresville, Ind./Mooresville H.S.) tallied her fourth career double-double with 21 points and 16 rebounds while Betsy Adams (Monticello, Ind./Twin Lakes H.S.) also scored 21 points as Valparaiso started the season 2-0 for the first time since the 1985-1986 season with a 64-55 victory over Southern Illinois Edwardsville on Wednesday evening at the Athletics-Recreation Center.

Kenney’s 16 boards were a new career high, with eight coming on the offensive end. She finished the game shooting 7-of-10 from the floor.

“Kenney played an unbelievable game,” head coach Keith Freeman said afterwards.  “She was the difference in the game.”

Adams made three three-pointers and went 8-of-9 from the free throw line while notching her career-best, and second straight 20-point outing of the season.  She also had five assists and four rebounds.

“Betsy Adams was a coach on the floor for us tonight,” Freeman added.  “She took it as a challenge defensively as well.”

The Crusaders jumped out to an early 16-9 lead midway through the first half before going 7:23 without a field goal.  The Cougars cut the Valpo advantage to one, but the Brown and Gold would never relinquish the lead in posting the wire-to-wire victory.

The lead hovered in the 7-12 point range throughout the first eight minutes of the second half until Adams scored eight consecutive points over a 51-second span to push the lead to 50-31.

“I was really impressed with how Edwardsville came back and how hard they played,” Freeman commented.

SIU Edwardsville kept the game close by forcing 24 Crusader turnovers, including 16 in the first half.  They were able to score just 16 points off of the turnovers though, as the Valpo defense was strong most of the night.

“I thought we needed to take care of the ball better,” said Freeman.  “They get after it with their pressure.  I thought the freshmen (Skyler Gick and Laura Richards) did a pretty good job handling the pressure.  Betsy handled the ball well with five assists and one turnover, but we had some problems with the posts.”

Valpo held a decisive advantage on the boards though, outrebounding SIU Edwardsville 44-29, including a 16-10 advantage on the offensive end.  Whitney Farris (Kokomo, Ind./Kokomo H.S.) pulled down six boards to aid in the cause.

“We did a nice job on the boards and only turned the ball over eight times in the second half,” Freeman added.  “Those are some positives.”

Laura Richards (Connersville, Ind./Connersville H.S.) had five assists in the game as well as Adams.

Valparaiso (2-0) will look for its first 3-0 start in program history on Sunday afternoon as the Crusaders conclude the three-game season-opening homestand hosting Colorado State.  Tip-off is set for 1:35 p.m. with all of the action carried live on the Horizon League Network.

Game Notes: This was the first meeting ever between the two schools … the 2-0 start is Valpo’s first since going Division I in 1987-1988 … the Crusaders have pulled down 44 rebounds in each of the first two games after averaging 34.0 per game last year … Kenney’s previous high in rebounds was 15 last season against Notre Dame … Adams previous scoring best was 20 in the opener this year against Indiana Tech … Ashley Varner (South Bend, Ind./Washington H.S.) added eight points and five boards on the night.