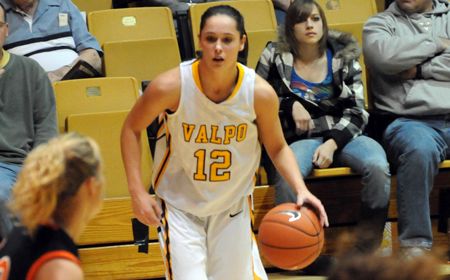 Coming Up in Crusader Hoops: Valparaiso wraps up its three-game season-opening homestand on Sunday afternoon as the Crusaders host Mountain West Conference foe Colorado State at the ARC.  Following back-to-back wins, the Brown and Gold is looking to start the year 3-0 for the first time in program history.

Series Notes: Valparaiso and Colorado State have split a pair of meetings, both in Fort Collins, Colo.  The first meeting came in the 1998 Preseason WNIT with the Rams posting a 94-71 victory.  Last year, the Crusaders defeated Colorado State 64-53 in the opening round of the Coors Rocky Mountain Invitational.  Agnieszka Kulaga tallied 20 points while Aimee Litka had 14 for the Brown and Gold in the win.

Upcoming Promotion: Fans can receive $2 off their ticket to the SIU Colorado State game for bringing in a canned good to benefit the Hilltop House food pantry.

Wrapping Up SIU Edwardsville: Lauren Kenney posted a double-double with 21 points and 16 rebounds while Betsy Adams added a career-high 21 points as the Crusaders defeated the Cougars 64-55 on Wednesday evening at the ARC.

Scouting Colorado State: The Rams opened the year with a pair of home victories before falling at Denver 68-55 on Wednesday evening.  Kim Mestdagh leads Colorado State scoring 18.3 points per game while Meghan Heimstra has added 12 points and 8.7 boards per contest.  As a team, Colorado State is outrebounding opponents by five a night.

Where No Valpo Team Has Gone Before: With a win against Colorado State, the Crusaders would start the season 3-0 for the first time in the 39-year history of the Valpo program.  Valpo already has the best start since 1985-1986 at 2-0, something the Brown and Gold had never previously done in the Division I era.

Double-Trouble: Lauren Kenney notched her first double-double of the season and fourth of her Crusader career on Wednesday night against SIU Edwardsville, scoring 21 points and grabbing 16 rebounds.  For the season now she is also averaging a double-double, 16.5 points and 10.5 boards per game.

Boards Mark New Career High: Lauren Kenney’s 16 rebounds against the Cougars on Wednesday night were a new career high for the senior.  She had pulled down 15 caroms last year against Notre Dame.  She now has five career double-figure rebounding games, including three with 14 or more boards.  Of her 16 rebounds on Wednesday, eight came on the offensive end of the floor.

Adams Has Career Start to Season: Sophomore Betsy Adams has posted career highs in back-to-back contests to start the 2009-2010 season.  After scoring a season-best 14 points as a freshman last year, she poured in 20 in the opener against Indiana Tech.  Wednesday night she followed that effort up with 21 against SIU Edwardsville.  She also had a career high six steals against Indiana Tech while notching career bests with four rebounds and five assists against SIU Edwardsville.

Getting to the Glass: After being outrebounded by nearly two boards a game last year as a team, Valpo has crashed the glass this year already.  Valpo is averaging 44 boards per contest, 10 more than last season, and are outrebounding the opposition by an average of 14.5 caroms per game thus far this year.

Freshmen Dish the Rock: Valparaiso’s two freshmen guards, Laura Richards and Skyler Gick, have done a solid job handling the basketball in the early stages of the season.  Richards already has seven assists, including five against SIU Edwardsville, while Gick has five helpers.  The duo have a combined 3:2 assist-to-turnover ratio at the point guard spot.

Finding the Easy Baskets: Valpo has scored 72 points in the paint already this season, dominating opponents down low.  The Crusaders’ inside game has helped the Brown and Gold get to the foul line as well, where the Crusaders have made 40 free throws in two games.  Nearly 75% of Valpo’s offense this year has come in the paint or at the charity stripe.

Longest Homestand to Open a Season Ever: With three consecutive home games at the ARC to start the year, this is the longest season-opening homestand in program history.  The Crusaders have not even had two straight home games to open a season since 1986-1987 when Carthage and Lewis visited Valpo and has never started with three straight home games.

Home Sweet Home: Valpo has had consistent success at the ARC over the past nine years, including two straight wins to start this year.  Last season the Crusaders were 9-5 at home and since the beginning of the 2001-2002 campaign, Valpo has posted a 82-25 (.766) record at the ARC.