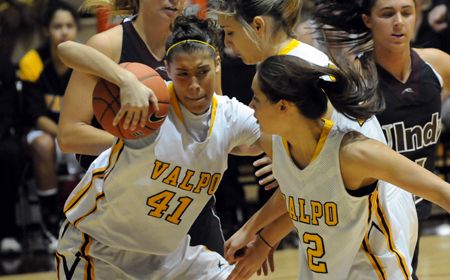 Double-doubles by Lauren Kenney (Mooresville, Ind./Mooresville H.S.) and Ashley Varner (South Bend, Ind./Washington H.S.) helped Valparaiso overcome a nine-point second half deficit and defeat Colorado State 68-58 at the Athletics-Recreation Center on Saturday afternoon.  With the victory, the Crusaders improve to 3-0 for the first time in school histor.

“I’m tickled to death with the win,” head coach Keith Freeman said after the game.  “For two years I’ve been waiting for a win like this where we shot poorly but found other ways to win.”

Leading 28-27 at intermission, the Crusaders missed their first 13 shots of the second half, while being shutout over the first seven-and-a-half minutes.  Colorado State scored the first nine points of the stanza to take a 36-28 lead, an advantage that grew to 41-32 at the 12:03 mark.

“I was disappointed we weren’t running the floor harder in the first seven minutes of the second half,” Freeman added.

Varner had nine points on the run, including a triple with 9:35 left to tie the game at 41 before finding Kenney down low to give the Brown and Gold the lead.  Kenney had six points during the outburst as well while Skyler Gick (Otterbein, Ind./Benton Central H.S.) scored all seven of her points during the span as well.

Varner’s lay-in off of an out-of-bounds play from Gick made it 58-45 Crusaders, as Valpo wrapped up its longest season-opening homestand in program history perfect for the first time in 39 seasons of women’s basketball at the school.

“We finally locked down defensively and got some transition buckets in the run,” said Freeman.

Valpo struggled shooting the ball in the first half as well, making just 23.3% of its attempts from the floor.  However, the Crusaders forced 11 Ram turnovers on the way to taking a 28-27 lead into the locker room.

The cold shooting continued out of intermission, as Valpo made just seven of its first 43 field goal attempts (16.3%).  The Crusaders heated up with the run though, finishing the game at 30.3%.  Valpo forced 27 turnovers in the game, 13 on steals, and got to the free throw line 31 times while Colorado State (2-2) attempted just nine charity tries.

Betsy Adams (Monticello, Ind./Twin Lakes H.S.) added 14 points for the Crusaders while playing 38 minutes, including a perfect 10-of-10 night from the free throw stripe.  The effort is the fourth most made without a miss in a single game in program history.

“We were driving the ball hard all night,” added Freeman.  “Most of our shots were inside four feet of the basket and we drew fouls.  We didn’t turn the ball over (just 11 times).”

Kim Stestdagh led the Rams with 20 points while Bonnie Barbee added 15 more.  Meghan Heimstra had a double-double for Colorado State with 12 points and a game-high 12 boards.

Valparaiso will take to the road for the first time this season on Tuesday evening as the Crusaders head to Muncie, Ind. to take on instate foe Ball State.  Tip-off is slated for 6 p.m. CST.

Game Notes: Valpo leads the all-time series 2-1 having won in Fort Collins, Colo. 64-54 last season … the Crusaders shot 92.3% (12-of-13) from the free throw line in the second half … Adams is 18-of-19 (94.7%) from the free throw line this season … the Crusaders have made 19 more free throws than their opponents have attempted this year … Kenney and Adams have tallied double figures in all three games this season … Kenney had seven offensive boards.