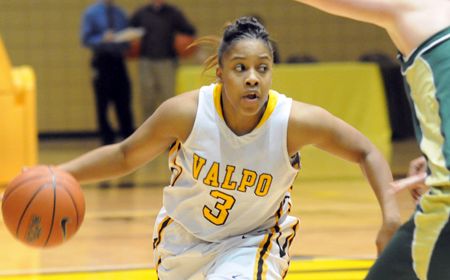 Coming Up in Crusader Hoops: Valparaiso returns to the ARC on Saturday afternoon for the final home game of the 2009 calendar year as the Crusaders host Central Michigan.  Valpo is looking to remain perfect at home this season while also trying to snap a two-game losing skid.

Series Notes: Valparaiso and Central Michigan are meeting for the sixth time in a series that dates back to 2003.  The Chippewas hold a 3-2 advantage, having won the last three contests between the two schools, including an 86-80 victory in Mount Pleasant, Mich. last year.  The schools have split a pair of meetings here at the ARC, the last a 62-45 Central Michigan win in 2006.

Wrapping Up Chicago State: The Cougars forced 15 Valpo turnovers in the second half and shot 50% from the floor for the game, including 9-of-17 from three-point range, on the way to a 62-54 win over the Crusaders Wednesday in the Windy City.  Betsy Adams led Valpo with 18 points while Ashley Varner had 10 points and a team-high seven rebounds.

Scouting Central Michigan: The Chippewas won their first game of the season Wednesday night, an 84-75 victory over defending national runner-up #25 Louisville at home.  Shonda Long leads Central Michigan in scoring averaging 17.3 points per game after pouring in 29 against the Cardinals while Britni Houghton adds 14.8 points per contest after scoring 28 against Louisville.  Kaihla Szunko is averaging 10.2 rebounds per night.

Varner Consistent Each Night: Ashley Varner has scored at least eight points in every game this season, with four of the five contests resulting in double figures for the junior.  She matched her career high with 14 points against Ball State, and is third on the team in scoring averaging 11.6 points per game.  Varner is tied for the team lead in rebounding with 8.2 per contest, having grabbed at least five boards in each game and nine or more on three occasions.

Figure Them for at Least Ten: Betsy Adams and Lauren Kenney have tallied double figures in scoring in all five games for the Crusaders this year.  Adams is averaging 17.2 points per contest on the year, second in the conference in scoring.  Kenney is adding 15.8 points per night for the Brown and Gold, third best in the league.  Each has tallied a season-high 21 points this year.

Accepting Charity: In five games this season Valparaiso has already made four more free throw attempts that its opponents have even attempted.  Valpo has shot 117 free throws (and made 88, 75.2%) while Crusader opponents have attempted just 84 charity tosses all season.

Adams Makes Them Pay for Fouling: Betsy Adams is 28-for-30 (93.3%) from the free throw line this year including a 10-of-10 effort against Colorado State.  Her performance against the Rams marked the fourth most makes without a miss ever at Valpo.  Ironically, Adams went  just 6-of-10 at the line last year as a freshman.

Getting to the Offensive Glass: After averaging just 10.4 offensive rebounds per game a year ago, the Crusaders rank second in the Horizon League averaging 15.6 second chance opportunities this season.  Lauren Kenney is second individually on the offensive glass, grabbing 4.0 rebounds per game this season after averaging just 2.3 in 2008-2009.  Against Chicago State, 12 offensive boards led to just nine second chance points though.

Intercepting Passes: Valparaiso got in the passing lanes quite frequently Wednesday night at Chicago State, registering a season-high 15 steals.   The total was the most by the Crusaders since registering 18 thefts at Milwaukee in January of last season.  The Crusaders lead the Horizon League this season with 11.8 steals per contest after averaging just 7.4 per game in 2008-2009.

More Thievery: Kelly Watts registered four steals against the Cougars on Wednesday night, marking a career-high for the transfer from Eastern Michigan.  Watts had just three thefts total this season prior to the game.  With the Eagles, Watts never had more than three steals in a game.

Gick’s Passes Lead to Scores: Freshman Skyler Gick had a season-high five assists at Chicago State, accounting for more than 38% of the team’s helpers in the contest.  On the year Gick is averaging 3.4 assists per game, tops on the team, and is second in the Horizon League with a 1.9 assist-to-turnover ratio.

More Helpers: Rashida Ray added three assists against the Cougars on Wednesday night, posting a career high for the junior.  Ray had just eight assists all of last season, but already has four this year.

Joining a New Conference Next Week?: After facing Central Michigan, the Crusaders will face three straight opponents from the Big East Conference in Pittsburgh, Notre Dame, and Cincinnati before Christmas.  Valpo will then return with a game against Auburn from the Southeastern Conference before facing either Wake Forest or San Diego State, giving the Crusaders five straight tilts against teams from power conferences.

Kenney Named Horizon League Player of the Week: Lauren Kenney was named the Horizon League’s Player of the Week on November 23 after leading Valpo to wins over SIU Edwardsville and Colorado State.  The senior forward averaged 20.0 points, 13.5 rebounds, and 2.5 steals per game while registering double-doubles in both contests for the Crusaders.

Home Sweet Home: Valpo has had consistent success at the ARC over the past nine years, including three straight wins to start this year.  Last season the Crusaders were 9-5 at home and since the beginning of the 2001-2002 campaign, Valpo has posted a 83-25 (.783) record at the ARC.