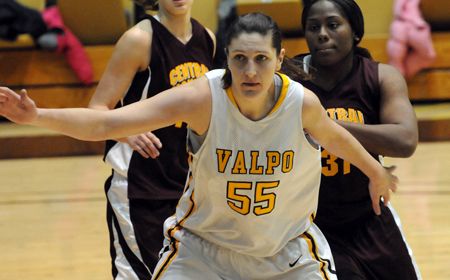 Coming Up in Crusader Hoops: Valparaiso opens the new year on Saturday afternoon returning home to the ARC for the first time in nearly a month as the Crusaders host UIC.  This marks the beginning of the 18-game Horizon League slate for the Brown and Gold, with the Brown and Gold also beginning a brief two-game homestand.

On the Air: Saturday’s game against UIC will be carried live on WVUR (95.1-FM, Valparaiso) and online at valpoathletics.com. Mike Targonski and Chris Kleinhans Shultz will call all the action live from the Athletics-Recreation Center.  The game can also be viewed live on line through the Horizon League Network.  Live stats will be available through www.valpoathletics.com as well.

Series Notes: Valparaiso and UIC are meeting for the 31st time in a series that dates back to 1980.  The Crusaders hold an 18-12 all-time edge and is 11-2 against the Flames in Valparaiso.  Last year the two schools split the season series with Valpo winning 66-64 at the ARC on January 15 before UIC earned a 61-50 win in Chicago on February 14 to snap a seven-game Crusader winning streak in the series.  Valpo has won 11 straight against the Flames at the ARC.

Head Coach Keith Freeman: In his 16th season on the Valparaiso bench, Keith Freeman has a 263-189 record at the helm of the Brown and Gold.  In his 22nd season overall, Freeman has a 392-236 career mark.  He is Valpo’s all-time winningest coach and has amassed more than half of the victories in the program’s history.

Wrapping Up Wake Forest: The Demon Deacons went on a 15-0 run late in the first half to break open a tie ball game and eventually downed the Crusaders 52-34 on Wednesday evening in the consolation game of the San Diego Surf ‘n Slam.  Wake Forest limited Valpo to just 23.8% shooting for the game, including a 17.4% clip in the second half.  Betsy Adams led the Brown and Gold with eight points.

Scouting UIC: The Flames have alternated wins and losses over their last five games and are coming off of a 62-55 setback at Northern Illinois on Tuesday evening.  Jessie Miller leads UIC in scoring averaging 11.8 points per game while Jasmine Bailey adds 9.5 points and 8.0 rebounds per night.  The Flames, picked fourth in the preseason poll, are 1-4 away from home.

Valpo in Horizon League Openers: Valparaiso is a perfect 2-0 in conference openers since joining the league prior to the 2007-2008 season.  The Crusaders have started every league slate at home thus far, having downed Butler in year one 77-69 and Youngstown State last season 86-43.

Varner League’s Player of the Week: Ashley Varner had the best game of her Crusader career a week ago Monday at Cincinnati, scoring a career-high 23 points and for her efforts was named this week’s Horizon League Player of the Week.  The junior made five three-pointers, three more than she had made in any previous game during her three years at Valpo, and also grabbed seven rebounds, a team high.

Richards Has Career Night on the Stat Sheet...: Laura Richards tallied career highs with eight points, seven rebounds, and five assists on Monday evening against Auburn.  The freshman point guard grabbed a huge loose ball rebound after Valpo had a desperation shot as the shot clock expired to keep the play alive and drew a foul, with her free throws giving Valpo its first lead of the game with eight minutes to play.

... and Also Does it on Defense: Not only did Laura Richards perform well on the offensive end of the floor, but played stellar defense throughout the 39 minutes she was on the floor.  The rookie hounded Auburn’s leading scorer, and one of the top shooters in the SEC, Alli Smalley, holding her to just 1-of-12 shooting for the game and just eight points.

Taking Care of the Basketball: Valpo had a season low six turnovers against Auburn, despite the tough defensive pressure by the Tigers.  The Crusaders got back after the few turnovers though, and did not allow them to result in a single point for the game.

Lending a Helping Hand: Valpo had 13 assists on its 18 baskets against the Tigers on Monday night.  Laura Richards dished out five helpers while Whitney Farris and Ashley Varner both registered three each.  With just six turnovers committed, Valpo had more than a 2:1 assist-to-turnover ratio for the game.

Farris Has Season Scoring High: Whitney Farris tallied double figures for the first time this season against Auburn, scoring 12 points to share team-high honors.  The senior also grabbed five rebounds and had three assists while blocking her first shot of the year.

Block Party: Ashley Varner registered three more blocked shots against Auburn, matching a career high, on Monday night.  Her 12 blocks this year have already surpassed her entire total from 2008-2009 and are just two shy of her career total entering this year.  As a team, Valpo has already blocked 31 shots in just 11 games, two-thirds of the team’s total from all of 2008-2009.  Last year the Crusaders finished with just 45 blocks in 30 contests.

Freshmen Duo Among Assist/Turnover Leaders: Valpo’s freshman point guards Skyler Gick and Laura Richards rank fourth and seventh in the Horizon League in assist-to-turnover ratio.  Gick has dished out 31 assists while turning the ball over just 18 times for a 1.7 assist-to-turnover mark while Richards has 22 assists and just 15 turnovers for a 1.5 ratio.

A Perfect Effort: Betsy Adams went a perfect 10-for-10 against Colorado State from the free throw line.  Her performance against the Rams marked the fourth most makes without a miss ever at Valpo.  Ironically, Adams went  just 6-of-10 for the season at the line last year as a freshman.

Kenney Named Horizon League Player of the Week: Lauren Kenney was named the Horizon League’s Player of the Week on November 23 after leading Valpo to wins over SIU Edwardsville and Colorado State.  The senior forward averaged 20.0 points, 13.5 rebounds, and 2.5 steals per game while registering double-doubles in both contests for the Crusaders.