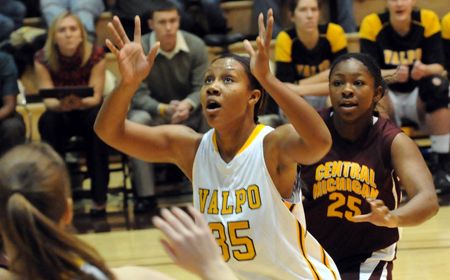 Betsy Adams (Monticello, Ind./Twin Lakes H.S.) scored 16 points, had seven rebounds, and added three steals, but it was not enough as UIC earned a 60-51 victory over Valparaiso on Saturday afternoon in the Horizon League opener for both schools at the Athletics-Recreation Center.

Adams made four triples in 36 minutes, pushing her season scoring average to 13.4 points per game.

“Tonight on the floor there was one player (Adams) who showed cerebralness and mental toughness, and played the way I’d like to see everyone play the game,” head coach Keith Freeman said after the game.

The game started as a low-scoring affair, with an Adams triple at the 8:09 mark giving Valpo a 14-13 lead, starting an 8-0 Crusader run.  Another triple by Whitney Farris (Kokomo, Ind./Kokomo H.S.) followed by a 12-foot jumper by Sylwia Zabielewicz (Warsaw, Poland/Generala Wladyslawa Andersa H.S.) put the Brown and Gold on top 19-13, its largest lead of the game.  UIC fought back, closing within two, 25-23, by intermission.

The Flames took their first lead of the second half with 15:11 to play on a lay-in by Briana Hinkle, but Valpo responded quickly and the two schools traded leads, with the Crusaders tying the game at 46 on a Farris bucket with 6:09 to play.

UIC scored the game’s next nine points over four-and-a-half minutes, building a 55-46 advantage with just 1:33 to play.  The Crusaders would get within five in the final minute, but UIC made four straight free throws in the final 22 seconds to secure the victory.

Adams was the only Crusader in double figures in scoring with her 16 points while Farris added eight.  Kelly Watts (Gary, Ind./East Chicago Central H.S.) pulled down a season-high 10 rebounds to help Valpo to a 33-32 rebounding edge.  She had five on the offensive end of the floor herself, while the Flames tallied just six offensive boards as a team on the night.

UIC shot nearly 46% from the floor though, while Valpo connected on just 34% and committed 21 turnovers.

“We lost the game with sloppy ball-handling, floating passes, and Jasmine Bailey (seven steals), creating offensive from defense,” Freeman added.  “The got 23 points off turnovers, mostly on three-on-twos or two-on-ones.”

Valparaiso (3-9, 0-1) will look for its first Horizon League win on Monday night when the Crusaders host Loyola (Chicago) at the ARC.  Tip-off is slated for 7:05 p.m. with the game televised in the Chicagoland area on Lakeshore Public Television.