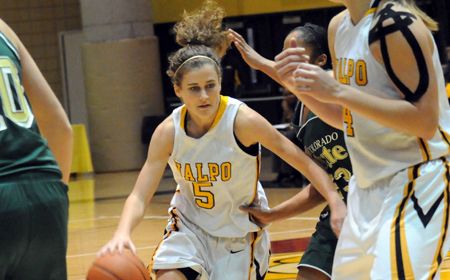 “It’s nice to get a win,” commented head coach Keith Freeman after the game.  “We have to be able to defend and I was really pleased with our effort on the boards and the scrappiness of our kids.”

The Crusaders led from the opening tip, but Loyola was able to pull within one midway through the first half.

Valpo led 9-8 at the 14:01 mark of the first half before both teams went on a scoring drought.  A three-pointer by Betsy Adams (Monticello, Ind./Twin Lakes H.S.) gave Valpo a 13-8 lead, and marked the first field goal by either team in 7:05.

The Ramblers missed 17 straight shots from the floor, and were held scoreless for nearly 11 minutes as Valpo built a 17-8 advantage at the 3:23 mark before taking a 19-12 lead into the locker room.

A three-point play by Adams gave Valpo a 24-16 lead four minutes into the second half before Loyola began to chip away, cutting the lead to one, 30-29, with 8:51 to play after a lay-in by Ellen Ayoub.  The Rambler forward was also fouled, but missed the free throw that gave the visitors a chance to tie.

Valpo then went on a 13-2 run, keyed by five points from Adams and four more from Sylwia Zabielewicz (Warsaw, Poland/Generala Wladyslawa Andersa H.S.) off of the bench, to build its largest lead of the game, 43-31, with just over three minutes to play.

“Sylwia changed the tone of the game,” Freeman added.  “Her defensive presence helped us.”

Laura Richards (Connersville, Ind./Connersville H.S.) made all four of her first throws in the final minute to secure the victory for the Brown and Gold.

Adams led the Crusaders with 16 points while Richards added seven, one off of her season high.  Kelly Watts (Gary, Ind./East Chicago Central H.S.) grabbed a game-high 16 rebounds for the Brown and Gold, leading Valpo to a 54-38 advantage on the glass.  Ashley Varner (South Bend, Ind./Washington H.S.) also pulled down nine caroms for Valpo.

Monica Albano led Loyola (6-7, 0-2 Horizon) with 11 points, eight of which came in the second half, while Keisha Collins scored 10 for the Ramblers.

Loyola finished the game shooting 25.8% from the field while Valpo connected on just 28%, but made 17 more free throws than the Ramblers.

Game Notes: Valpo leads the all-time series with Loyola 15-1 and has won all eight games played at the ARC … the Crusaders have won four straight meetings overall … Adams has made three or more triples in five of Valpo’s six home games this season, making four tonight … Watts’ 16 boards mark a collegiate best for the junior, who grabbed 14 in a game twice at Eastern Michigan … she has back-to-back double figure rebounding games for the first time in her collegiate career … Loyola did not make a free throw in the game … the Ramblers committed just five turnovers … Zabielewicz scored six points and had five boards in just eight minutes.