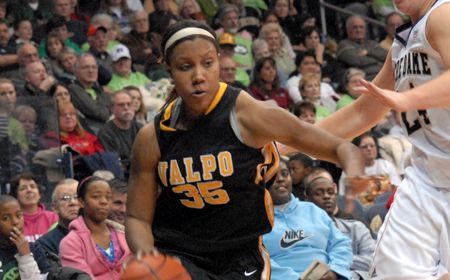 Kelly Watts (Gary, Ind./East Chicago Central H.S.) scored 13 points and grabbed 15 rebounds and Laura Richards (Connersville, Ind./Connersville H.S.) added a career-high 10 points for Valparaiso, but it was not enough as the Crusaders fell on the road 57-43 at Butler on Saturday afternoon in Indianapolis, Ind.

Watts grabbed nine of her boards on the offensive end, and her scoring output was her highest since joining the Brown and Gold.

“Kelly Watts did a great job on the offensive glass,” head coach Keith Freeman said.  “She battled the boards and competed hard today.”

Valpo took its first lead of the game five minutes into the contest as Whitney Farris (Kokomo, Ind./Kokomo H.S.) drilled a triple from long range to put the Crusaders up 7-6.

Trailing by two, Betsy Adams (Monticello, Ind./Twin Lakes H.S.) converted a three-point play following a lay-in, and Watts followed with a basketball inside to make it 14-11 Valpo at the 8:01 mark.

The Crusaders would not score for the next five minutes though, and Butler went on a 10-0 run to take a seven-point lead.  Valpo fought back, with a Watts put-back of a missed free throw, her ninth rebound of the half and fifth offensive board, bringing the Crusaders within 21-20 with just over a minute to play before the break.

Butler answered with back-to-back three-pointers by Brittany Bowen and Susan Lester right before intermission to take a 27-20 lead into the break.

“The first 19 minutes of the game we did a great job defensively, but then we gave up those two threes before half,” Freeman added.

The Bulldogs extended the lead to 11, 33-22, scoring six of the first eight points out of the locker room, and the lead fluctuated between nine and 11 until Melanie Thornton scored 11 straight points for Butler to push the lead to 48-30 with nine minutes to play.

The Crusaders were able to claw back within 12, 52-40, with 2:28 to play following back-to-back baskets by Watts, but would not get any closer the rest of the way.

“I thought Thornton was the difference in the second half,” Freeman added.  “We had a hard time controlling her and Bowen.”

Valpo finished the game shooting 30.5% from the floor, and was just 1-of-15 from three-point range while Butler connected on 50% from the field in the second half to finish shooting 43.1% for the game.  The Bulldogs held a slim 40-39 advantage on the boards, with Valpo outrebounding Butler 17-13 on the offensive end.

“We need to continue to improve defensively,” concluded Freeman.  “But more importantly we need to find ways for easy scores on offense.”

Valparaiso (4-10, 1-2) will continue its three-game road trip on Thursday evening as the Crusaders head to Youngstown, Ohio to battle the Penguins of Youngstown State.  Tip-off is set for 6:05 p.m. CST live at the Beeghley Center.

Game Notes: The 57 points allowed by the Crusaders represents the fewest Butler has scored in a game this season … Butler lead the all-time series 17-5 and 9-1 at Hinkle Fieldhouse … Watts has tallied double-figure rebounds in three straight games and notched her first double-double as a Crusader … Valpo registered five blocked shots for the game, including three by Ashley Varner (South Bend, Ind./Washington H.S.).