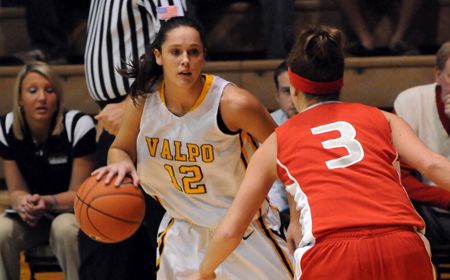 Coming Up in Crusader Hoops: Valparaiso heads east to Ohio for a pair of games beginning on Thursday evening when the Crusaders face Youngstown State.  Valpo is looking for its first road win of the year in the middle game of its three-game road trip.

On the Air: Thursday’s game against Youngstown State will be carried live on WVUR (95.1-FM, Valparaiso) and online at valpoathletics.com. Keaton Gillogly and Chris Kleinhans Shultz will call all the action live from the Beeghly Center.  The game can also be viewed live online through the Horizon League Network.  Live stats will be available through www.valpoathletics.com as well.

Series Notes: Valparaiso and Youngstown State are meeting for the 26th time in a series that dates back to 1993 when the two schools were both members of the Mid-Continent Conference.  The Penguins hold a slight advantage all-time, 14-11, after the two schools split a pair of meetings last year.  Valpo was an 86-43 victor at the ARC on January 3 while Youngstown State won in Ohio 54-38 on March 7 to close the regular season.  The Penguins lead the all-time series in Youngstown 8-3.

Head Coach Keith Freeman: In his 16th season on the Valparaiso bench, Keith Freeman has a 264-191 record at the helm of the Brown and Gold.  In his 22nd season overall, Freeman has a 393-238 career mark.  He is Valpo’s all-time winningest coach and has amassed more than half of the victories in the program’s history.

Wrapping Up Butler: The Crusaders held Butler to its lowest point total of the season on Saturday afternoon, but shot just 31% themselves and fell to the Bulldogs 57-43 in Indianapolis.  Kelly Watts led Valpo with 13 points and 15 rebounds while Laura Richards added 10 points for the Brown and Gold.  Valpo struggled from long range, making just 1-of-15 from beyond the arc.

Scouting Youngstown State: The Penguins are still looking for their first victory of the season following a 75-49 loss at Loyola on Saturday.  Bojana Dimitrov and Brandi Brown lead the offense averaging 12.8 and 11.9 points per game respectively with Brown also pulling down 10.9 rebounds per contest.  The Penguins are -24 in scoring differential and -10.4 in rebounding this season.

Watts a Force on the Glass in League Play: Since Horizon League play has begun Kelly Watts has been crashing the glass hard.  The junior is averaging 13.7 rebounds per contest over the three games thus far, all double figure efforts.  Watts pulled down 15 boards on Saturday at Butler after grabbing a career-best 16 against Loyola (Chicago) and 10 versus UIC.  Seventeen of her 41 league boards have come on the offensive end (5.7 per game), including nine at Butler.

Duo Has Career Scoring Night: Kelly Watts and Laura Richards each had their highest scoring game since putting on a Valpo uniform Saturday at Butler.  Watts tallied a team-high 13 points to post her first double-double with the Brown and Gold after grabbing 15 rebounds as well.  Richards added her first double figure scoring game of her collegiate career with 10 points on 5-of-7 shooting.

Adams League’s Top Free Throw Shooter: Betsy Adams leads the Horizon League and ranks 18th nationally in free throw shooting connecting on 88.4% of her attempts on the season. The sophomore is 38-of-43 from the charity stripe.

Not Allowing Charity: Over the last two games, Valpo has allowed its opponents just seven free throw attempts total against Loyola (Chicago) and Butler, with just two charity tosses being made.  The Ramblers went 0-for-2 against the Crusaders from the free throw line while Butler was just 2-of-5.

Varner Consistent on the Glass: Ashley Varner leads the Crusaders in rebounding on the season, averaging 6.5 boards per game, seventh best in the Horizon League.  The junior has grabbed at least five rebounds in 11 of the 14 games this season.

Struggling to Find Offense: Valpo has had trouble scoring over the last eight games, averaging just 46.9 points per contest since December 8.  The Crusaders have not scored more than 52 points in a game during the span.

Block Party: Ashley Varner registered three more blocked shots at Butler, matching a career high for the third time this year.  Her 15 blocks this year have already surpassed her career total of 14 entering this year.  As a team, Valpo has already blocked 36 shots in just 15 games, just nine shy of the team’s total from all of 2008-2009.  Last year the Crusaders finished with just 45 blocks in 30 contests.

Keeping Them Off the Scoreboard: Valpo allowed just 39 points against Loyola (Chicago) on January 4, matching the sixth fewest points ever allowed by a Crusader team in the 39th year of the program’s existence.  The 39 points were the fewest allowed since the team set the school record of 31 on December 30, 2005 against UMKC.

A Perfect Effort: Betsy Adams went a perfect 10-for-10 against Colorado State from the free throw line.  Her performance against the Rams marked the fourth most makes without a miss ever at Valpo.  Ironically, Adams went  just 6-of-10 for the season at the line last year as a freshman.

Horizon League Player of the Weeks: Lauren Kenney was named the Horizon League’s Player of the Week on November 23 after leading Valpo to wins over SIU Edwardsville and Colorado State.  The senior forward averaged 20.0 points, 13.5 rebounds, and 2.5 steals per game while registering double-doubles in both contests for the Crusaders.  Ashley Varner then earned the honor on December 28 after scoring a career-high 23 points against Cincinnati.  The junior made five three-pointers, three more than she had made in any previous game during her three years at Valpo, and also grabbed seven rebounds, a team high.