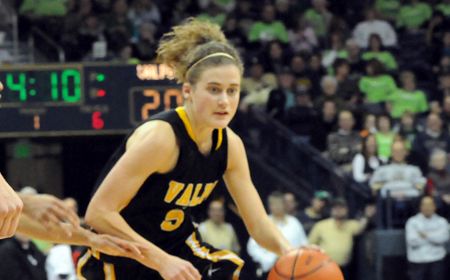 A 25-4 run spanning both halves helped Valparaiso rally from a early 13-point deficit to defeat Youngstown State 66-41 on Thursday evening at the Beeghly Center in Youngstown, Ohio for the Crusaders’ first road victory during the 2009-2010 campaign.

Betsy Adams (Monticello, Ind./Twin Lakes H.S.) scored 18 of her career-high 25 points during the run and Valpo’s offense exploded in the second half shooting 65% (20-of-31) from the floor.

“Betsy did a great job making open shots,” head coach Keith Freeman said.  “When they came out and guarded her she did a good job taking it to the basket.”

Youngstown State started with the hot hand from the floor, making five of its first six shots to take an early 12-5 lead four minutes into the contest.

Crusader turnovers aided the Penguins’ cause, as 10 miscues allowed the hosts to expand the lead to 22-9 with 6:12 to play before intermission.

Adams helped bring the Crusaders back before halftime.  Two straight triples cut the deficit to 24-17 with just over four minutes to play before the break, and her third triple of the stanza in the final minute closed the gap to four, 26-22, heading into the locker room.

Valpo committed 13 first half turnovers, leading to 12 Penguin points, while shooting just 30% (7-of-23) from the floor in the opening 20 minutes.  Youngstown State connected on 35%, but was 0-of-7 from long range at the break.

The Crusaders scored the first two baskets of the second half to tie the game and Adams followed with a triple to give Valpo its first lead of the game, 29-26, with 18:15 to play.  Ashley Varner (South Bend, Ind./Washington H.S.) followed with a triple to continue the momentum and Adams added two more to cap a 17-0 spurt, part of a 25-4 run over the two halves, pushing the advantage to 34-26 five minutes into the period.

The lead continued to extend throughout the second half as Valpo finished the game with a 51-19 run after trailing by 13.

Adams made 10-of-15 from the floor, including 5-of-8 from three point range to lead three Crusaders in double figures.  Lauren Kenney (Mooresville, Ind./Mooresville H.S.) added 14 points, 12 in the second half, making 7-of-8 from the floor while Varner tallied 10 points.

“I thought in the second half we played very physical, got to loose balls, and played a lot better defensively,” Freeman added.  “The kids did a good job moving the basketball.”

Kenya Middlebrooks led Youngstown State (0-16, 0-5 Horizon) with 15 points and eight rebounds as the Penguins shot just 21% in the second half and finished the game just 28%, including 1-of-12 from three-point range.

“Anytime we go on the road, shoot well, and play hard, it is a positive,” concluded Freeman.

Valparaiso (5-10, 2-2) will conclude its three-game road trip on Saturday afternoon as the Crusaders head to Cleveland, Ohio to battle the Vikings of Cleveland State.  Tip-off is set for 2 p.m. CST.