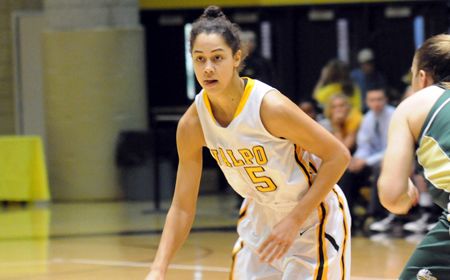 Led by a balanced scoring attack which saw five Crusaders score in double figures, Valparaiso closed out the home portion of the regular season on Saturday afternoon with a 70-58 victory over Milwaukee on Senior Day at the Athletics-Recreation Center.

“Raegan was able to get back into her rhythm after the injury,” head coach Keith Freeman said.

Trailing 9-4 early in the first half, Valpo ran off eight straight points, capped by a triple from Moore, to take its first lead of the game at the 13:00 mark.

The game stayed tight until a 13-1 Crusader run over three minutes, including seven points by Varner, gave Valpo a 29-18 lead with 16:16 to play before the break.

Milwaukee closed to within 38-30 at halftime.  Valpo shot 50% from the floor and was 5-of-12 from long range in the first half to offset 10 offensive boards by the Panthers which led to 10 second chance points.

Valpo struggled to score coming out of halftime, missing its first nine shots and allowing the Panthers to cut the lead to 39-34 at the 15:46 mark, the closest Milwaukee would get in the second half.

The Crusaders pushed the lead back to 11 before the visitors made one late run, closing to within six with five minutes to play.  A Varner rebound and putback stopped the momentum and allowed Valpo to rebuild its lead for the stretch run.

“Varner made a big play with her putback and basket,” Freeman said.  “I liked how she came off the bench and provided us with a spark today.”

Valpo made 10-of-12 free throws down the stretch to secure the win.

“Watts did a good job running the floor and getting in the low post,” Freeman said.  “Whitney did a nice job defensively cutting off the baseline and being physical while Rashida Ray did a good job off of the bench to give us a boost.”

Valpo was able to offset 28.1% shooting in the second half by forcing 22 turnovers by Milwaukee in the game, including 12 in the final 20 minutes.  Fifteen of the turnovers came by way of steals, including a career-high for Farris on Senior Day.

“Our ability to press led to the 13-turnover advantage we had,” Freeman said as Valpo made just nine on the afternoon.

Valpo outscored Milwaukee 51-22 off of the bench and held Milwaukee to just 35.7% shooting, including just 1-of-11 from three-point range in the first half.

Valparaiso (8-19, 5-11) has now moved into a tie with Milwaukee for eighth place in the Horizon League standings, and will head to the Windy City for a pair of games next weekend to wrap up the regular season.  The road trip begins on Thursday as the Crusaders take on Loyola (Chicago) with tip-off slated for 7 p.m.