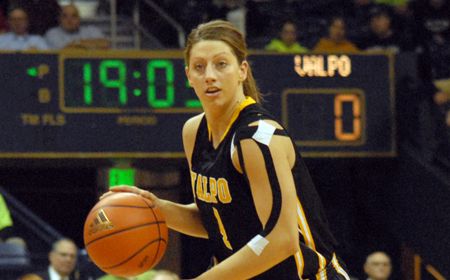 Coming Up in Crusader Hoops: Valparaiso wraps up the 2009-2010 regular season on Saturday afternoon in the Windy City as the Crusaders battle UIC.  The Brown and Gold still have a chance to host a first round Horizon League Tournament game on Monday evening with a win and some help.

On the Air: Saturday’s game against UIC will be carried live on WVUR (95.1-FM, Valparaiso) and online at valpoathletics.com. Mike Targonski and Chris Kleinhans Shultz will call all the action from the UIC Pavilion.  The game can also be viewed live online through the Horizon League Network.  Live stats will be available through www.valpoathletics.com as well.

Series Notes: Valparaiso and UIC are meeting for the 32nd time in a series that dates back to December 4, 1980, a 70-64 Flames victory in Valpo.  The Crusaders lead the all-time series 18-13, but UIC has won two straight following a 60-51 win at the ARC back on January 2 of this season.  The Flames hold an 8-6 advantage in the Windy City after a 61-50 victory last year, snapping a three-game Valpo winning streak in Chicago.

Head Coach Keith Freeman: In his 16th season on the Valparaiso bench, Keith Freeman has a 268-201 record at the helm of the Brown and Gold.  In his 22nd season overall, Freeman has a 397-248 career mark.  He is Valpo’s all-time winningest coach and has amassed more than half of the victories in the program’s history.

Wrapping Up Loyola: Katie Kortekamp hit a game-winning three-pointer with 8.9 seconds to play to lift the Ramblers to a 62-61 victory over Valpo on Thursday night in Chicago.  Valpo trailed by 11 points early in the second half, fought back, and had a five-point lead in the final 50 seconds before Loyola hit back-to-back three-pointers.  Lauren Kenney led Valpo with 18 points off of the bench while Ashley Varner and Whitney Farris had 15 points each.  Varner also grabbed nine rebounds.

Scouting UIC: The Flames have dropped four of their last five games following a 64-59 setback against Butler at home on Thursday night.  Jessie Miller leads UIC in scoring, averaging 13.6 points per game, seventh in the conference.  Jasmine Bailey adds 11.3 points per contest, while grabbing 8.2 rebounds per game, fourth best in the league.  As a team, UIC leads the Horizon League blocking 4.8 shots per night.

The First Time Around: A 9-0 run late in the game put the Flames in front for good as UIC defeated Valpo 60-51 on January 2 at the ARC in the Horizon League opener.  Betsy Adams led the Crusaders with 18 points, making four triples.  Jessie Miller went 9-of-13 from the floor to score 23 points while Briana Hinkle added 15 more for UIC.

Need a Win and Help:  Valpo is guaranteed to face Milwaukee on Monday evening in the #8/9 game of the Horizon League Championships.  Where that game will be played has yet to be determined.  For Valpo to host the contest, the Crusaders must defeat UIC and then have either Youngstown State defeat Milwaukee or Detroit down Wright State.  A Crusader loss and the game will be held in Wisconsin for sure.

Continuing the Winning Ways at the ARC: With the victory over Milwaukee last Saturday, Valparaiso is guaranteed of finishing at least .500 at home for the ninth consecutive season.  In fact, the Crusaders have had a winning record at the ARC for 19 of the last 20 years.

Farris Continues to Produce: Whitney Farris scored 15 points at Loyola (Chicago) on Thursday evening for her fifth consecutive double figure scoring effort.  The senior is averaging 13.6 points per game during the span, including a career-high 22 points at Wright State on February 18.  Farris, who had never made more than two triples in a game prior to Thursday connected on four long balls against the Ramblers.

Varner Crashes the Boards: Ashley Varner pulled down a career-high six offensive rebounds at Loyola (Chicago) on her way to nine total boards.  Her putback attempts helped her score 15 points for the Brown and Gold.

Who’s Starting Tonight?: Valpo has seen 10 of its 13 players draw at least two starting assignments on the season, with no one starting more than 26 of the 28 games this year for the Brown and Gold.  In fact, only Ashley Varner, Whitney Farris, and Laura Richards have seen action in all 28 games on the season.

Kenney Makes Shots: Lauren Kenney ranks second in the Horizon League shooting 55.9% from the floor this season.  Her shooting percentage currently ranks sixth on Valpo’s single season charts, behind Sarrah Stricklett’s fifth place mark of 56.3%.  Kenney’s 2008-2009 percentage of 54.4% is seventh on the all-time list as well.

Adams in Single Season Top-10: Betsy Adams has moved into 10th place on Valpo’s single season three-point list with 60 triples this season.  The sophomore guard has passed Michelle Russell (1993-1994) and is five treys behind Suzie Hammel (2001-2002) for ninth place on the single season list.

A Record-Setting Afternoon: Valparaiso held Youngstown State to a record-low for points allowed in a game, surrendering just 28 points against the Penguins on February 13.  Earlier this season, on January 4, Valpo matched what is now the seventh fewest points ever allowed by a Crusader team, 39, against Loyola (Chicago).

Nearly a Record Victory Margin as Well: The 52-point margin of victory against Youngstown State on February 13 was the second largest in school history.  On February 1, 1978 Valpo defeated Grace on the road by 54 points, 88-34.

A Perfect Effort: Betsy Adams went a perfect 10-for-10 against Colorado State from the free throw line.  Her performance against the Rams marked the fourth most makes without a miss ever at Valpo.

Horizon League Player of the Weeks: Lauren Kenney was named the Horizon League’s Player of the Week on November 23 after leading Valpo to wins over SIU Edwardsville and Colorado State.  The senior forward averaged 20.0 points, 13.5 rebounds, and 2.5 steals per game while registering double-doubles in both contests for the Crusaders.  Ashley Varner then earned the honor on December 28 after scoring a career-high 23 points against Cincinnati.