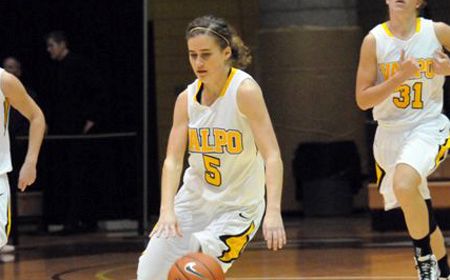 An 11-0 run late in the second half broke the game open on Saturday afternoon as Lamar upended Valparaiso 74-58 in the Crusaders’ final  game of the Preseason WNIT held in Beaumont, Texas.

Betsy Adams (Monticello, Ind./Twin Lakes H.S.) led the Crusaders for the third straight time with 15 points, 13 of which came in the first half, while Ashley Timmerman (Pontiac, Ill./Pontiac H.S.) added 10 points for the Brown and Gold.

“I thought had a good trip overall for us,” head coach Keith Freeman said.  “We got a win (against Austin Peay on Friday) and played quality teams.  All three teams we have played so far were NCAA Tournament teams last year.”

The first half was closely contested throughout.  Valpo utilized balanced scoring early, as the first 11 Crusader points were score by five different players.

Lamar built a 22-16 lead with 8:14 to play before intermission before the Crusaders dialed warmed up from long range.  A three-pointer by Timmerman followed by a put back from Gina Lange (Wyoming, Minn./Forest Lake H.S.) cut the deficit to  one.

Following a Cardinal basket, Adams tied the game at 24 with a triple of her own.  A Tabitha Gerardot (Fort Wayne, Ind./Canterbury H.S.) three gave Valpo a 27-26 lead with 3:27 to play before intermission and another Adams trey, her third of the first half, helped the Crusaders go into the locker room tied at 30.

After the teams traded baskets to start the second half, Lamar scored 10 straight points over a 1:45 span to build a 42-32 lead, an advantage the Cardinals would not relinquish the rest of the way.

The Crusaders tried to fight back, cutting the deficit to 42-38 with 14:01 to play as Timmerman stole the ball and went coast to coast for the basket.  A lay-in by Lange followed to close within two, but that would be as close as Valpo could get the rest of the way.

The Cardinal lead stayed between four and eight until the 9:15 mark when the Crusaders went cold from the floor.  With Lamar up 55-51, the Cardinals went on an 11-0 run, holding Valpo scoreless for more than five minutes, and pushing the advantage to 15 points.

The Crusaders managed just seven points the rest of the way, falling for the second time in the tournament.

“We did a nice job for the first 30 minutes of the game,” Freeman said.  “They had a stretch were their lead got to 8-10 points and we tried to play faster than we can play.”

Valpo committed 22 turnovers in the contest, and was outrebounded 41-32, giving up 18 boards on the offensive glass.  Lange led the Crusaders on the glass with a career high eight rebounds, and also matched her career best with eight points.

“They are a good team,” Freeman concluded.  “Their point guard (Plumley) is a different player to play against.”

Valparaiso will return to the Athletics-Recreation Center for the 2010-2011 home opener on Wednesday evening as the Crusaders host instate rival Ball State.  Tip-off is set for 7:05 p.m.

Game Notes: This was the first meeting ever between Valpo and Lamar … Adams has scored in double figures in all three games this season … Maegan Callaway (Mooresville, Ind./Mooresville H.S.) scored seven points for the second straight game in just six minutes of action … Lamar has won 15 straight games at home and has not lost at Montague Center since March, 2009.