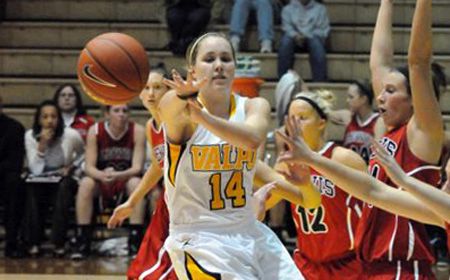 For 20 minutes Valparaiso hung with Cincinnati on Sunday afternoon.  However, for the Crusaders, it happened to be the second half after a cold shooting first stanza as the Bearcats defeated Valpo 65-51 at the Athletics-Recreation Center.

“I still believe in these kids,” head coach Keith Freeman said.  “We have great chemistry and I think they will continue to work on their game to become a good team.  It just takes time.”

Valpo shot just 29.2% in the first half, falling behind 31-17 at the break before making a run at Cincinnati.  A 13-3 run over the first five-and-a-half minutes out of the locker room pulled the Crusaders within four, 34-30.  Rashida Ray (Fort Wayne, Ind./Harding H.S.) scored seven points during the spurt, beginning and ending the run with three-pointers.

The Bearcats responded though, making five of their first six three-point attempts of the second half, including four during an 18-3 run that broke the game back open, and gave Cincinnati a 52-33 lead with 11 minutes to play in the game.

The lead never got larger than 19 for Cincinnati, but Valpo never managed to cut the deficit below 13 the rest of the way.

Cincinnati (5-0) jumped out top quickly, scoring the game’s first nine points.  The Bearcats slowly increased the lead to 14, 24-10, with four minutes to play in the half, and eventually to as many as 17 before taking the 14 point lead into the locker room.

“In the first half we passed up very good shots in order to drive into traffic and created less desirable shots,” Freeman said.  “In the second half we were much better.  Tabitha (Gerardot) was much better in her approach to playing.”

Tabitha Gerardot (Fort Wayne, Ind./Canterbury H.S.) recorded her first collegiate double-double for the Crusaders, scoring all 10 of her points in the second half while adding 10 rebounds, seven in the final 20 minutes.  She pulled down five offensive rebounds as the Brown and Gold had 17 second chance opportunities in the game.

“On a positive note, there have been two areas we have not been so good in coming in, rebounding and turning the ball over” Freeman added.  “Today we did a much better job in both areas.  The fact we had 17 offensive boards shows we were aggressive and we committed just 11 turnovers.”

Valparaiso (1-4) will return to the hardwood on Friday evening as the Crusaders face host Evansville in the first round of the Dunn Hospitality/UE Winter Classic.  Tip-off is set for approximately 7:30 p.m. in Evansville, Ind.