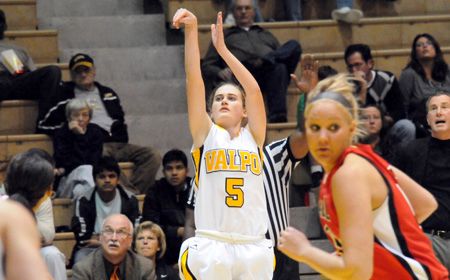 Betsy Adams (Monticello, Ind./Twin Lakes H.S.) drained a three-pointer with 22.6 seconds remaining to tie  the game for Valparaiso on Friday evening, but Evansville’s Briyana Blair scored the game-winning basket with 1.1 seconds to play as the Purple Aces defeated the Crusaders 69-67 at Roberts Stadium in Evansville, Ind. in the opening round of the Aces Classic.

Adams game-tying basket, and final three points of her 22-point evening, came on a third shot opportunity following an offensive rebound from Tabitha Gerardot (Fort Wayne, Ind./Canterbury H.S.), who had her second consecutive double-double with 17 points and 13 rebounds on the night.  The sophomore hit her fourth three of the night, this one from 21 feet with a hand in her face to cap a Crusader rally which saw Valpo trailing by six with five minutes to play.

“I was pleased that when we were down six with six minutes to play, we really battled those last six minutes,” head coach Keith Freeman said.  “We kept the game fairly close throughout.  It was one to two possessions most of the way.”

Following an Evansville timeout, Blair then drove the lane and scored off glass as the clock was winding down.

“An advantage they may have had was that they have had three games decided at the wire already this year coming into tonight,” Freeman added.  “They knew what they wanted to do and our young kids are still finding their way.”

Valpo jumped out front quickly behind the shooting of Adams.  The junior guard hit her first four shots and scored nine of Valpo’s first 16 points as the Crusaders built a 16-7 lead just over five minutes into the game.

Evansville fought back, cutting the Crusader lead to 18-14 at the 12:40 mark on a three-pointer from Meagan Collins.  Valpo’s sharp shooting early continued though, as an Ashley Timmerman (Pontiac, Ill./Pontiac H.S.) triple gave the Crusaders 23-18 lead and capped a 9-of-10 shooting start for the Brown and Gold.

Turnovers plagued the Crusaders in the first half though, and allowed the Purple Aces to get back into the contest.  Eight Valpo miscues led to 10 points in the first 10 minutes and allowed Evansville to take the lead 24-23.

The half remained tight the rest of the way, and an Adams bucket in the final minute pulled Valpo within 38-36 at the break.

Adams had 14 points on 6-of-9 shooting during the opening 20 minutes while Gerardot had seven points and seven rebounds in the first half.

Valpo shot 53.8% from the floor in the first half, but made just four of its final 14 shots in the stanza.  The Crusaders also finished with 13 turnovers while Evansville committed just three despite shooting just 36.1% from the field.

The Crusaders came out of the locker room and retook the lead with eight straight points.  Three-pointers by Laura RichardsGina Lange (Connersville, Ind./Connersville H.S.) and (Wyoming, Minn./Forest Lake H.S.) helped Valpo to the 44-38 advantage.

Evansville fought right back, scoring eight straight points to retake the lead 46-44 before another Adams triple ended the run.

A 7-0 run by the Purple Aces put Evansville back in front 58-55 at the 7:27 mark after a three-pointer by Samantha Heck.

Evansville increased the lead to 65-59 with less than five minutes to play before a Lange put back and a basket by Gerardot pulled Valpo back within two with three minutes remaining.

A second chance basket by Chelsea Falkenstein with 56.9 seconds to play put the Purple Aces up four before Skyler Gick (Otterbein, Ind./Benton Central H.S.) made one of two free throws eight seconds later, setting the stage for the final seconds.

Besides leading everyone in scoring with her 22 points, Adams also grabbed eight rebounds.  Lange helped Gerardot inside, tallying a career-high 11 points and pulling down eight boards.

“Our two inside kids played well tonight,” Freeman concluded.  “Betsy Adams played on heck of a game.  Statistically we outrebounded them and outscored them in the paint, but we need to handle the ball better.  There were some positives tonight but the bottom line is we didn’t get the win.”

Blair led Evansville (4-2) off of the bench with 17 points while Heck added 16 points and a team-high seven rebounds.  Stephanie Bamberger also scored 15 points for Evansville.

Valpo outrebounded the Purple Aces 46-34 but committed 20 turnovers to Evansville’s 10 on the night.

Valparaiso (1-5) will return to the court in Evansville on Saturday afternoon as the Crusaders face Coastal Carolina in the consolation game of the Aces Classic.  Central Michigan defeated the Chanticleers 96-42 in the other first round match up on Friday.  Tip-off is set for 1 p.m.

Game Notes: It took Adams just 14 minutes to score in double figures after being held scoreless last game against Cincinnati … Adams has now tallied double figures in five of six games this year … Adams’ 22 points marked a season high … Gerardot’s scoring and rebounding marks were both career bests … the freshman is averaging 13.5 points and 11.5 rebounds per game over the last two contests … Lange’s 11-point effort is her first career game scoring in double figures … Evansville leads the all-time series 6-5 and has won two straight meetings … this was the first time the two instate schools have met since Dec. 12, 1998.