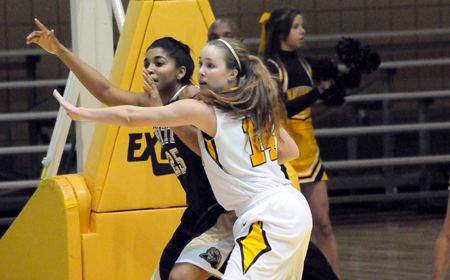 Tabitha Gerardot (Fort Wayne, Ind./Canterbury H.S.) was the lone Crusader to score in double figures on Saturday afternoon as Valparaiso dropped an 86-51 contest to Pittsburgh at the Athletics-Recreation Center.

Gerardot tallied 15 points on 5-of-9 shooting from the floor for her sixth double-figure scoring effort of the season while Skyler Gick (Otterbein, Ind./Benton Central H.S.) finished with six assists, one off of her career high.

“Several people did some good things for us within the game,” head coach Keith Freeman said.  “Tabitha did a pretty good job playing within herself and Skyler did a good job running the offense.”

Valpo fell behind earlier and could never recover.  The Panthers scored the game’s first eight points and led by as many as 11 before an 8-2 Crusader run pulled Valpo within 21-16 following an Ashley Timmerman (Pontiac, Ill./Pontiac H.S.) three-pointer with 9:55 to play in the first half.

Pittsburgh closed the first half scoring 22 of the last 29 points though, and took a 43-23 lead into the locker room.

Valpo was never able to cut the deficit under 20 in the second half, and fell to a Big East team for the third time this season.

The Crusaders shot just 32.8% from the floor while Pittsburgh connected on 48.0% for the game.  The Panthers outscored Valpo 46-22 in the paint and outrebounded the Brown and Gold by 30, 58-28.  Pittsburgh had 24 offensive rebounds leading to 21 second chance points.

“We just got annihilated on the boards,” Freeman added.  “That happens when you play teams like this.”

Leeza Burdgess paced Pitt (5-4) with 16 points and 11 rebounds off of the bench while Chelsea Cole also had a double-double with 12 points and 11 boards.  Five Panthers finished the game in double figures.

“I thought we had a few positives,” Freeman concluded.  “We ran better offense the second half, had some flow, and got some movement.  It is a difficult thing to simulate that pace of play in practice.”

Valparaiso (2-7) will have a week off for final exams before remaining at home next Saturday afternoon as the Crusaders host Chicago State.  Tip-off is set for 1:35 p.m. at the ARC.

Game Notes: Gerardot led Valpo in scoring for the second time in her career … Valpo shot just 42.9% (6-of-14) from the free throw line … this was the second meeting ever between the two schools, with Pitt also winning last year … the Crusaders have never defeated a Big East team in school history.