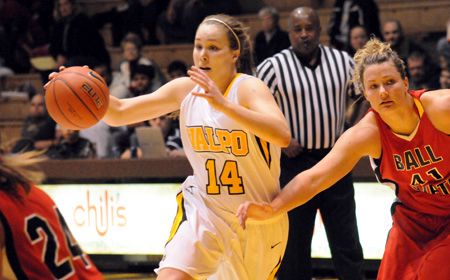 Gerardot matched her career-high with 17 points and pulled down 10 rebounds while playing 38 minutes and Adams connected four times from three-point range for the Crusaders.

Chicago State rallied from a 13-point second half deficit though, and scored the game’s final eight points over the final 3:29 to earn its first win ever at the ARC.

“I’m terribly disappointed in our defense,” head coach Keith Freeman said.  “When we score 67 points we need to win the game.  It comes down to two things: one, our inability to box out and two, us taking care of the basketball.”

Early on it was the Crusaders that fought back from a deficit of its own as the Cougars raced out to a 14-6 lead just six minutes into the game.  Back-to-back triples by Gerardot and Adams helped pull Valpo within two and the Crusaders eventually tied the game at 20 on a layup by Laura Richards (Connersville, Ind./Connersville H.S.).

The Cougars retook the lead heading down the stretch of the first half, but an Adams triple at the buzzer tied the game for the fifth time, this time at 31 heading into the break.

Valpo came out on fire the first six minutes of the second half, scoring 19 of the first 25 points to take a 50-37 lead with 14:03 to play in the contest.  Gerardot scored nine of her 17 points during the run.

“I thought we did a good job coming out at halftime ready to play,” Freeman added.  “Rashida Ray (Fort Wayne, Ind./Harding H.S.) did a good job early in that second half making good decisions and scoring a couple of baskets.”

Back-to-back threes by Janay Dockery and Tressa Beckel helped pull the Cougars within five though, 50-45 with just under 11 minutes to play, and the game was tight the rest of the way.

A Dockery three tied the game at 67 at the 3:29 mark and her two free throws put Chicago State on top a possession later.

Neither team scored for nearly three minutes, and the Crusaders had a chance to tie in the final 30 seconds, but an Adams floater rimmed out and Valpo was forced to foul.

Gina Lange (Wyoming, Minn./Forest Lake H.S.) added nine points for the Crusaders, but was in foul trouble in the second half before fouling out with 2:11 to play, while Richards dished out eight assists on the afternoon.

“With Gina picking up her fourth foul, she was not on the floor to guard Beckel for a period of time and Beckel caused us some problems during that stretch,” Freeman added.

Beckel led Chicago State (4-6) with 18 points and nine rebounds while Courtney Waldon added 16 points and five assists.  Dockery had 15 points and eight boards as well for the Cougars.

Valpo committed 16 turnovers on the afternoon, including 10 in the first half and was outrebounded by the Cougars 44-39.

“I think part of it is it is sloppy play,” Freeman concluded.  “We as a team have to be tougher with the ball and in boxing out.”

Valparaiso (2-8) will close out its three game homestand on Monday evening, hosting #17/16 Notre Dame at the ARC.  Tip-off is set for 7:05 p.m. on Pack the House night.  The first 500 fans will receive a free Valpo beanie hat.

Game Notes: Gerardot now has four double-doubles during her freshman campaign … she led the Crusaders in scoring for the third time this year and the second straight game … Gerardot made 8-of-10 from the free throw line … Richards’ eight assists matched a career high set earlier this season against Coastal Carolina … Ray finished the game with seven points, matching her season high set against Cincinnati … Valpo shot 42.9% (6-of-14) from three-point range … the Cougars scored 21 points off of Valpo’s 16 turnovers … Valpo leads the all-time series 34-6 but the Cougars have won two straight meetings.