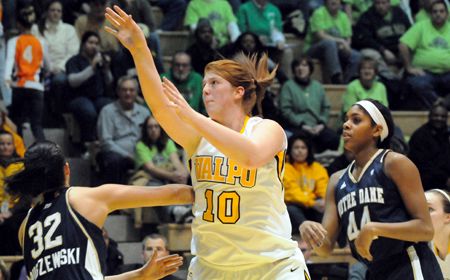 Notre Dame made 14 of its first 16 shots from the floor and proved to be too much for Valparaiso on Monday evening as the #17/16 Fighting Irish defeated the Crusaders 94-43 in front of 1,877 fans at the Athletics-Recreation Center.

“Notre Dame is as deep as they have ever been,” head coach Keith Freeman said.  They have lots of people who know how to play basketball and have lots of skill.  It’s hard to take away their inside and outside game with their ability to pass.”

The Irish forced 26 Crusader turnovers, 24 of which came on steals, and converted the miscues into 41 points as the visitors never trailed in the contest.

“I was disappointed our guards got the ball taken from them by their posts on hedge outs,” Freeman added.  “In the past when we played them close our guards were good enough to control the ball.  Right now we just don’t have that.”

With the game tied at two, Notre Dame (9-3) went on an 18-2 run to build a 16-point advantage just eight minutes into the game before eventually taking a 49-23 lead into the locker room.

Valpo was never able to cut into the lead in the second half while falling to its fourth Big East Conference foe of the season.

Stefanie Lang (Valparaiso, Ind./Valparaiso H.S.) led the Crusaders with a career-high 11 points, making five-of-seven shots from the floor.  She was the only Valpo player to crack double figures.  Rashida Ray (Fort Wayne, Ind./Harding H.S.) and Skyler Gick (Otterbein, Ind./Benton Central H.S.) both added six points for the Crusaders, as the Brown and Gold shot 32.1% from the floor, including just 23.8% from beyond the arc.

“When we shot quickly we couldn’t get back and set up our defense,” Freeman concluded.

Valparaiso (2-9) will take 10 days off before closing the non-conference portion of the schedule on Dec. 30 in Charleston, Ill. when the Crusaders face Eastern Illinois.  Tip-off is set for 7 p.m.

Game Notes: Stephanie Lang’s previous career best was 10 points against DePaul in the season opener … Valpo shot just four free throws while Notre Dame went to the line 24 times … Erika Lang (Las Vegas, Nev./Arbor View H.S.) made her collegiate debut for the Crusaders … the crowd of 1,877 on “Pack the House” night was Valpo’s largest since hosting Notre Dame on Dec. 13, 2008 when 2,046 were on hand … Notre Dame has won all 24 meetings between the two schools.