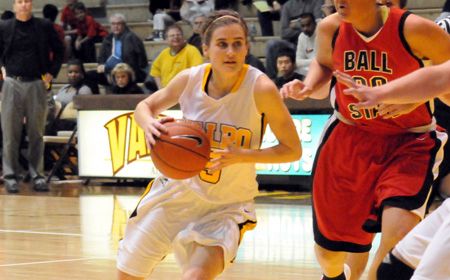 Valparaiso closed out the non-conference portion of the schedule on Thursday evening with a 65-58 road victory over defending Ohio Valley Conference champion Eastern Illinois at Lantz Arena in Charleston, Ill.

Betsy Adams (Monticello, Ind./Twin Lakes H.S.) scored 20 points and Tabitha Gerardot (Fort Wayne, Ind./Canterbury H.S.) registered a double-double as the Crusader overcame 25 turnovers to earn the road win over a Panther team that entered the game 37-4 at home over since the midway point of the 2007-2008 season.

“We didn’t handle the ball like we wanted to which is something we need to get better at,” head coach Keith Freeman said.  “That said, I did see improvement in our rebounding, defense, and the way we competed though which is a big positive and helped us get a big win on the road.”

Valpo took an early 11-7 lead as the Panthers connected on just two of their first 12 shots from the floor, and maintained its advantage throughout most of the first half.  Ten Crusader turnovers in the first 13 minutes though limited the lead to just two, 17-15 with seven minutes to play.

A Laura Richards (Connersville, Ind./Connersville H.S.) triple with just under a minute to play followed by an Adams three at the buzzer gave Valpo a 31-22 advantage at the break.

Adams had 10 first half points while Gina Lange (Wyoming, Minn./Forest Lake H.S.) pulled down seven boards in the opening stanza.  The Crusaders outrebounded the Panthers 24-16 in the first 20 minutes, while holding Eastern Illinois to just 27.6% shooting.

The Panthers cut into the second half from the beginning, scoring the first seven points out of the locker room.  Four Crusader turnovers led to 10 Eastern Illinois points as the Panthers tied the game at 39 at the 13:53 mark, and one possession leader the hosts had the lead on a lay-in by Ta’Kenya Nixon.

The lead then changed hands eight times and was tied four more times as neither team could build an advantage of more than three points heading into the game’s final eight minutes.

A Rashida Ray (Fort Wayne, Ind./Harding H.S.) jumper as the shot clock was winding down gave Valpo the lead for good at the 7:25 mark, starting an 8-0 Crusader spurt.  The Brown and Gold’s defense held Eastern Illinois scoreless for 4:35 while building the 60-52 lead.

The Crusaders held a 62-57 lead with 2:49 to play when Ray was fouled shooting a three-pointer, and connected on all three from the charity stripe.  Valpo would not score the rest of the way, but allowed just one free throw on the way to earning the road win.

Adams led all scorers with her 20 points while Gerardot had 11 points and 10 rebounds for her double-double.

“Betsy Adams hits some big shots for us,” Freeman added.  “We got some big contributions from lots of people in lots of areas tonight.”

Lange also had 10 boards while Watts had seven more to go along with seven points as Valpo outrebounded Eastern Illinois 44-29 on the night.  Richards had eight points while Ray finished the night with seven as well.

“I think Watts helps us on the defensive end wth her physicalness,” Freeman commented.  “It will take time for her to get back to her old self though, but she gave us seven points and seven boards off of the bench.  She has changed practice for us because she is more physical.”

“We saw a lot of improvement tonight,” Freeman concluded.  “The big key for us to work on is to cut down on turnovers.  They outscored us 26-8 on points off of turnovers.”

Game Notes: Watts played 17 minutes in her first appearance of the season … Gerardot’s double-double was her fifth of the season … Lange tallied double figures in rebounding for the second time in her career, finishing just one off of her career high of 11 … the Crusaders shot 42.3% from the floor for the game … Valpo leads the all-time series 7-4 and has won three straight meetings between the two schools … this was the first meeting between the Crusaders and Panthers since Feb. 5, 1996.