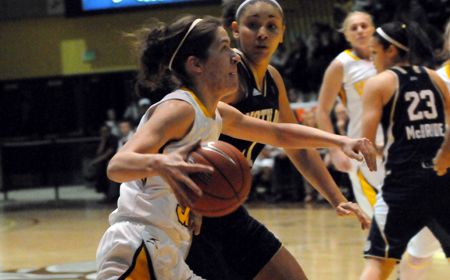 Gina Lange has already seen more than twice as many minutes this season as she did last year. (Ray Acevedo)
Valparaiso at Detroit | January 06, 2011
Related Links
Related Links

Upcoming in Crusader Basketball: Valparaiso continues is longest road trip of the season on Thursday evening when the Crusaders visit Calihan Hall to take on the Titans of Detroit.  The Crusaders are looking to rebound from their setback at Butler on Sunday in the Horizon League opener while trying to pick up their first win during the 2011 calendar year.

On the Air: Thursday’s game will be broadcast live on WVUR (95.1-FM, Valparaiso) as well as online at www.valpoathletics.com.  Chris Kleinhans-Schulz and Drew Taylor will be calling all of the action live from Hinkle Fieldhouse.  In addition, the game can be seen live online through the Horizon League Network.  Live stats will be available through www.valpoathletics.com for the game as well.

Head Coach Keith Freeman: In his 17th season on the Valparaiso bench, Keith Freeman has a 272-212 (.562) record at the helm of the Brown and Gold.  In his 23rd season overall, Freeman has a 401-259 (.608) career mark.  He is Valpo’s all-time winningest coach and has amassed more than half of the victories in the program’s history.

Series Notes: Valparaiso and Detroit are meeting for the 11th time in a series that dates back to 1989.  The Titans hold a 6-4 all-time advantage over the Crusaders and have won the last three meetings between the two schools.  Last year Detroit downed Valpo 72-70 in overtime at the ARC before posting a 67-49 win in Calihan Hall.  The Crusaders do hold a 3-2 advantage all-time in Detroit, including Valpo’s last win over the Titans, 70-65 in overtime back on Jan. 10, 2009.

Wrapping Up Butler: Four different scoring droughts of four minutes or more proved to be too much for the Crusaders on Sunday afternoon, as Valpo fell to the Bulldogs 61-49 in the Horizon League opener at Hinkle Fieldhouse in Indianapolis, Ind.  The longest spell of nearly eight minutes ended up being the difference as Butler turned a tie game into a 10-point advantage midway through the second half.  Betsy Adams led Valpo with 14 points as the only Crusader to score in double figures on the afternoon.  Brittany Bowen led Butler with 18 points.  The Bulldogs outrebounded Valpo 42-30 as well.

Scouting Detroit: The Titans have won three of their last four games overall following a 90-76 win at Milwaukee on Sunday.  Detroit is a perfect 4-0 at home this season, but has played at Calihan Hall just once since Nov. 19.  Seven different players are averaging at least seven points per game, led by Dominique Dixon who is scoring 11.0 points per night.  A 45.7% three-point shooter, Dixon scored 32 and 31 points last weekend against Milwaukee and Green Bay respectively.  Yar Shayok adds 9.6 points per contest and is second in the Horizon League pulling down 9.4 boards per night.

Cutting Down the Turnovers: Valparaiso committed just 13 miscues in the loss at Butler on Sunday, the second fewest in a game this season.  The Crusaders had committed 25 turnovers three days prior at Eastern Illinois, the fourth time this season the Brown and Gold had 22 or more in a game.  In fact, Sunday was just the second time this year Valpo had less than 15 in a game.

Timmerman Perfect at the Stripe: Ashley Timmerman made two more free throws on Sunday at Butler, and is now a perfect 13-for-13 at the charity stripe to begin her Crusader career.  Earlier this season the junior college transfer went 8-for-8 against Coastal Carolina, tallying the second most makes in the Horizon League this season without a miss in a game.

Crusaders Also Improving at the Line: Valparaiso is just a 67.7% free throw shooting team on the season, but the Crusaders have been much better in the two games following Christmas break.  Valpo shot 74.2% in the contests against Eastern Illinois and Butler, its second best two game stretch this year.  Against Coastal Carolina and IPFW the Crusaders connected on 84.6% (33-of-39).

Welcome Back Watts: Kelly Watts made her first appearance of the 2010-2011 season last Thursday against Eastern Illinois.  The fifth-year senior, who started 16 games at Valpo last year, has averaged 15 minutes per game in her two appearances thus far this season, averaging 5.0 points and 4.5 rebounds per contest.  She is shooting 66.7% (4-of-6) from the floor, with her only two misses coming from three-point range.

Shortening the Bench: Prior to Kelly Watts returning to the lineup, the Crusaders had gone about 10 players deep on the bench in nearly every contest.  With the addition of Watts, Valpo has played just nine players total the last two games.

Richards Gets to the Glass at Butler: Laura Richards pulled down six boards on Sunday at Butler finishing second on the team in rebounding.  It was the guard’s second best rebounding effort of the season, and ranks fourth best in her short two-year career at Valpo.

Just Another Double-Double for Gerardot: Tabitha Gerardot tallied her fifth double-double of her 13-game career after scoring 11 points and grabbing 10 boards against Eastern Illinois.  The freshman also has double-doubles against Cincinnati, Evansville, Coastal Carolina, and Chicago State this year.  The rookie is second on the team in scoring, at 10.5 points, while leading the Crusaders with 7.3 rebounds per contest, the ninth best mark in the conference.  Her five double-doubles are tied for the second most in the Horizon League.

Defense is the Key: Valpo has won all three of its games this season when holding the opposition to fewer than 60 points in a game.  On the year the Crusaders are surrendering 70.1 points per contest, but in the wins that number shrinks to just 55.7 per night.

Road Warriors: Valpo closed out 2010 and begin 2011 with its longest road trip of the season.  The Crusaders began the journey by wrapping up non-conference action with a win at Eastern Illinois before falling at Butler to open Horizon League play.  After Thursday’s game to Detroit, Valpo will close the trip on Saturday afternoon against Wright State in Dayton, Ohio.

Adams From Deep: Betsy Adams has already made 31 triples this season after making 64 last year to rank 10th on the single season charts.  The junior guard has made at least one trey in 11 of the 13 contests this season, being shutout against just Cincinnati and Notre Dame, when she attempted just one shot in each game.  Adams has 109 career three-pointers, just 10 triples shy of the all-time top-10 list in Crusader history.

Accepting Charity: After making just four of her first seven free throws this season, Betsy Adams has found her stroke at the charity stripe.  The junior guard has made 24 of her last 26 attempts, including her last 12 straight, beginning with the Lamar game on Nov. 20.  For the season Adams is connecting on 84.8% from the free throw line, the fourth best mark in the Horizon League.

Needing the Lead Early: Thus far this season the Crusader have not been able to overcome a halftime tie or deficit to pull out a win.  On the other hand, when Valpo has led going into the locker room, the Brown and Gold is a perfect 3-0.

Still Able to Rally for the Win Though: Despite needing the lead at halftime to win so far this year, the Crusaders showed they were able to come from behind in all three contests.  While Valpo led the entire second half against Austin Peay after trailing early in the game, the Brown and Gold came from nine points down with less than 12 minutes to play to post the overtime triumph against Coastal Carolina.  Valpo also rallied from behind in the second half to defeat Eastern Illinois.

Big Crowd for Notre Dame: Valpo’s crowd of 1,877 fans on “Pack the ARC” night against Notre Dame was the largest Crusader home crowd since the Brown and Gold hosted the Fighting Irish in 2008.  On Dec. 13, 2008, 2,046 fans saw the two schools separated by just 58 miles.

Super Woman: Betsy Adams never stepped off of the court on Dec. 8 against IPFW, playing all 40 minutes.  It was the first time in the junior’s career she had not spent at least one minute on the bench.  Adams’ career high for minutes played is 44 in an overtime contest one year ago at Detroit.

Adams Earns All-Tourney Honors: Betsy Adams was named to the All-Tournament Team at the Aces Classic.  She averaged 18.5 points and 7.5 rebounds per game for the Crusaders.

Freeman Earns Win #400: Head coach Keith Freeman needed five extra minutes on Dec. 4, but they were well worth it as the Crusaders’ come-from-behind win over Coastal Carolina, 59-52, gave him his 400th career victory coaching women’s basketball.  In his 23rd season on the sidelines, he entered the 2010-2011 season tied for 43rd among all active Division I coaches for career victories.  He has guided the Crusaders to more than 50% of the program’s victories all-time at Valpo and holds every one of Valpo’s coaching records.

This and That: Valpo has used the same starting lineup in all 13 games this season ... Tabitha Gerardot is averaging 9.0 rebounds per game since Christmas ... four Crusaders played 34 or more minutes at Butler, led by Laura Richards and Betsy Adams with 37 minutes each ... Ashley Timmerman scored seven points in just six minutes against the Bulldogs ... Gina Lange has already played 362 minutes this year after just 130 total last season ... Valpo was held without a three-point field goal in the first half at Butler, the first time this year the Crusaders were held scoreless from long range in a half ... the Crusaders’ four triples total against the Bulldogs were also a season low.