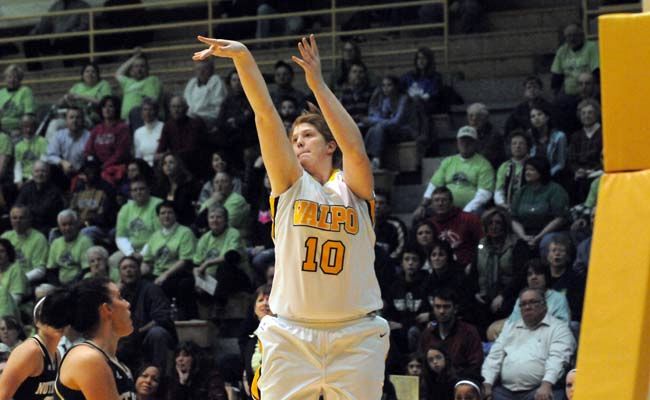 Valparaiso fell behind by double figures just five minutes into the game on Thursday evening and could never recover, dropping a 68-52 Horizon League battle to the University of Detroit Mercy at Calihan Hall in Detroit, Mich.

“I didn’t think for the entire game we played with much energy or passion,” head coach Keith Freeman said.

Detroit jumped in front of the Crusaders quickly as Cherridy Thornton knocked down four three-pointers in the opening six minutes to give the Titans a 15-2 lead.  The Valpo offense took awhile to get going, as the Brown and Gold made just four of its first 16 shots from the floor and committed eight turnovers while trailing 25-9 at the 7:39 mark.

“We didn’t start the game ready to play which was the problem in the first half,” Freeman added.  They trapped the ball screen and we didn’t handle the ball well.  We threw the ball all over the gym.  That’s execution, but at the same time we didn’t play with maximum effort.  That’s what’s frustrating.  I can handle the execution errors, but we need to play hard.”

The Titan lead swelled to 22, 34-12, at the 3:50 mark, as Detroit made seven first half triples.  The Crusaders fought back at the end of the half, going on a 9-0 run.  Four points from Gina Lange (Wyoming, Minn./Forest Lake H.S.) started the spurt and when Ashley Timmerman (Pontiac, Ill./Pontiac H.S.) made a three in the final minute, Valpo was within 13.  A late basket by the Titans made it 36-21 hosts at the break.

Valpo tried to cut into the lead early in the second half.  A triple by Betsy Adams (Monticello, Ind./Twin Lakes H.S.) followed by a Timmerman lay-in pulled with Crusaders within 11, 40-29.  Detroit answered though, scoring the next seven points to push the lead back to 18.

A Stefanie Lang (Valparaiso, Ind./Valparaiso H.S.) three followed by an Adams jumper got Valpo back within 12 again, 51-39, with just under 10 minutes to play, only to have the Titans again extend the advantage one last time, this time to more than 20 and the Crusaders could never recover.

Adams and Lang led the Crusaders with 15 points each.  Adams was 6-of-9 from the floor while Lang connected on 7-of-12 in 16 minutes.  Lang also had a team-high six rebounds.

Valpo finished the game shooting 34.5%, while Detroit connected at a 42.9% clip.  The Crusaders outrebounded the Titans 41-31, but committed 19 turnovers while the Titans had just 12 miscues.

Valparaiso (3-11, 0-2) will wrap up its four-game road trip on Saturday afternoon as the Crusaders travel to Dayton, Ohio to face Wright State.  Tip-off at the Nutter Center is set for 1 p.m. CST.

Game Notes: Lang’s 15 points and six rebounds were a career high … Adams made two triples and now has 111 for her career, eight shy of the top-10 all-time at Valpo … Adams has now made 13 straight free throws … Detroit leads the all-time series 7-4 and has won four straight meetings.