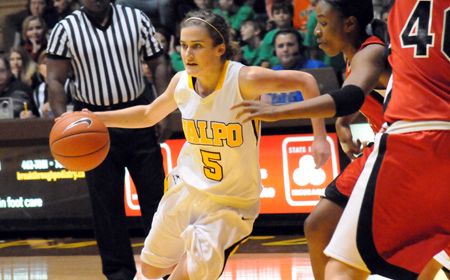 Betsy Adams (Monticello, Ind./Twin Lakes H.S.) scored 20 points for the fifth time this season, but was the lone Crusader in double figures on Thursday night as Valparaiso dropped a 61-55 decision to Youngstown State at the Athletics-Recreation Center.

Adams hit four of nine triples while finishing with 20 points in the contest but the Crusaders committed 19 turnovers which led to 25 Penguin points.  Valpo fell behind by double figures in the game’s first five minutes but were able to close within two during the second half as Youngstown State also grabbed 17 offensive rebounds in the contest.

“I felt we got beat in two areas tonight,” head coach Keith Freeman said.  “Our guards turned the ball over way too much and we lost points off turnovers by 15 (25-10).  Also, their two posts (Brandi Brown and Tieara Jones) got 14 offensive boards between them.  Our lack of an ability to box those two out along with handling the ball with sureness cost us.”

An early 11-0 run by Youngstown State gave the Penguins a 16-3 lead as Brown scored nine points for the visitors in the first five minutes.

The Crusaders battled back, utilizing a 10-0 run of their own to cut the deficit to three, 18-15, at the 6:40 mark as the Valpo defense held the Penguins scoreless for four-and-a-half minutes.

Youngstown State pushed the lead back to eight again before, 28-20, before the Crusaders made another late run, closing to within 30-26 at the break following an Adams triple.

Valpo cut the deficit to two, 32-30, at the 17:01 mark of the second half after four straight points from Tabitha Gerardot (Fort Wayne, Ind./Canterbury H.S.)., but that would be as close as the Crusaders would get the rest of the way.

Six straight points gave the Penguins an eight point lead again, and the advantage stayed between five and seven for most of the second half.  A layup inside by Gina Lange (Wyoming, Minn./Forest Lake H.S.) brought Valpo within three for the final time with 6:14 to play before Youngstown State against scored the game’s next four points.

“There were lots of possessions, even off of missed free throws, where they got two or three offensive rebounds,” said Freeman.

Gerardot and Lange both had eight points for the Crusaders, with Gerardot also pulling down nine rebounds.

The Penguins made 20-of-35 from the free throw line while Valpo was just 5-of-7 for the night.

“We fouled a lot which is a result of bad defense,” Freeman added.  “I felt like we were the second aggressor.  We don’t get fouled because we avoid contact and shoot fadeaways.”